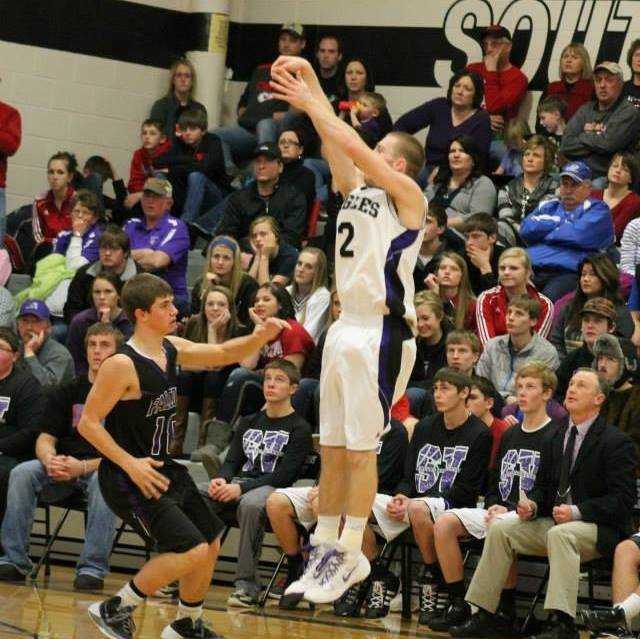 A couple of pretty cool matchups at 4 and 5:45 Saturday. Let's take a look at these games so you'll be prepared.

How about this matchup Tino Martinez lined up? A traditional C-1 power from the Northeast against a C-2 power from Central Nebraska. Both teams have speed to burn and love to run. D-T is coming off a state football title and the same superb cast runs the basketball show.

Doniphan-Trumbull has a very nice combination of inside and outside excellence. Jordan Slough handles the ball as the floor general and Lorenzo Williams, all 5-7 of him, is lightning fast on both sides of the ball and can drain the trey. The Cardinals are long and athletic with Creighton Buhr, Riley Wiltfong and Grady Koch. Buhr is an all-state type player that can hurt you inside or outside.

I'm not going to pull any punches, this Doniphan-Trumbull team can play football-like rough at times. Thing is, the Cardinals need not resort to that style to play well. They can kill you with a normal style of basketball and believe me, this team is good.

Creighton Buhr nearly averages a double-double every time out, scoring 16.3ppg and 8 boards. Football QB Riley Wiltfong follows with 11.6ppg. Jordan Slough, Lorenzo Williams and Grady Koch each add 7ppg, but it's Williams you had better not leave alone. He only hits 28% of his treys but they always seem to come in crunch time. Slough and Williams have 73 steals between the two of them and Slough is 7th in the state in assists. The Cardinals are outscoring opponents by an average of 58-44 per game. This bunch has the all senior line-up with the potential to add a state basketball title to go with their C-2 football crown.

Norfolk Catholic comes into this game on a wild roller coaster ride. The Knights will win a couple, then lose one, then win one and lose the next two. Catholic has a brutal schedule so this kind of a season can happen but it has to drive coach Shane Anderson crazy.

The Knights love to run more than any team you'll see. Once they pull down the rebound, it's off to the races with a high risk offense at times. No risk, no reward?

The Knights start a sophomore, 2 juniors, and 2 seniors but the substitutes are all underclassmen except senior Dylan Borer. Norfolk Catholic scores 50ppg and spread their scoring out well. Dylan Borer (#2) leads the way with 13.7ppg, followed by Beau Schommer (#24) with 10.1ppg. This team may be a year away from being great but have the talent right now to beat anybody in C-1. Catholic is athletic just like every football or basketball team they've ever had. Just ask yourself if you've ever seen a Norfolk Catholic team that didn't have tons of athleticism. I know that answer.

This should be a super match-up between two basketball teams capable of winning it all in their respective classes.

A game featuring C-1's 4th rated GICC Crusaders and defending C-2 champion and 4th rated Southern Valley Eagles. No, the Eagles no longer have 6'-9 Spencer Kucera, but the Oxford, Nebraska school has 3 key returnees and a great supporting cast making the trip to GI. Throw in the excellent husband/wife coaching tandem of John and Sandy Miller and you have a nice squad.

Southern Valley's only 2 losses have come to Class B Holdrege and C-1's Chase County and they have a win over Holdrege to balance one of the losses. This team can put the ball through the cylinder at at 58ppg clip while holding their opponents to 40. The Eagles love to bomb the 3's, especially senior Alex Kaup (#2), who has unleashed 150 shots from downtown, connecting on 50 of them for 36% accuracy. Southern Valley averages 18 treys a game and hits 33% of them.

Junior Hunter Quinn (#24) leads the scoring parade with 15.5ppg and not far behind is Kaup with a 13.2ppg average. If you thought Doniphan-Trumbull had a ton of steals, try Southern Valley on for size. The Eagles are 2nd in the state (of all reporting schools to MaxPreps) with 317 thefts (16.7pg). Only High Plains steals the ball more.

There are only 3 teams better than the Eagles in assists too. Southern Valley knows how to distribute the ball and will cause problems with their pinpoint passing with razor sharp skip passes.

Grand Island Central Catholic has a team that revolves around sensational junior post player Youhanna Ghaifan. The 6-4, 240 pound all-state defensive end might be the best inside player below the Class A level. Nearly impossible to guard 1 on 1, Ghaifan has college-type footwork rarely seen at this level. Triple teamed most times, Youhanna still has averaged 18ppg, 11 rebounds, and has blocked 35 shots to date. Ghaifan is tied for the state lead in shooting percentage with 74% accuracy and led most of the year despite sitting out nearly 5 games with a knee injury. The Crusaders have a deadly accurate 3 point shot artist in 6'-1 junior Johnny Rohweder. The slender Rohweder has connected on a gaudy 58 of 148 trey for a 39% average. Last weekend, Johnny Row sizzled on 13 of 24 treys on his way to 29 points against Class B Lexington and 24 vs. C-1 power Wahoo. Rohweder averages 12ppg followed by fellow junior Eli Hunter, who scores 8.2ppg. and plays QB on the hardwood. Defense features Phoenix Stevenson, who always draws the opposition's top player.

And of course the Crusaders still play the same suffocating defense they have always employed, holding opponents to 45ppg.

The Crusaders were blitzed in the Centennial Conference by Fremont Bergan (32-68) and Wahoo Neumann (29-72) but were without Ghaifan and Hunter. Wahoo found out you can throw those scores out when GICC sent them back east with a 74-67 loss last Saturday.

Another great C-2 vs. C-1 match-up you just can't miss. Besides, GICC may have one of the best dance squads in the entire state and you'll see them perform at halftime.

Game 7 will have Norfolk going up against a rapidly improving Kearney squad. You're going to marvel at the skills Norfolk's freshman and sophomore players display......and they are long and talented.

Tickets for this year's Heartland Hoops Classic are just $16 for adults and $8 for students and they are good for all day. A limited number of courtside seats for $70 dollars still remain.

Later this week I will list the probable starters for each team.