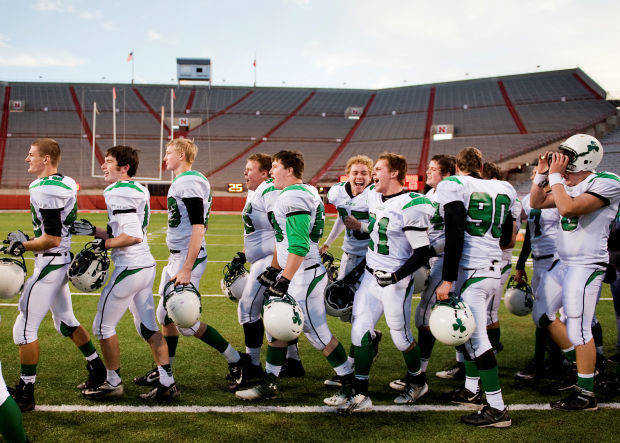 It was good to be an Irish from Falls City Sacred Heart in 2013 football. *(photo courtesy of Lincoln Journal-Star)

Not much drama choosing this position except that FCSH quarterback Chaz Dunn may have had an arguement due to the state title by the Irish. But how can you argue with Jackson Sudbeck's stats? His stats were like a college QB, completing 227 of 388 of his passes for 3,562 yards (59%) and 55 touchdowns with only 7 interceptions.....are you kidding me!

First of all you have to a little sentiment for Wynot having only 17 players on their team and a football field that slopes downhill in one direction with goal posts made of pipe and a board affixed to them for the cross bar. This is the same kid who keyed Wynot's state basketball championship a year ago. Sudbeck also rushed for 680 yards and scored 9 running TDs. Did he play defense......Oh yeah. Try on 56 solo tackles, 41 assists and 97 total tackles on for size. He also picked off 3 passes and caused 3 fumbles. Sudbeck also kicked off and sailed 11 of them into opponents end zones. How's that for credentials? Case closed.

A repeat selection from last season, Oltmer could have made it on either offense or defense. This fall Oltmer ran for 1,717 yards, good enough for 13th in the entire state. Most of J J's yards came right through the heart of opposing defenses. On defense, Oltmer was a high energy linebacker that that could rattle the bones of any ball carrier.

Might have to admit this young man is one of my favorite football players in the state. The love of my life is from Fullerton so that might have something to do with it, but Garrett Sonderup is one heck of a fooball talent and with some help may have a very special senior season. Sonderup is incredibly strong, has a low point of gravity when he runs, and is fearless at the point of contact. Garrett runs behind his pads like most fine college backs do and has tremendous speed to get to the outside and go. Fuuny thing about Sonderup is that most of his 1,559 yards came right up the heart of the defensive line. Very good on defense and a sure tackler. No brainer choice for me.

How about this guy? Yea, Stuart had a tough go in the finals against FCSH, but Kunz still was a shining star when you closely observed. Alex made the Broncos go and his stats prove that point. At the offensive controls, Kunz completed 50% of his passes for 1,382 yards and 17 TDs with only 3 INTs. Kunz played as if he were a running back and ran an ungodly 274 times this season for 1,746 yards and 34 TDs. On defense from his DB position, Kunz made 51 solo stops and 56 assists for a total of 107 tackles. One of the surest tacklers in the open field in all of 8-Man football. Kunz also intercepted 6 passes and knocked 7 others away. Could have made this list on defense too.

Tallest 6-1 offensive end I have seen in a long time. I'll bet this kid can do a 360 and flush a basketball through the cylinder with two hands on a reverse dunk. In 2013, Wieseler caught 95 of Jackson Sudbeck's passes for 1,798 yards and 23 scores. Every time Sudbeck threw a pass into coverage, it seemed like Davis Wieseler would just climb the ladder and make the grab no matter how tall the DB. On defense Davis had 56 solo stops and 51 assists for 107 tackles points along with an interception. Don't you just love these 2 way stars in 8-Man football.....Wow!

Somebody had to open the holes for Sawyer Keen and Chaz Dunn, plus pass protect for Chaz. Keithley is not that heavy for a player with a 6-4 frame but he is strong. On defense, Daniel had 77 tackles, which is a ton for a lineman. Also recorded 7 sacks. Give this dude lots of credit for Sacred Heart's state championship offense.

Oh my goodness, do not mess with this dude on the football field, especially on defense. As an offensive guard Harms opened the way for Landon Sweedburg's running and passing. At 210 pounds, Harms is about as strong as they come and his defensive numbers bear that out. Another player that could have made it on either side, Jeff Harms made an incredible 180 tackles, caused 3 fumbles and recovered 2 of those. Like Wynot, this team had only 17 players.......don't cha just love how these teams compete?

Let me tell you something Bubba, this kid played like a man. This Shelton Bulldog team suffered through some serious injury problems, yet Oliver still came through on both sides of the ball. Had he and Nate Muhlback (6-0, 260) stayed healthy this season, Shelton could have made some big noise in the playoffs. Nonethless, Oliver deserves all-state status.

Another perfect name for a kicker. Haraladidis was the king of all kickers in 8-Man football for the past 2 seasons. Yianni booted 80 of 87 XPoints this fall and made 2 of 6 field goals and it was not often FCSH ever had to even think about a field goal.

Not too difficult to find #29 on the football field this season. First player I noticed in the State Finals other than Alex Kunz. Even outmanned in the Sacred Heart game at Memorial Stadium, Ramm played like a man and left his mark on the Irish. This past season Ramm had a 128 total tackles and had 14 tackles for loss and 12 big sacks. Trevor also recovered 4 fumbles and made a habit of paying visits to the opponent's backfields. And no, he wasn't invited.

Ferocious blocker on offense and so very quick on defense. Better sit down for these defensive stats....Fiegener had 151 tackles on "D", recorded 19 sacks, intercepted a pass, recovered a fumble, blocked a punt and even helped some ball players back up after a drilling. Had 7 tackles in that State Final game. What a lineman.

Can you imagine what went through a QB or running back's mind when they saw Fiegener and Schwang staring them in the eye? Take a second look at Schwang's size....that's correct, 5-8 and 175 and a 100% pure tackling machine. I'll bet Doug Goltz would take a half dozen Brandon Schwang's every year at Sacred Heart. No wonder FCSH's defense was the King of D-2. Schwang recorded 131 tackles, had 7 sacks, pirated a pass and recovered 2 fumbles. #45 would even carry the ball occasionally. Brandon had 140 yards on the ground and had 5 TDs. Lateral movement as a backer was superb.

The King of all linebackers in D-2, Poppen would simply devour running backs on defense then help them up and pat 'em on the back. Garrett, a repeat selection for 2012, had 124 tackles and 12 for losses. On offense Poppen averaged almost 10 yards a pop while rambling for 1,150 yards and 17 TDs including a 68 yard TD jaunt. Not one person with a sane mind wanted to meet Poppen head on when he toted the pig. Way better than average speed and a low center of gravity made Garrett look like a runaway freight train as a ball carrier. Poppen also did the kick offs for the Hornets and averaged 40 yards a kick......it's an 80 yard field in 8-Man folks, I'll let you do the math.

Boy if Poppen wanted an all-star buddy at linbacker, Wenzl is the man...and a MAN he was. Tough customer for the Jets on defense this year and last. On offense, he ran for 1,474 yards this fall after 1,639 a year ago. Wenzl is just one of a long line of great football players for the Sterling Jets and Arlo Wusk.

I saw this kid play as a sophomore against a brutal West Point Guardian Angels CC team on a night so cold you spit and it would freeze before it hit the ground. Chrisman made some big hits that night and I knew this kid was a football stud. On defense, Chrisman had 79 solo tackles and 46 assists for a total of 125 tackles. In addition to 14 tackles for losses, 5 of Chance's powerful hits resulted in 5 fumble recoveries. On offense, Chrisman ran for 1,012 yards and 12 TDs and also had 150 yards receiving and a score. This young man is in for a monster senior season.

Could have been all-state as a quarterback OR a RB on offense. On "D" Brehmer has 61 solo tackles, and 62 assists for 123 total tackles. Also picked off 4 passes, one of which was a 58 yard PIK-6. On offense I'm pretty sure Brehmer started at quarterback Every single game since his freshman season and they can't play before that don't 'cha know. As a QB, Alex Brehmer threw for 844 yards and 17 TDs with only 5 INTs. As a runner, he rushed 184 times for 1,811 yards and 27 TDs. I'm betting that Brehmer was the choice of most coaches as their QB on those all-state ballots.....he was simply that good.

I'm wondering if Brehmer's buddy Dakota Reiken is on anyone else's All-State list? Guarantee you he is on mine. Wanna know why? 71 solo tackles, 104 assists equals 175 tackles....and 18 were in the opponent's backfield. Dakota also picked off 2 passes and pounced on a fumble. On offense, he was by far the leading receiver for the Cougars with 441 yards on 26 catches and 8 TDs. Yeah, this dude is on my all-state team...never a doubt.

Ok, so Hinrichs only punted 5 times, but he averaged 38 yards a boot and that's good enough for 8-Man. BUT, Hinrichs just happened to be the man that made the Hornet's offense go and he started out the season at wide receiver. After one contest, the opening season loss to BDS, Jeff Ashby switched the talented Hinrichs to QB and never regretted it. Ben Hinrichs completed 96 of 147 passes for 1,531 yards and 27 TDs with only 4 INTs. And no, they weren't all short passes. As a runner, Hinrichs was so dangerous, rushing for 1,066 yards (9/carry) and 17 scores. On defense, Ben had 80 stops, 2 sacks, 2 recovered fumbles and an interception. Just couldn't leave this guy off all-state, besides Garrett Poppen might get me.