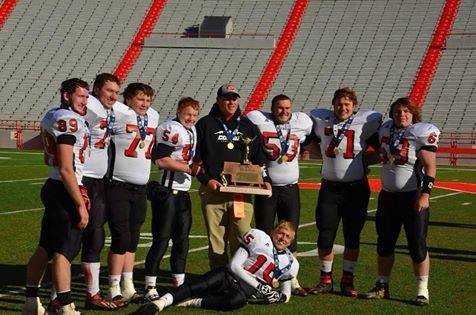 The Cardinal's signal caller and Houdini like runner, could pull of the finest "now you see me, now you don't" act in C-1. You had to see Mazour perform to believe it. #20 completed 105 of 172 passes (61%) for 1,608 yards and 11 TDs with 6 INTs. Mazour also rushed averaged 7.44 a carry while running for 1,228 yards and a whopping 24 TDs. All these offensive stats came in just 10 games. Mazour suffered an injury toward the end of Boone's season and missed 3 games but came back to take the Cardinals to the semi finals. Had 553 yards on kick and punt returns and took 3 of those back for scores. Mazour also intercepted 3 passes from his defensive back slot and made 19 tackles. Incredible player who suffered an ankle injury in the Cozad semi final game which may delay his basketball debut.

You could write a book about Jake "The Snake" Paulsen. One of the state's premier sprinters, he turned his blinding speed and superior vision into 2,534 yards and 29 TDs, plus a State Championship for the Hayhmakers. A three time 1000 yard rusher, the blond, jet propelled senior could accelerate to full throttle, yet still execute nimble moves that left defenders with empty arms. There wasn't a player in C-1 who could catch Paulsen once he blew into the open field. In 4 years st Cozad, Jake Paulsen rushed for 5,597 yards in his illustrious career and ran for 73 touchdowns. Became stronger every season he played and was tough to bring down this past season. Paulsen's career total of 5,597 yards ranks him 10th on the all-time list and his senior rushing mark of 2,534 ranks him 10th on the single season rushing list. Special player and even better human being.

Without a doubt the toughest runner in C-1. A 1000 yard man a year ago, Love battled through an injury this fall and still managed to blast his way for 1,709 yards on the ground for the Knights. With an increased workload in 2013, it seemed like Love actually relished the challenge and turned in outstanding performances game after game. Also a ferocious defensive player from his LB position, Love made you remember him with his sticks. One of the state's elite backs along with Paulsen.

Chiseled like granite and faster than blazes, Niederklein stepped in as the Patriots go-to ball carrier and responded with 1,665 yards and 25 touchdowns. On defense, Niederklein logged 48 tackles and recovered a fumble for the stout Patriot defense. Had nearly 200 yards against the stellar Cozad defense in the season opener, demonstrating how good this senior really was against a top foe. Held under a 100 yards only once and that was in a 49-0 blowout win when The Buzzer played sparingly. This guy is an excellent small college prospect.

The 5-10 Chicoine played wide reciever like he was 6-5. Favorite routes were the fade and the slant. Chicoine had nearly 1,200 yards receiving and 17 TDs for the Crusaders. Fearless when he went for the catch, Chicoine started every game for Christian since he was a Freshman. So many highlightg reel catches.

One of the right side of the Haymaker line that cleared the way for Jake Paulsen and Colin Wetovick. Rangel was also a beast on defense, 53 tackles, a sack, a caused fumble and 4 tackles for losses. Nearly impossible to move on defense from his end spot.

Bigger of the two bruisers on the right side of Cozad's offensive "Operation Steamroller" line. Big Jake had 48 tackles on defense from his nose tackle slot and caused 4 fumbles and recorded 3 tackles behind the line of scrimmage. Also took a double team to move him on defense. He and Simon opened the truck like holes for Jake "The Snake".

Tell you what, Matt Clark seems like a sure fire D-1 prospect to this guy. Only a junior, Clark crushed defensive lineman with 60 pancakes and ate running backs for lunch on defense. Clark had 84 tackles on defense, 6 of which were for losses and recorded 4 sacks. Clark also caused 1 fumble and even pick off a pass. What a player for the Rockets.

Kelly was all over the field in the state finals against Cozad despite the loss. Eric had an incredible 146 tackles, 3 sacks, and blocked a field goal. Always around the ball on defense, Kelly was a menace to opposing defenses and was a fine pass protector and run blocker on offense.

Two way standout for the Cardinals, Wiese opened the holes for Wyatt Mazour and followed a great junior season on defense with an even better senior campaign. Wiese was in on 62 tackles, 8 of which were for losses. Maybe the Cardinals best 2-way line player.

Was a sparkler in the Cozad state final game when nothing else worked. Had 10 receptions for 174 yards and an absolute highlight reel 51 yard touchdown reception in that contest. Only a junior, Craven had 74 receptions for 754 yards and 10 TDs this season. On defense Tyler intercepted a pass, knocked away 4 passes, recovered 3 fumbles, blocked an extra point and a field goal. Can't wait to watch this guy next season.

Not much this young man couldn't do for the Crusaders this season on the gridiron. As a QB passed for over 2,100 yards, rushed for nearly 800 yards and was a force on defense. One of Class C-1's most versatile athletes.

Might just be one of the deadliest field goal kickers in the entire state, hitting 9 of 12 this season. Zimmerman could put 'em through the uprights from over 40 yards on a regular basis. Had fine speed and rushed for 418 yards as a RB and scored 5 TDs for the 'Rocks. Also had 39 tackles on defense and nailed 15 of 18 extra points for Scotus. And remember, this kid's only 147 pounds.

Had 49 solo tackles and 41 assists for 90 total tackles for the Broncos. As a tight end, Heine grabbed 28 aerials for 472 yards and 3 TDs. Flew under the radar to many this season, but make no mistake about it, opposing coaches knew who Andrew was.

This dude DID NOT fly under the radar. Krueger had been making opposing team take notice for 2 years now. Try this on for size...Coach Mark Brahmer told me Charlie Krueger was the best OFFENSIVE and DEFENSIVE lineman in Pierce history. So tell me, how does a defensive tackle get 91 stops? Krueger did just that and was a blocking machine on offense.

Hartline was the head honcho in the Pioneers 4 linebacker set and was just plain and simple a pure football player. Hartline packed a punch when he hit you and had to lead Class C-1 with a 119 SOLO tackles. You heard that right.

This guy could play Class A football, I kid you not.

Lord in Heaven how much better can you get than this guy? 115 tackles from his linebacker slot and was absolutely the best blocking fullback in the state regardless of class. Boryca could have had 800 yards rushing if he would have had the shot. Alex Boryca is Super State material if I ever seen it.....so is Paulsen. Boryca also could have played on any Class A team in the state.

Can't get better blood lines than this guy. This lad DID lead Class C-1 in tackles, recording an astounding 206 tackles. Had 10 tackles for losses, intercepted 3 passes and recovered 2 fumbles. On offense, Kitrell bulled his way for 578 yards and 10 touchdowns. A fierce blocker for QB Garner and Freshman sensation, Trevor Nichelson (668 yds).

#44 did it all for the Cavaliers. On defense, Sabatka logged 101 tackles, 43 solo and 58 assists. He also intercepted 1 pass and recovered a fumble. Colin carried the ball 136 times on offense, rushing for 978 yards (7.2/carry) and hit the end zone 10 times. Sabatka also caught 7 passes for 101 yards and a score. #44 was one of the reasons Bishop Neumann was 7-4 and if you think he was good in football, wait until you see him on the hardwoods.

I saw Dewald up close 4 times this season and take it from me, he may be the best in C-1 pound for pound as a LB. Dewald had a built in radar chip for finding the ball on defense and when he did, #28 laid the wood to ya. Dewald registered 84 tackles for the Vikings and was a pretty hard running back when he spelled Jarecke on some plays. Dewald added 387 yards on 72 carries and scored 7 TDs. Also caught 9 passes, one of which was a touchdown. This guy was 165 pounds of pure passion when he played linebacker.

#1 was a true leader for the Bluejays on both sides of the ball. Led Class C-1 with 6 interceptions from his DB slot. Had 50 tackles and directed traffic for the Pierce defense. On offense, Rohrich was the quarterback and took things into his own hands when the Bluejays weren't moving ther ball. Rohrich completed 56% of his passes for 768 yards and 6 TDs. Also rushed 100 times for 724 yards and a couple more scores.

Conor "Golden Hands" Young was one of my favorite players in C-1. Always, always came through with a big play when the Haymakers needed it. Young tied Rohrich for interceptions in C-1 with 6, but all of Conor's came in the playoffs. He had one against Minden in the 1st round, 1 against Gothenburg the 2nd round, then picked off 2 in the semis against Boone and had 2 in the state finals against Ashland-Greenwood. Recovered a fumble in the Adams Central game and and caught 3 passes, all circus catches, for 98 yards. Golden Hands ended up with 50 tackles on defense, caught 19 passes for 509 yards, an incredible 26.79 yards a catch and scored 7 TDs. Also carried the ball 7 times for 107 yards, 15.29 yards a carry. You get the picture on this guy.......and he's just a junior.

Gunnar Garner made the Bluejays go and led them all the way to the finals in C-1. #8 was a double 1000 yard player, rushing for 1,181 yards and 11 TDs and passing for 1,668 yards and 18 more scores. On defense, he had an incredible 125 tackles from his DB spot, unusual for a deep back. Garner also picked off 3 passes, broke up 4 more and caused 2 fumbles with his solid tackling. Do it all player for the State Runner-Up Bluejays.

Part of a Lakeview duo that COULD NOT be left off the All-State list. Jarecke, one of the state's premier 100-200-400 meter men, rushed for 1,266 yards (8.73/carry) and scored 17 rushing TDs. #40 also had 301 receiving yards and 3 scores and was, without a doubt, the most dangerous return man in C-1. Jarecke had, are you sitting down, 844 yards on kick returns and 303 more returning punts. On defense he had 58 tackles and refused to let anyone get outside if he had the chance to stop them. Also had an interception and broke up 4 passes. Averaged 34 yards a kick return and 24 per punt return.....Wow.

Jarecke's buddy, Jack Shadley was Class C-1's most prolific passing QB's the last 3 seasons. This season Shadley threw for 1,685 yards and 24 touchdowns with only 7 INTs. The past 3 seasons, the sharp shooter passed for 5,573 yards and 61 touchdowns. Impressed yet? And football may not be his best sport (See basketball!). On defense Jake did not play every down at all and still recorded 23 tackles, intercepted 3 passes and recovered 2 fumbles. Oh yes, and he did the punting. Shadley's punts didn't go a mile down the field but they certainly went a mile in the air, that's hang time, folks.