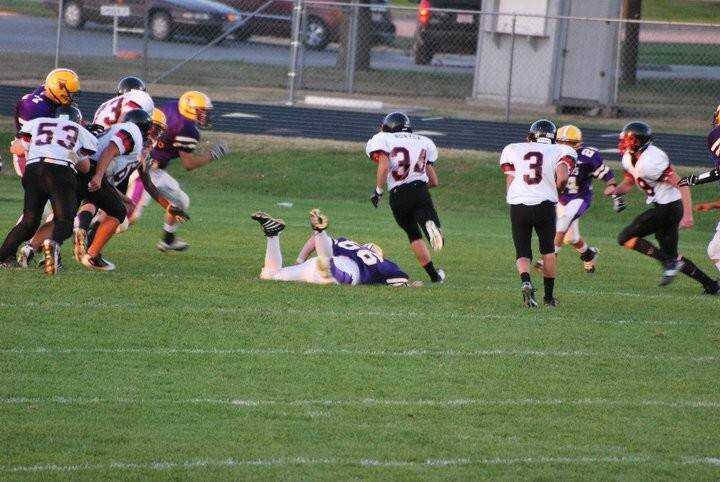 Cozad's Alex Boryca (#34) mows down a defender and looks for another.

Cozad's Haymakers put a hush on the strength of schedule chatter and dominated the line of scrimmage to post a 35-7 win over unbeaten and #1 Boone Central/Newman Grove Tuesday afternoon in Cozad. The impressive win sends the Haymakers to Lincoln for a date with Ashland-Greenwood in the Class C-1 finals next Tuesday morning at 10:15. As usual Cozad relied on big plays, a staunch defense, and the outstanding running of sprint/football sensation Jake"The Snake" Paulsen. In fact, the defense was so stifling that an excellent Boone Central offense had a total of 37 yards the entire first half.

The trip to the State football finals will be the first to Memorial Stadium in Lincoln for Cozad and the first since 1991 when they defeated Elkhorn 17-7 for the Class B crown on a cold, bitter night in Cozad.

The Haymakers took their opening drive and advanced all the way to the Cardinal's 11 yard line before senior Tysen Werner's 29 yard field goal attempt sailed wide left. The Haymakers ran 14 plays and took 6:22 seconds of the clock and set the tone for the game. All season long Cozad head coach Brian Cargill has preached that patience will bide time for the big plays to start developing. Tonight that is exactly what transpired.

Each team had only one possession in the opening quarter and it looked like a low scoring, chess match type game was developing. It was a scoreless contest until 3:30 left in the half when Jake Paulsen took a handoff from Nate Buback, swept left and followed fullback Alex Boryca and turned on the :10.5 jets for a 47 yard TD jaunt. Werner coaxed the point through the uprights and Cozad led 7-0.

Let me interject something here. #34 Alex Boryca has to be the absolute finest blocking fullback in the state in C-1. In addition to being an all-state type linebacker, Boryca also has the deceptive speed to break a long touchdown run. Maybe we'll see it in the C-1 Finals. This young man is the real deal.

Two plays after the Haymakers scored, Conor "Golden hands" Young picked off the first of two Wyatt Mazour passes and returned it to the Boone 46. The very next play QB Nate Bubak nailed a streaking Conor Young with a perfect 33 yard strike that carried to the Cardinal 21. Paulsen then ripped off a 19 yard run to the 2 yard line, then blasted into the end zone standing up to give Cozad a 14-0 halftime time.

I might add here that Wyatt Mazour, the magical quarterback for Boone Central, appeared to be hobbled after being bent backwards in a pileup after a short gain in the first half.

The Cardinals came out breathing fire to open the second half. Taking the ball on their own 20, Mazour took turns handing the ball off to the hard running Brugger brothers (Joseph-#28, and Matt-#48) advancing the ball all the way to the Cozad 19 yard line. Mazour then rolled right, launched a pass intended for ace wide receiver Derek Gentrup, but Conor Young again stepped in front and picked off the pass, extinguishing the drive at they Haymaker 3. Following the intercepton, Jake Paulsen carried the ball 4 straight times, breaking runs of 3, 8, 36, and 12 yards to the Cardinal 38. With Paulsen then taking a breather, speedy Colin Wetovick gained a yard on his first touch, then flashed his sprinter speed by taking a pitch around right end, bolting 37 yards for a score. With Werner's point after Cozad had a 21-0....6:33 left in the 3rd. Boone had to score here or things would have slipped away.

That pulled the Cardinals within 21-7 with 2:49 remaining in the 3rd quarter.

Following the Boone score it took only three plays before Cozad applied a backbreaking TD. After Paulsen advanced the ball from Cozad's 37 to the Cardinal 48, Nate Bubak dropped back to pass. The Boone defense applied a fierce pass rush, flushing Bubak out of the pocket. But the smooth senior merely ducked under two would-be tacklers, took two steps toward the line and fired a perfect bullet to Conor Young who was streaking across the middle full boar. Young caught the ball in full stride and easily outran the secondary for a 48 yard TD reception. The Haymaker Stadium scoreboard then read 28-7 with 1:49 left in the 3rd and the strangle hold had been applied.

The Haymakers tacked another score on in the 4th quarter when Paulsen ripped through the middle of the Boone line for an 8 yard, standup touchdown. Key play in the drive was a 22 yard aerial from Nate Bubak to Conor Young.

Cozad's defense refused to bend in the 4th quarter and reserves from both squads played the final 5 minutes of the semi final match-up.

Jake Paulsen once again led the way for Cozad with 246 yards on 33 carries and 3 touchdowns. Paulsen had already amassed 146 yards by halftime. Paulsen, who does not play a ton of defense, put a bone crushing tackle on a Boone Central receiver in the 4th quarter, then helped him up. Quarterback Nate Buback, who throws only about 7 times a contest, connected on all but 2 of his 6 throws for 108 yards. Conor "Golden Hands" Young caught 3 of those for 103 yards and a touchdown, adding to his 2 interceptions.

Junior Colin Wetovick, who should be Cozad's next 1000 yard rusher, danced 13 times for 118 yards and that 37 yard TD jaunt.

Joseph Brugger led the Cardinal running game with 87 yards on 13 touches. The suffocating Cozad defense held sure-fire all-state quarterback Wyatt Mazour to 10 yards on 14 carries. Mazour could complete only 4 of 13 passes for 17 yards and suffered 3 interceptions. Boone Central/Newman Grove, who entered the contest a perfect 11-0, ends a fantastic season with the lone defeat.

Some observations: If anyone outside of the boys in the black Haymaker uniforms told you this was going to happen would probably have been spinning a little yarn. Yours truly knew how good Cozad was, but I also had seen Boone play twice this season and was pretty well convinced they were the team to beat in C-1.

The Cozad line play was absolutely outstanding on both sides of the ball and their team speed is better than anyone in C-1, hands down, and Boone Central has tons of speed. This group of Haymaker seniors has State Championship written all over it.

Hats of to Boone Central/Newman Grove: What a football team, turning back every team in the magic circle despite losing key players Derek Gentrup and Tyler Hedlund for most of the season. The splendid duo worked diligently and finally made it back to contribute to last week's 34-16 win over powerful Norfolk Catholic. This Cardinal team is one heck of a top notch football squad and QB Wyatt Mazour is one of the most magical athletes you will ever see......and is only a junior. This is also a young and very deep football team that will be making huge noises next fall.

And about these Haymakers: Mull over this for a moment. I spoke with some pretty smart Boone Central football people tonight and was told that no opponent came close to executing the line play

against their team like Cozad applied tonight. Think about that. We're talking about a pretty good football team when we are discussing Boone Central/NG. These Haymakers beat one of the best around and took victories from two of the best from the vaunted "Magic Circle" in Boone Central/NG and Pierce. What an outstanding job first year head coach Brian Cargill has done with Cozad. Brian is the defensive coordinator and you saw what transpired tonight.

This was billed as the 'Dream match-up", the real State Championship. So will Cozad have a let down next week in the Finals against Ashland-Greenwood? Do not say that is absurd thinking because I have seen it happen more than once, but I just cannot see that happening to this Cozad football football team. I saw two teams early in the season that seemed to have that magic camaraderie and cohesiveness to take them all the way to Lincoln. Those two teams were Cozad and Class B York.

Next week we find out.