A Comeback for the ages lifts Wynot to quarterfinal win. 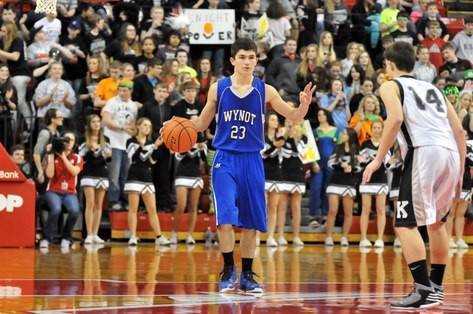 Giltner - For the past few years I've wondered what would transpire if Giltner had to face a mirror image of themselves on a football field. I found out Tuesday on a crisp, sunny autumn afternoon when a Wynot team brought their Jackson Sudbeck Aeriel Extravaganza to town. The Blue Devils, all 18 of them, hooked up with the defending D-2 champions from Giltner and prevailed when it was all over after a back and forth battle with a story book ending.

Just when it appeared Giltner had punched another ticket to the D-2 semis, Sudbeck and his Air Show buddies staged a furious comeback executed with pin point time management and deadly accuracy. Mix in a little magic on a 2 point conversion with 14 ticks left and you have a spectacular 52-50 Wynot victory over Giltner. It almost seems fitting that the defending Class D-2 basketball champions win a football game by a final count that resembled one of the Blue Devils' hoops scores.

I knew the Hornets were in for a game when Wynot received the opening kick-off and marched 65 yards to score on an 11 play drive that consumed 3 minutes 57 seconds. Giltner answered right back on their 2nd possession, which took only 3 plays, setting the stage for a back and forth battle that resembled a heavyweight title fight. Two of the best gunslingers in 8-Man football matched arms and legs to put on a high school football show that rivaled a state finals match.

Give Giltner credit, the Hornets had to overcome the offensive loss of 1000 yard rusher Garrett Poppen, who broke his left thumb on the first series of the game. Also missing was 175 pound lineman Justin Joyce, who was out with an injury. Poppen would return in the 2nd half to play defense only, but sophomore Christian Leichty (173 lbs) stepped in for Poppen and responded with 140 yards and a couple of nifty touchdown runs of 52 and 21 yards. But it was the invaders from the North that kept responding when faced (twice) with a 2 touchdown deficit.

Giltner took a two touchdown lead with 3:23 left in the half when Leichty took a pitch, swept left and skirted the Hornet sideline 52 yards for a TD. That gave Giltner a 28-14 lead. But Wynot fashioned a beautiful drive that featured some hard running by 185 pound Brady Stratman and a key 4th and 2 pass completion from Sudbeck to splendid split end Davis Wieseler. Wieseler grabbed a 20 yard throw from Sudbeck to advance from the Giltner 39 to the 19, then following an incomplete pass, leaped high in the air to catch a 19 yard touchdown pass with only 6 seconds left in the half. That cut the Hornet lead to 28-22 after Sudbeck again found Davis Wieseler for the 2 point conversion.

Wynot scored on their opening possession of the 2nd half to take a 30-28 lead and the back and forth touchdown parade was on. The Hornets regained the lead with 42 seconds left in the 3rd when junior QB Ben Hinrichs found former QB Jared Hastings for an 8 yard TD. The Hornets had a 44-38 lead entering the money quarter.

Both defenses stiffened in the 4th quarter and it appeared Giltner was ready to put it away when they stuffed Wynot on three straight plays after the Devils had driven to the Hornet 3 yard line. Giltner then scored on a spectacular 44 yard scoring dash by Ben Hinrichs, and it looked more and more like the home town Hornets may have put it away with the 50-38 cushion.

After watching Giltner put away opponent after opponent for the past 4 years, I thought it might be over when Jared Hastings pirated a Jackson Sudbeck pass at the Giltner 12 yard line with 3 minutes and change left in the quarterfinal contest. In vintage Giltner football fashion, the Hornets chewed up those 3 minutes and elected to punt the ball away facing a 4th and 2 at their own 30 yard line.......time remaining.....1:47.

This is where it gets interesting folks, so fasten your seat belts because you're heart rate is going to go up.

So, Wynot gets the ball on their own 11, looking into a 69 yard eternity with the clock.....and the season reading red alert. Enter the 2 minute offense genius Jackson Sudbeck and his fearless, witty head coach, Steve Heimes. It took only 4 ticks less than a minute for Sudbeck to drive Wynot those 69 yards, including a "hold your breath, it's a long way back to Wynot with a season ending loss sigh" fourth and 10 strike from Sudbeck to Clutch Man Davis Wieseler. #9 then hit powerful running back Brady Stratman with a 10 yard TD pass.

The only choice was an onside kick and the Blue Devils executed and recovered. Jackson Sudbeck staged his finest John Elway two minute drill routine and drove his team down the field, nailing Stratman with a 9 yard TD with only 14 seconds remaining. With the game tied at 50, Wynot's Sudbeck faded back, launched the football into triple coverage where Tristen Wieseler finger-tipped the ball right into the waiting hands of 135 pound freshman Dawson Sudbeck who did his best Jordan Westerkamp Hail Mary catch routine.

Jackson Sudbeck, who looked like the best QB in 8-Man football, completed 27 of 46 passes for 382 yards and 5 touchdowns. That gives the senior 50 TDs through the air for the season thus far. Sudbeck also ran for 113 yards 2 scores. Sudbeck's favorite target, Davis Wieseler, who jumped like he was 6'5", caught 12 passes for 210 yards and a TD. Running back Brady Stratman had 11 catches for 136 yards and two critical late Tds.

Ben Hinrichs led the Hornets, who finish their season 9-2, with 180 yards rushing but only 107 yards through the air. Both teams amassed over 400 total yards each.