Adams Central offensive line comes alive in second half to key a 22-7 win over Chadron. 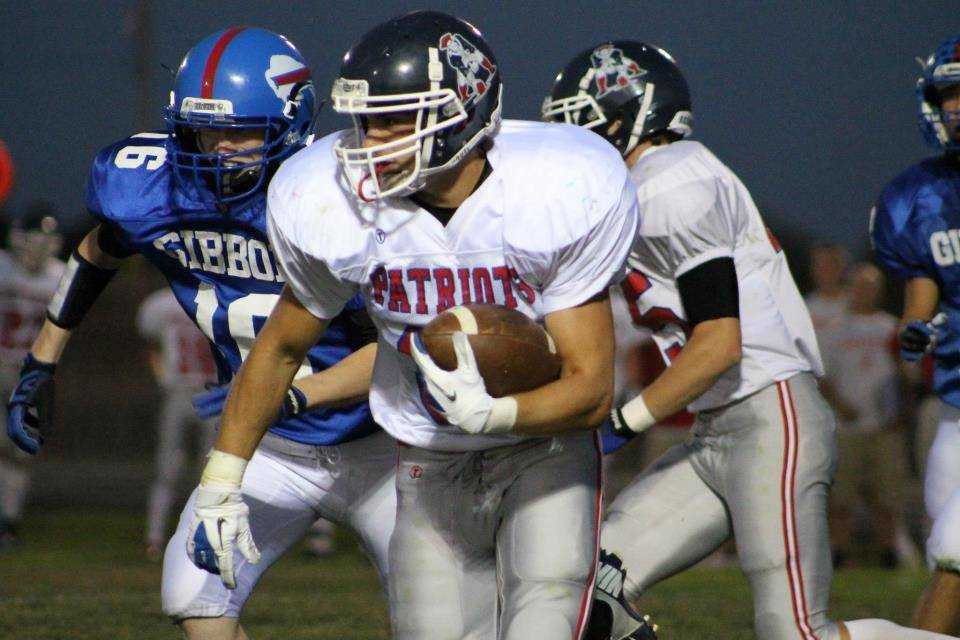 Adams Central Head coach is a master at making adjustments at halftime, but I have a feeling no changes were needed yesterday as the Patriots O-Line came alive, stayed on their blocks, and enabled running back Buzz Niederklein to run for a game high 142 yards and 2 second half scores. Down 7-0 to a very good Chadron team, Adams Central came out for the second half and ran the same formations with Niederklein running to the right side B and C gaps. The result was a hard fought 22-7 win over the Cardinals in the first round of the Class C-1 playoffs at windy Adams Central.

Chadron came in with a balanced game plan that saw senior quarterback Tristin Stein complete 8 of his first 10 passes for 77 yards and a touchdown. Possessions were at a premium in that first half with both teams getting only 3 the entire 24 minutes. After a scoreless 1st quarter, the Cardinals fashioned a 16 play, 80 yard drive that culminated with Stein nailing Matt Cerney in the right corner of the end zone from 11 yards out. The Chadron defense was a stubborn crew to say the least, limiting 1,400 yard rusher Buzz Niederklien to 50 yards on 13 touches in that 1st half. Niederklein earned every yard of that with the Cardinal defense keying on the sure-fire all-state running back and swarming to #30 every time he took the handoff.

Chadron took a 7-0 lead to the locker room at intermission and I could just imagine what adjustments Bill Carlin was making offensively.

No alterations needed as the Patriots came out and proceeded to drive 77 yards on 13 plays with Niederklein carrying 7 of the first 8 plays for 46 yards. Bruising FB/LB Jack Berry got the honors on the final play of the drive and took it in from 3 yards out. A penalty on the play allowed A/C to begin the point after try from the 1 and a half yard line and Niederklein was money on the 2 point conversion run. Adams Central took it's first lead (8-7) at 7:35 of the 3rd quarter and never relinquished it.

The Patriot defense stiffened, T.D. Stein was limited to 3 of 14 passing for 22 yards and an interception and Chadron just couldn't get things going to make a comeback. The Cardinals had the wind in the 4th quarter, but the few passes that semed on target sailed just out of the fingertips of well covered receivers with the strong tailing wind.

The Patriots, leading only 15-7 after three could have widened the lead for a little breathing room, but Chadron defender Jackson Dickerson came up with a touchdown saving interception in the end zone to halt the drive. But it was the all around play of the entire Adams Central defense the came through in that second half that made the difference in the closely fought battle. The Patriots added an insurance touchdown with a little over a minute remaining on a 3 yard Buzz Nierderklein run that made the final count 22-7.

As previously mentioned, Niederklein led the way on the ground for the Patriots with a 141 yards on 32 carries. Junior QB Dylan Steinkruger attempted only 6 passes in the game for A/C, completing 4 of those for 26 yards. He did suffer an interception. Fine junior RB Jackson Dickerson led the Chadron Cardinals with 71 yards on 10 touches, leaving him short of the 1000 yard mark with 947. Chadron QB Tristin Stein finished the game with 11 of 27 passing for 99 yards and 2 picks. The talented 3 year starter threw for an unofficial 4,335 yards and 44 touchdowns in last three varsity seasons, including 1,464 (88 0f 178) this fall. Stein's father, Chris Stein, is the offensive coordinator for the Chadron State football team.

Adams Central moves on to play Norfolk Catholic next Wednesday at Memorial Park in Norfolk. That game will be part of an outstanding double-header playoff billing with kick-off slated at 3:00. The nightcap will feature a C-2 quarterfinal matchup between Norfolk Lutheran High NE and Hartington Cedar Catholic. Chadron ends the season with a 6-3 record.