Once a Bonnie, always a Bonnie - Part 2 & Conclusion. 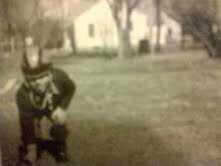 The boy that dreamed of being a Bonnie.

Telling a lie would be wrong if I told you the nerves weren't shaky and the butterfiles were not swirling in my stomach when I turned down the street that led to my childhood home in Columbus. I had to go through the old downtown area on 11th street about a half mile from my house. My heart dropped when I saw all the empty buildings on that once bustling "Main" street. Only thing that was still there was Glur's Tavern. When I arrived at the corner of 18th and 11th, my old house on the northwest corner was barely familiar. Wasn't the same. The house next door where my uncle El and Aunt Leona once lived was a different color and not familiar either. Never imagined it would be this way. I kept telling myself...that was 50 years ago.

I parked my car there and walked the same route I used to take to St. Bonaventure grade school when I was 10. It all looked the same. Seemed like I was in a time warp, this is what I was reaching for. As I walked back to retrace my steps, the feeling was still inside. Now I would drive to the high school. Would that still be the same as I remember 50 years ago?

The outside look vaguely familiar, but the entrance was not there. I moved down to a door I never knew existed and rang the bell....this was it. They buzzed me to come in. Things did not look the same but there was hope. Maybe I was just in the wrong wing, after all the lockers looked dated and above them were the stations of the cross. Yes, the stations of the cross. Never saw that in a high school in my life. I swear I had seen those stations somewhere before.

I walked to the office and asked the secretary some historical historical questions about the building and she directed me to John Schueth, the Scotus Development person. That is when it all became clear. Mr. Schueth did a masterful job of taking me through the history of the school buildings, front the time it was built to the present............nothing remained that I remembered.

Did I expect there to be anything after 50 years?

Head football coach Roger Krienke greeted me and briefly showed me around. Future Hall of Fame volleyball coach John Peterson stuck his head out the door, greeted me and looked at my St. Louis Cardinals jacket, "Should have been the Tigers and the Cardinals in that World Series, Bobby." Coach Kreinke walked further and I asked him if Scotus had two gyms. Yes, and one of them was built in the early 60's.....bingo. We walked up a few stairs and there it was. The gym where I had been in 1964. The stage with the green curtain. Directly below was the cafeteria that was also there in 1964. Maybe I will get those feelings after all.

The Scotus players broke up into groups and to have their pre-game meetings. Time to grab some early lunch. I wandered to the very spot where that very night, in 1964, my St. Bonaventure girl friend Linda told me she was breaking up with me and going to go steady with her neighbor boy, Chuck Hagel.

Yes, that Chuck Hagel. No surprise, I lived 63 miles away at the time and old Chuck was next door and always did have that silver-tongued charm. Win some loose some, dude.

All the players had the pants part of their uniforms on now and were carrying their should pads with jerseys in hand. Coach Kreinke called me into the coaches office and introduced me to his staff. Impressive group. He then disappeared and in a few minutes the staff led me to the bus. Coach Krienke had positioned himself in the driver's seat of the Yellow Bird bus. One of the assistant coaches told me Coach always drove the bus, just wanted it that way. I was stunned at how relaxed this group of football players seemed to be. I didn' t know anyone of them without their jerseys on. As we motored to Lakeview, I could hear a young man talking about basketball situations....had to be Grant Lahm. I'm thinking he was the quarterback and I was sure he loved hoops. Still can't believe the mood was so light considering this huge rival game and the playoff implications involved. Someone led the team in prayers. 3 Hail Marys, and a "Mary Queen of Victory, pray for us." Maybe I was back in time. I recall my cousin Jim Micek telling they did that in the early 60's.

When we arrived I marvelled at the way Coach Krienke backed the bus into an exact spot. He just looked at me, smiled, and said, "farm kid, I'm used to it." Lakeview Athletic director Jake Shadley greets me. I was uneasy. I was just on their sidelines a week ago in Albion. Would he get the wrong idea about this deal? He asked me how I felt and how the experience was going. I was at ease and was thankful for the trust.

I watched as the players were being taped. Still didn't know anyone yet. Oh Lord, I wished I could turn the clock back and take someone's place on that bench....but that was 50 years ago.

There was not a fire and brimstone pep talk before the game like I witnessed at Omaha Central in 2010 prior to the Creighton Prep game. The players seemed to sense and know the task at hand. Coach Krienke came in and told the skill position players to hit the field...I followed. Now I knew who everyone was, the jersey's were on.

The game was a battle of wills and absolute defensive gem. Back and forth the lead went and the pads were popping so loud my bones rattled. Perfect football game. Scotus lost QB Grant Lahm early in the 4th quarter. The emergency unit puts #29 on a stretcher and takes him away. Coach Krienke calmly tells his players Lahm would be alright, just a precautionary measure to transport him to the hospital. Jared Duren takes over at QB and Scotus battles to the end. The 'Rocks would have the lead with 48 seconds left, but Lakeview finds a way to execute a perfect Hook and Ladder as speedy Mark Jarecki takes it to the 9 yard line. Scotus stiffens and holds. 5 seconds left, 1 play remaining. Split End Austin Urkoski lines it up and calmly boots a 24 yard field goal into the dark sky to give Lakeview a hard fought 17-16 win.

The Scotus players meet at the center of the field and Coach Krienke tells them they left it all on the field and to move on. They say 3 more Hail Marys and retreat to the locker room. The room is deathly still. Some players are teary eyed, some just bitterly disappointed. Heads were hanging, moods were somber. Half a dozen players approach me and ask if I enjoyed myself and was the gameday experience a cool one. I am impressed with the fact these young men could be concerned with my thoughts at a time like this. Very well trained in life are these Scotus players. An unbelievable gesture by 16, 17 and 18 years old kids who just had their hearts broken.

Coach Krienke once again takes the wheel and drives the silent yellow bus back to the school. Not even a whisper could be detected. As he parks the bus, Coach reminds the players one more time that they left it all on the field and to look forward and forget the loss. The playoffs are next. I sit in the front seat, hoping the players would leave first, it's the least I could do. With great courtesy, they insist I be the first off. The experience concludes with my praise to Coach Krienke and his staff for making this entire experience possible for me. As I make my way back to my car, I see sophomore fullback Jake Bos putting his gear in his vehicle. I want to say something but can see he is dejected. He played with great fire on this night. For a moment I thought I had seen a green jersey and gold helmet being placed in the back seat of a Candy Apple Red '57 Chevy. I took a few steps and turned back.....nothing there.

I had 63 miles to think about things. My journey to this town, this high school, was to experience something that was void in my youth. My wish was to be a Bonnie for one night........but there was no Bonnie, no school as I remember, no faces, not even a ghost whisper of the past. After all that was 50 years ago. I kept asking myself what I expected. How utterly sad would it be if everything would still look the same. How could something exist 50 years without changing, without progressing, without improving?

On this night, there were no Bonnies to be found. Those young men I watched were the desendents, the ones to carry on a tradition they have never seen, just heard about. These were the Scotus Shamrocks, not the St. Bonaventure Bonnies. These were the young men and a coaching staff that permitted me to experience a game day, an important game day. They took the time to permit an old guy, who is so in love with high school football, the opportunity to be a part of something he had never experienced. They let me follow my dream.

As I neared home, I realized that I was not a Bonnie for one day. I was part of a Scotus experience. Oh, Bonnies exist alright. There are hundreds of grads from the old St. Bonaventure high school but I never found them and I didn't find my youth, things change and time marches on...after all, that WAS 50 years ago.

It's all good now. I witnessed the transformation of all that is progress when I had this Scotus football experience. There was no Bonnie experience, history changed that. What I had was a modern day Columbus Scotus high school football game day experience. For that I am grateful.

After all these years, my soul is at ease after this magic night. I know now that it is alright to say

"Once a Bonnie, always a Bonnie." even if you've really never been there. These modern day Bonnies called Shamrocks told me so without saying a word.