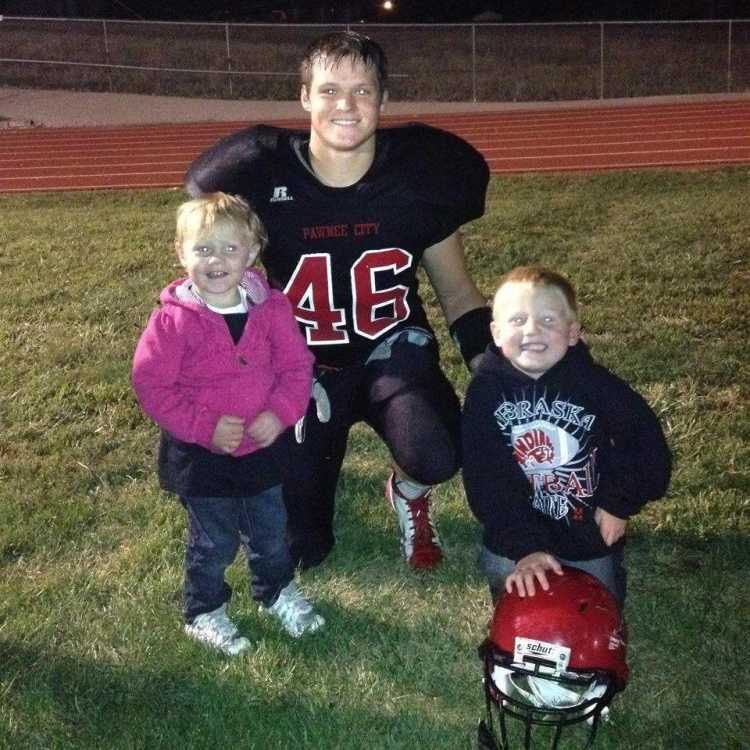 Pawnee City's Scott Borcher. Are these 2 of his offensive lineman?

As we turn the corner to the second half of the football season, the list of outstanding performances grows longer and longer. District pictures are just beginning to take shape and injuries are beginning to effect some squads. We wish all teams could be healthy when crunch time rolls around but that's not the game. Some are more fortunate than others and although I pray for everybody's good health, the stars just will not align perfectly for some high school football teams as far as injuries are concerned. Sad, but part of the game and life itself. Sometimes injuries give way to new Friday Night Heroes.

So now we shine the spotlight on the Stars of Week 5:

*Drew Klein-Papillion LV South - In just 3 quarters Thursday against Omaha Benson, the outstanding senior RB rushed for 373 yards on 30 carries and tied the Class A single game touchdown record by crossing the goal line 6 times. Klein scored on runs of 1, 72, 22, 42, 1 and 16 yards and broke open a close game that saw the Papio South only lead the Bunnies 27-20 at the half. On one second half drive, Klein had 85 yards before the final 19 were scored on a pass play. A penalty stretched the drive to 104 yards. Titans ended up beating Benson 55-20. Klein now has 1,204 yards for the season and has no game under 100 yards rushing.

*Ben Hinrichs-Giltner - Hornet's coach Jeff Ashby found out 13 was not an unlucky number when he switched Hinrichs (#13) to quarterback early this season. Hinrichs, who started the season as a wide receiver, completed 17 of 21 passes for 225 yards and 2 touchdowns against D-2's #5 Fullerton Friday. The 165 junior, who is listed as "Athlete" in the program, also ran for 147 yards on 21 carries and scored on runs of 13, 13 and 5 yards against the Warriors. Hinrichs said he still has to improve on his passing game......could have fooled me.

*Scott Borcher-Pawnee City - Borcher rambled for 284 yards on 30 carries and scored on a 40 yard run in a 39-8 loss to Freeman. Borcher has run for 848 yards on a WINLESS team and could become only the 2nd back in 39 years to accomplish that feat. (See photo above)

*Garrett Poppen-Giltner - Hinrichs teammate was just a beast on defense and added 106 yards on 21 carries + TD runs of 12 and 27 yards in that 54-16 Fullerton win. This young man is something special. Poppen has rushed for 642 this year.

*Garrett Sonderup-Fullerton - Had 146 yards on 16 carries in that Giltner loss and scored on a 56 yard TD jaunt the first time he touched the ball. On his way to a second 1000 yard season with 725 yards.

*Jake Paulsen-Cozad - Jake the Snake was turned loose for the first time since the season opener and responded with 242 yards on 26 touches in a 19-0 windy win against rival Gothenburg. Paulsen scored all three Haymaker touchdowns on runs of 85, 20 and 9 yards. The 85 yarder came with the score tied at zero in the second quarter. Paulsen now has rushed for 808 yards and has touched the ball only 74 times. You can do the math but I think this is pretty impressive.

*Calvin Strong-Omaha North - Led number 1 Vikings to a big 27-20 win over a fine Omaha Burke team. Strong rushed for 243 yards on 29 carries and scored twice on 1 yard runs. Strong, who has run for at least 200 yards in every game but one, is the state's leading rusher with 1,476 yards. This kid may just hit 2000 yards before the playoffs even begin.

*Lane Yates-Omaha Westside - 143 yards on 17 totes and a 72 TD scamper in the Warriors 47-0 pummeling of Millard South. QB Christian Hagen was a dead eye connecting on 16 of 24 aerials for 250 yards and 3 touchdowns. WR Jamal Conway-Smith caught 8 of Hagen's passes for 136 yards, one of which was a 39 yard TD. All in all Hagen accounted for 27 points with 3 TD passes, a field goal, and 6 extra point kicks.

*Buzz Neiderklien-Adams Central - The Buzzer was at it again. Neiderklein went off for 171 yards on 20 carries and scored 4 TDs in the Patriots 54-6 win over Central City. Buzz has run for over a 100 in every game for A/C and now has 933 yards for the year.

*Clay Fisher and Grant DeVries-Millard North - Fisher rambled for 143 yards on 30 carries and scored on 1 and 18 runs in the Mustang's 38-20 win against Papillion LV. DeVries was only a yard behind with 142 yds on 24 carries as Millard North piled up 367 rushing yards.

*Ethan Lunkwitz and Garett Schledewicz - Lunkwitz rushed 30 times for 160 yards and scored from 4, 10 and 31 yards out in the loss to Sutherland. Schledwicz added 130 yards on 17 totes and scored on runs of 7 and 1 yard. Those teams out West can really light up the scoreboard can't they?

Hayden Geis rushed for 90 yards on 15 tries and scored on a 48 TD run to complete the 307 rushing total for EC. The 34-18 win was the Buffaloes 2nd straight win over an undefeated squad. So....why doesn't Elm Creek wear Colorado helmets? Think about that one.

Isaac Wallace-Ralston - Wallace is starting to roll like a finely tuned racing machine. The smooth, shifty senior ran for 207 yards on 40 carries and scored 4 times in the Rams thrilling 27-21 overtime win against Beatrice. Wallace is now a 3 time 1000 yard rusher, having run for 1,040 yards this fall. What a player and what and fine young man.

**Jacob Morrill-Creighton** - Morrill is 115 yards away from making history. In a shocking 80-0 win over a nice Bloomfield team, the three time 1000 yarder rushed for 170 yards on 16 carries and scored 3 Tds. Jacob can become only the 3rd back in Nebraska high school football history to have 4 thousand yard seasons if he gets those 115 big ones. Morrill has had only 70 touches this season but has averaged 12.64 a carry. We'll keep you posted.

* Logan Powers and Leighton Chicoine - Lincoln Christian Dynamic duo had it going in a 41-22 win over tough Wilber-Clatonia. Powers completed 19 of 26 passes for 388 yards. Chicoine caught 14 of those for 228 yards and hit pay dirt with receptions of 20, 75 and 3 yards. Powers also had a 54 yard TD run. Christian is a dangerous team even if they have gone up to C-1. Tremendous athletes on this squad that can kill you on the ground or through the air.

*Ben Kuehn-Howells-Dodge - Junior rushed for 170 yards on 19 tries and scored 5 touchdowns in the Jags 48-14 win at Omaha Christian Academy.

*Jack Shadley and Austin Urkowski - All-State QB Shadley completed 11-17 passes for 248 yards and 5 Tds in Lakeview's 53-14 win at Madison. Urkowski caught 4 passes that all went for touchdowns. Urkowski TD receptions were 80, 25, 42 and 19 yard TDs on his way to 166 yards receiving.

*Jordan Slough-Doniphan-Trumbull - The incredible back had only 8 carries in a 68-7 win over winless Superior but rushed for 245 yards and scored 4 Tds. That's 30.6 yards a pop friends. Slough has run for 912 yards on limited carries this season but without a doubt crank it up this Friday when D-T faces Sutton. I'm getting a front row sidelines seat for that baby!!!

*Tyler Brown and Jordan Heinrichs-Henderson Heartland - Brown ran for 191 yds on 23 carries, scoring TDs on runs of 5, 38, 1 and 54 yards in Heartland's 62-36 romp over Franklin. QB Heinrichs rushed for 110-22 and scored on TD runs of 7, 28 and 25 yards in the win. Brown, a junior has rushed for 935 yards on only 73 carries this fall (12.81/carry). This team is still young and could be headed for the best squad since the Kroeker/ Buller Henderson days. I knew these boys would be good when I saw them as freshman. Like this team.

*Hunter Poteet-Crete - Ran for a game high 147 yards in the Cardinals 29-7 upset of Aurora.

*Isaiah McChesney-Kenesaw - Everybody else is hurt so McChesney decided to run for 181 yards on 20 carries and score 3 Tds in a 76-33 win over Wilcox-Hildreth. Where does Kenesaw keep coming up with these backs?

*Keithen Drury-Blue Hill - Slick junior RB with the X-Ray eyes rushed for 151 yards on 24 carries in Blue Hill's 38-6 win over Ravenna. Drury had TD runs of 8, 9 and 14 yards and has 643 rushing yards for the season. This kid knows how to follow his blockers then explode.

*Wyatt Mazour-Boone Central/NG - Ran for 101 yards on 12 carries and scored on a 15 yard run as the Cardinals whipped David City on their new artificial turf field. And you thought that was all?

*Jesse Windham-David City - Windham wasn't about to go down without a fight in the Boone Central game. Jesse ran 13 times for 119 yards and scored 2 Tds. Windham bolted 72 yards for one TD and set 'em in the aisles with a 93 yard kick return.