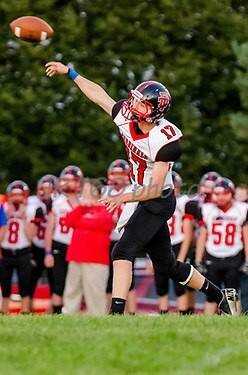 In a battle of early season unbeatens, Doniphan-Trumbull overcame a boatload of penalties and cashed in on some costly Blue Hill offensive mistakes to take 34-12 win on the Cardinal's home field.

Doniphan-Trumbull cashed in on a Jordan Slough interception and a Jake Critel fumble recovery and converted both into first quarter touchdowns. Only a minute 12 into the second quarter, speedy Lorenzo Williams picked off a Jason Poe pitch and returned it 40 yards for another Cardinal score. Although the Bobcats never quit fighting, they were unable to recover from the 3 early miscues and also were forced to play most of the final three quarters without their leading rusher, Keithen Drury. Drury went out with an MCL injury and did not return.

All-State RB Jordan Slough rushed for 179 yards on 24 carries and scored twice, the first coming on a 53 yard pass reception and the second on a brilliant 58 yard run. Keithen Drury rushed for 114 yards on only 11 carries in just over a quarter and a half for Blue Hill.

A full story will appear later.