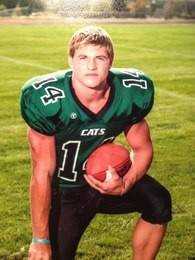 Dictionary.com lists the definition of a Renaissance man as: a present day man who has acquired profound knowledge or proficiency in more than one field.

Urban Dictionary simply defines it this way: Someone who does a little bit of everything, yet does it extremely well.

No matter which definition you choose to go with, Millard West's 6-1, 195 pound senior Ross Drwal fits the description perfectly. In this day of athletes specializing in one sport and one position in that sport, you rarely find a "Renaissance Man" in any high school sport, let alone football. Even more rare is finding one of these individuals competing in Nebraska's largest class. Millard West's #14 is a man that is difficult for opposing teams to keep track of on the football field. What is more amazing and sometimes baffling is the fact that Ross Drwal seems to be flying under the radar in some circles. I can guarantee with certainty that when the curtain comes down on the 2013 high school football season, his name will be etched in the minds of those who know the game well.

Suffice it to say, I probably have seen more football games on the high school level than many folks and watched as much film as many high school coaches and college scouts. Averaging in the neighborhood of 25 games a year for the past 45 seasons, certain players just jump out, grab you and leave a permanent imprint in you mind. Enter one Ross Drwal. I saw him play 2 years ago against Millard North. The speedy sophomore slipped downfield from his wide receiver position, blew past the defense and caught a 67 yard touchdown pass. Right then and there, it was apparent this young man could play the game.

Many game films and another live game later, I was convinced the well cut, handsome lad from Millard West was something I hadn't seen in a long while....something very special, someone who only comes along once in a great while.

Ross Drwal comes from a family with athletic bloodlines. Both parents were fine high school athletes and Drwal's father was a track scholarship athlete at UNL, throwing the javelin. Brother Jake was an all-state receiver at Millard West and later played at Lehigh. He even had a tryout with the Green Bay Packers a year ago.

It was during that sophomore season in 2011 that Ross Drwal defined his football image. In 10 games, Drwal played quarterback, running back, and all the receiver positions for the Wildcats. Coach Kirk Peterson had the luxury of a 1,600 yard passing QB that season which enabled him to move the speedy Drwal all over the field. #14 dazzled almost every team the 'Cats faced, burning them from multiple positions on the football field. Millard West eventually lost a heartbreaking 23-17 first round playoff game to rival Millard South and finished 6-4.

A year ago, Drwal took the reins at quarterback and led the Wildcats to a 7-4 record after a rough start. Millard West went 1-3 against teams with teams that eventually finished with a combined regular season record of 30-6. But the Wildcats, led by Drwal, rallied to make the playoffs. The Wildcats won a first round game, then once again lost to Millard South 17-14 before finishing the season 7-4. Ross Drwal continued to shine, rushing for 528 yards (8Tds) and passing for 848 yards and 5 scores. But it's the things that do not appear on any stat sheet that make this kid worth his weight in gridiron gold. College scouts began to take notice.

Like the definition of Renaissance man states, Ross Drwal is a man of many talents. His listed 40 time of 4.52 is as deceiving as it gets. Drwal gets from zero to 60 if you will, in the blink of an eye. The blazing start makes his 40 time seem more like 4.30 and it gets there in a heartbeat. #14 hits full steam instantly and can execute any of his fluid moves at that "full throttle" gear. Possessing the vision of an accomplished Olympic downhill skier, Drwal glides through defenses, reading and following his blockers with pinpoint precision. It doesn't take long Drwal to burst to the corner and there may not even be a handful of safeties and Class "A" DB's that can catch this guy once he gains a step on them. I've always said my favorite kind of breakaway back runs like an outstanding 400 meter track star. Ross Drwal runs like that. Just like former Oklahoma coach Barry Switzer used to say about fluid running backs..."like smoke through a keyhole, baby".....that is Millard West's #14.

With the 2013 season only a week away, Millard West enters the pre-season ranked as high as #2 in pre-season ratings (World-Herald). In a crowded pre-season all-state squad with so many great individual players, Ross Drwal's name is shockingly absent for the most part and maybe he wants it this way. Millard West returns most of it's skill people and about half of it's starters from last year's team. Outstanding players like lineman Harrison Phillips (D-1 Stanford recruit) and wide receiver Skyler Monaghan are names rolling off the tongues of college scouts and sports scribes everywhere. This just might be the year a well deserving Kurt Peterson and his Millard West lads grab themselves a state championship. At the center of the Wildcat football team and the player providing the heartbeat is a young man named Ross Drwal. He's the man every Millard West opponent has heard of, yet he is a man that some seem forget about. That can be dangerous....very dangerous. He is the man that has respectable stats, yet his name is never at the top of the list. It may never be, but one-man teams rarely win championships in team sports.

Maybe Ross Drwal has a point to prove in his own mind. In my mind, the point has already been made with an exclamation point two years back. But there is unfinished business for this young man. The Class A football field is loaded with a heap of fine individual talent, but no team seems to have a clear cut path to the state title. Enter one Millard West player that wears #14. The man with controls in his hands and a plethora of Millard West talent surrounding him.

It is entirely possible you will not see Ross Drwal's name at the top of any statistical column at season's end. On the other hand, it may be appear near or at the top of many categories. But that's not the reason he is there. #14 wants to lead his team to a state championship, and he just might get the job done.

After all, Ross Drwal is a Renaissance Man.