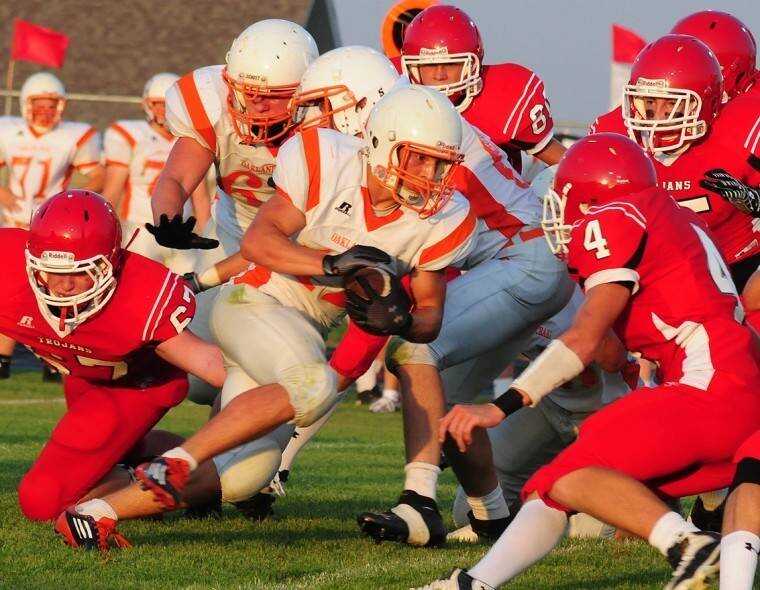 Here is installment number two of players you should not miss this fall. Class A is especially loaded with marquee performers and they are located in a 60 mile radius (Omaha/Lincoln) for the most part. You will regret it for many moons to come if you don't hop in the ride and catch a Thursday or Friday night high school football game this year. So many outstanding young men to watch on the gridiron in 2013.

On with it then, my good football friends:

Easton Stick (6-2, 205 QB) (#14) & R.J. Urzendowski (6-0, 185 WR) (#15) - Creighton Prep- Mother of Mercy is there a better passing tandem in the state than these two? Easton Stick connected on 125 of 215 tosses a year ago for 2,062 yards and 17 touchdowns while suffering only 4 interceptions. The lanky senior isn't afraid to run out of the pocket either, rushing for 487 yards and 14 more Tds. When #14 hooks up with #15 on a pass pattern it's a pretty sight to see. R.J. Urzendowski ran under 63 of Mr. Stick's aeriels for a Class A best 1,093 yds and 14 scores. This lad reminds me of a Seattle Seahawk wideout from way back by the name of Steve Largent (late 70's/early 80's). Urzendowski has the ability plus speed to get open, and also possesses a set of hands any QB would kill for. If you throw it anywhere near R. J., it's money. Urzendowski is also one of the most feared kick and punt returners in the Metro, having compiled 726 return yds and 2 touchdowns in 2012. These two lads are a must see and will lead the Junior Jays to a fine season this fall.

Ross Drwal (6-1, 195) (#14) - Millard West - Ok, I'm a little bias when it comes to Drwal. All-American boy with a million dollar smile and a personality to match....and we haven't talked about football yet! As a sophomore, Kirk Peterson put this kid at almost every imaginable position on the field you could dream of and Drwal loved every minute of it. His opponents did not. Difference then was that Millard West had a great QB in Marcus Ethen so Drwal could sparkle at multiple positions. Last year, Ross was the full time signal caller, and could not play as many spots, but still was outstanding. I truly believe Ross Drwal could be an super state football player at QB, RB, WR, or return man...he is simply that good. He has already received D-1 offers from Illinois St., Lehigh, North Dakota, Pennsylvania, S. Dakota, and N. Dakota St. Nebraska is making a mistake if they don't to take a serious look at this young man. Drwal has a stride similar to Taylor Martinez, covering a lot of ground in a hurry. Maybe the best duel-threat QB around, Drwal will also be called on to play some big time defense this year so he will be a busy man.

The Wildcats are going to be serious players in the "A" picture this fall and Drwal will make them go.

Caden Weverka (5-11, 190) (#16) - Arapahoe - Could very well be the finest 8-Man quarterback in the entire state. Led his team to one step away from Lincoln before the Warriors finally lost to eventual D-1 champ Elgin/Pope John. Weverka lines up in the shotgun and can burn you by taking off on the run or by firing an accurate bullet to an open receiver. In 2012, Weverka ran for 1,334 yards (6 yds/carry) and passed for another 792 yds and 13 scores. When this kid gets rolling, he sheds tacklers like a duck does water. Great stiff arm that can flatten would-be tacklers all by itself. At 190 pounds, there aren't too many DBs that can match up with Weverka when he hits the full throttle button. Arapahoe still has some nice skill players returning , so #16 will have help and that's not good news for opponents. By the way, Weverka had 4 INT's on defense and broke up several passes....wouldn't you know it.

Nick Arlt (5-9, 148) (#12) - Oakland Craig-Jr. - Alright, here's the deal on this kid. Have not had all that many opportunities to see him, even on film, but when you gain 1,750 yards rushing as the featured back on a team that won 6 games plus a playoff game, you must be pretty salty. Add the fact that Arlt is 5-9 and 148 pounds....now that's special. So, how does a guy that is that light compete in 11-man football and gain that many yards? Great line? Faster than a speeding bullet? Well, my question was answered at the end of the winter sports season a year ago when Arlt won the Class C 145 pound weight class state wrestling championship. Tough dude who, pound for pound is about as solid as you get. Yes, he did have a fine line and can scoot to the corner in a heck of a hurry and flat out pick 'em up and lay 'em down in open spaces. Arlt gained 436 yards as a freshman for Oakland-Craig and last year came within reasonable striking distance of O-C's single season rushing record set of 1,885 yards by rugged Chad Baker back in 1995. I saw Baker play and he was one tough hombre, trust me. So Arlt already has the school record for touchdowns in a single game (5 vs. Southern in the playoff win a year ago), so one has to wonder what is in store this fall? Oh, one other thing Arlt and Oakland-Craig have going for them is head FB man Joe Anderson. Downright fine football man, believe me. Go see Arlt and Oakland-Craig play.

Lane Yates - (5-8, 180) (#13) - Omaha Westside - Coming into last season, I wonder if Lane Yates had any idea he would carry the ball 20 times a game and gain 1,549 yards? Yates says no way, yet players around him assured him that it was "his time" and boy did "lucky #13" ever make that prediction a reality. Yates lined up deep in that Westside "I" formation and exploded through most opponent's D-line in before they could blink an eye. It only takes a second for those offensive lineman to hold their blocks because Lane Yates hits a hole as quick as any back in "A". The Warriors scored in bunches a year ago, averaging 37 points a game through the regular season before being "upset" by Omaha Burke in the first round of the playoffs. Yates was a big part of that scoring explosion, having the ability not only to hit the line quickly, but to shed tacklers and glide through defenders with keen vision. Biggest key to Yates success last year was the fact he hit the hole, then bounced to the outside instead of just bouncing to the outside from the start. Something tells me Yates probably won't have to change anything this year.

..........and a finally, couple of players that pretty much ran under the radar to most observers except for those who follow the game closely.

Hayden Johnson - Norfolk (5-10, 175) (#45) - This guy runs like a powerful 220 pound fullback, but has the speed of a running back. Johnson lines up right next to splendid QB Taylor Reedy in the Panther backfield and takes the ball and runs between the tackles most of the time.....to the tune of 929 yards on 173 carries. Don't count on that play every time for Johnson either because #45 can get to the outside in a flash and get downfield in a hurry. Johnson also is an excellent pass receiver out of the backfield, nabbing 29 passes for 327 yards. Ask any coach who played the Panthers in 2012, Johnson could play for them any Friday night of the season. This kid is a very very good football player. Also a nice middle linebacker who loves to hit.

Yohanna Shokai - Lincoln High - (6-0, 175) (#20) - I'll put it to you this way, put Shokai behind Millard North's line and he gains 2,000 yards. Man, this dude dances, baby. Ain't no way you are going watch Yohanna Shokai run behind some decent blocking and not be impressed. There are not too many backs in "A" who have better lightening quick plant-and-go moves than Shokai. Not being mean, but Lincoln High has gone through some rough football times for quite a while and hasn't had a 1000 yard runner since the magnificent Shawn Smith did it twice (1988-89). In fact, only 2 other have turned that trick in the Links history. Cordell Sims in 1984 and the incomparable Bobby Williams who set the school record of 1,395 yards in 1960. Williams later played for the Detroit Lions don't cha' know.

Anyway, with any blocking at all, Yohanna Shokai could gain a thousand yards. Easier said than done at Lincoln High, but this guy is worth the price of admission just to see do same serious dancin'. Sweet runner.