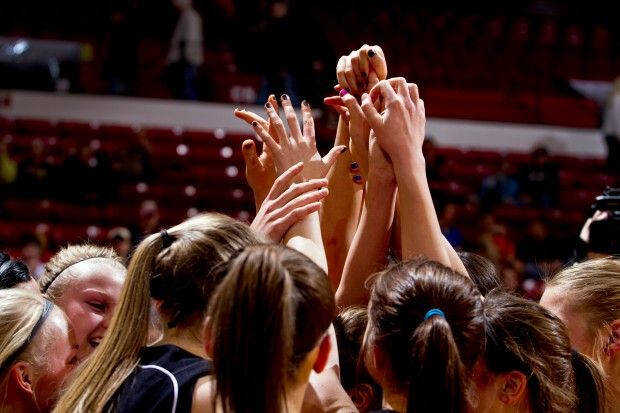 The Hands of Trust are thrust high in the air after Northwest bring down 4 time Class B Champion Seward. *(photo courtesy of Journal-Star)

I never see every home game any high school team plays. Not in football, not in any sport. But this winter I somehow convinced some folks at Northwest high school to give me the best seat in Rosencrants gym which enabled me to watch the Northwest Lady Vikings basketball team. I knew in my heart something special was going to take place. Right coach, right athletes, right work ethic, NO "I" In Team" attitude. Now, for the remainder of my living days, memories of a group of young ladies that never wavered and a coach that knew how to push their buttons, will forever be embedded.

Tonight the Northwest Lady Vikings overcame a 14 point defecit, never wavered or panicked, and beat Norris to seize the first Lady Viking State Basketball title since 1982. The game tonight may have decided the Championship in Class B girls basketball, but the groundwork was in place long before this bunch took the floor at the Sports Center in Lincoln on this day. In fact, it may have begun to take shape after the Vikings dropped a 51-34 thumping to Beatrice in the first round of the state tournament a year ago.

First of all, Mike Herzberg is a special coach. How in the world he ended up at Northwest, I'll never fathom. Some people just don't realize what they have, I guess. Personally, I believe he was the man in the shadows a year ago, patiently awaiting his chance to take the reins. His offense was already in place when basketball practice started last November, just a short time after this group of girls nailed down a State Volleyball Championship. They hit the hardwood running and never let up. Volleyball shape isn't basketball shape, but that can be remedied, and was......a winning mindset cannot be taught overnight, but a state title in Volleyball can help that along......thank you Diane Rouzee......and Mr. Herzberg.

The framework was in place a year ago, but there were a few puzzle pieces missing. A couple of transfers helped remedy that, but the fact remains that Mike Herzberg took over the ship and laid the groundwork that culminated in the Big Prize tonight. Kinzie Brown is the cog that makes this team go, but Herzberg was wise enough to cast her in a role that made this team nearly impossible to stop. Remember, rarely does a high school basketball team go undefeated when they win a state championship. There will be bumps along the way, but you build your chances as the season rolls along to assure that if one final critical stumble happens to hit you right smack dab in the chops in the District final, you have enough wild card points to get to Lincoln. Sure enough.

There were times this season when I wondered if this group was becoming bored, going through the motions. Many times things were just too easy. When you're a kid, you fantasize about playing for a team that creams everybody by 50 points. What a kick, man. Beat 'em down baby. Take no prisoners. Hold on. I've talked to small town hoops players from the Western part of the state who played for teams that scored points on their opponents like they were playing a grade school squad week in and week out. They told me in the end they were bored. Most of their teams lost when the going got tough in districts or at State for sure....things were too easy. They had coaches who failed to put the successes into perspective. There was an 11 day span in January where I feared things were coming too easy for the Lady Vikes. Winning margins of 32, 45, 67, and 48. Could be poison in the long run. The fun before the big crash.

On January 24th the season could have come crashing down after a 71-63 overtime loss to a Crete team that is far better than you would imagine. Herzberg and his girls bounced back though, but there were still two more hurdles to clear.

Nobody wants to play a team a third time when you already own two wins against them. The Lady Vikings were well on their way to besting Holdrege a third time in the District final when Kennadi Keezor went down with a season ending ACL injury before halftime. The Dusters turned Rachel Jelden loose in Keezor's absence and Holdrege shocked Northwest while securing a state tournament berth. But the Vikings had built enough wild card points to punch a ticket to Lincoln when all the fog had cleared. They had to play without Keezor though and somewhere along the way, this group of determined girls and Mr. Herzberg had to bring down a team that won the last Four Class B crowns.

The rest is history.....sweet history. I knew all along that if Mike Herzberg's girls had a shot at Seward, they would bring them down. Loved the match-up. March 2, 2013 is a long time in the rear view mirror from December 8, 2012 when Seward beat up on this team 56-41. These gals were just getting started then. They needed one more shot at the mighty Bluejays. In this guy's mind was, "beat Seward and you bring home the Class B title". They accomplished that last evening in rosounding fashion.

It wasn't that easy though, but there was no magic to tonight's memorable win over Norris. Mike Herzberg was cool when he spoke on NET before halftime. Down by 10, he simply stated that his girls had done it before. No magic, just what they had spent the entire year building. Trust in each other and good things will happen. Just do what you practiced all year. They knew the drill. It may have taken two overtimes, but the Northwest Lady Vikings finished the job with Kinzie Brown on the bench. The same faces came through when it counted. The same coach who started this novel in November signed his name on the 2013 Class B State High School Basketball Championship trophy in a sense.

In a post game interview, the humble Mike Herzberg gave all the credit to his girls. The Captain of the ship which had just sailed into Dreamland played down his presence. "I am just blessed to have been a part of this" he stated. We all know better. Just ask Kinzie Brown or Kaley Werner, or Katy Placke, Erin Sorahan, or Kennadi Keezor. Or ask players like Morgan Westfall, Hannah Rathke, Erin Schleicher, or Shelby Schacher who all had to come through in crunch time. Ask the girls who never played in the crunch, but put in the long hours of practice like Rachel Phinney, Laura Springer, Alyssia Fisher, Allison Beckman, Aubrey Fisher or all the JV players. They all know.

Now they can relax and enjoy the sweet success for a while. This group of girls will long be remembered as the team who never wavered in the face of adversity. They trusted each other. The team who had a special head coach that guided them every step of the way to the land of Champions. A lifetime memory.

But this may not be the end of this success story. With many faces returning for another go around, we just may be venturing down this road again a year from today. And with Mike Herzberg at the helm....anything is possible.

....Sleep tight tonight Northwest Lady Vikings, you Are The Champions!