Ryan Tegtmeier - The Man of the House 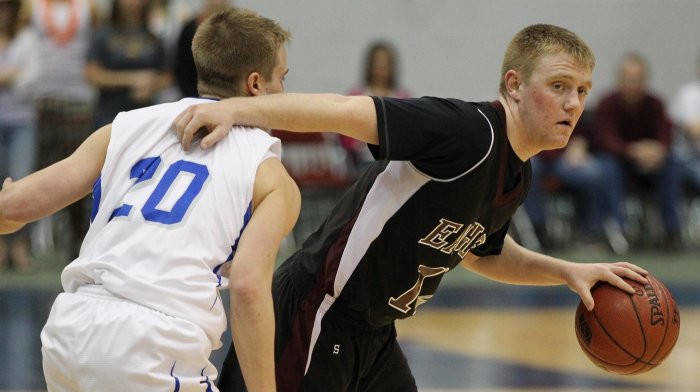 Ryan Tegtmeier of Bruning-Davenport-Shickley has outscored entire basketball teams by himself. He scored 41 points in a game as a sophomore two years ago in an era when Nebraska high school boys basketball teams are specializing in defense. He has scored every single one of his teams points in a half. There is not a team in the state who would dare to say "let him have his way and just see if he can single handedly beat us." This same Wizard of the Hardwoods took his BDS football team to Howells-Dodge last Fall and quarterbacked them to a win over the mightiest of all the mightiest. Nobody had even fantasized about beating the team who won had won NINE 8-Man football titles since 2000. Ryan Tegtmeier told me he had a little magic left before that game.

And now, Tegtmeier and his BDS hoops teammates finally reached a crowning achievement they have been chasing since his sophomore season.......win the Crossroads Conference tournament twice in three seasons. Last Friday at the venerable York City Auditorium, BDS held off a late charge to best defending D-2 champion Giltner for the Championship of a conference that has been around for 61 years. And Ryan Tegtmeier was a shining star in this game...this Crossroads Tournament....but this isn't the first time.

Two years ago I took in a Hampton basketball game and a couple of locals approached me after the game and were raving about a young sophomore from BDS who could do it all. Oh no, not just score points, but see the court, distribute the ball, dribble like a Globetrotter, and glide through the air with the ball rolling off his fingertips with soft, accurate precision. This kid could play defense, take over a game, and played well beyond his years, they said.

"Do yourself a favor 1000 Yard Guy, and get to a BDS game as soon as you can and prepare to floored."

In that winter of 2010, I caught the Thursday and Friday BDS Crossroads tournament games at the York City Auditorium and in a span 48 hours I witnessed a fearless sophomore court wizard helping his team knock of the number one and two teams in Class D-2. Hampton and Giltner went down to defeat and Tegtmeier was unstoppable on offense. When he wasn't scoring three fourths of his teams point one night, he was dishing out assists and leaving defenses wonder where the ball had gone. On those unforgettable nights in 2010, Ryan Tegtmeier may have snuck up on the Crossroads kingpins, but as the curtain drew closed last Friday in York not much had changed since then. Tegtmeier was a marked man this time but came through like a masterful court genius with all eyes on number 12. Tegtmeier scored half of his team's 28 points in the first half then set a Crossroad tournament record by sinking 16-17 free throws, 7 of 8 down the stretch, to lead the Storm to a 47-40 win over Giltner and nail the Championship trophy. He finished the game with 28 points and a whole lot more. Much more.

The Hornets knew what was coming but couldn't find a way to stop the player who made a living dazzling crowds at the City Auditorium.

I can't tell you the exact number of times I have seen Ryan Tegtmeier play basketball, but there wasn't a single time that didn't leave me in a tizzy. His ball handling skills are amazing, court vision is uncanny, but most of all he may be one of the smartest high school basketball players I have ever seen. Nothing phases Tegtmeier the court general....double teams, back court traps, 6'-8" post players, hand checks, and flat out hard banging. If he doesn't kill with with his dribble drives, pull up jumpers, lay-ups, or stop and pop beyond the arc treys, he will dish it off to an open player that nobody in the entire arena had spotted.

Ryan Tegtmeier gained a 1001 yards rushing his junior football season, but last football campaign he became one of the most intelligent 8-Man quarterbacks to play the game in a years. His check-offs at the line of scrimmage reminded you of a well seasoned college QB. To watch him on the gridiron was a thing of beauty. No flashy speed, no dazzling runs, just TD passes, first down runs on 4th down, or a field goal when it mattered most. A run out of bounds when the clock management was crucial. Ask Howells-Dodge. This team shouldn't have a shot against that "man-child" group of players from the land of football giants. But BDS had Ryan Tegtmeier.

Ryan Tegtmeier of Bruning/Davenport/Shickley capped off a three run of greatness at the York City Auditorium in the Crossroads Tournament. I saw all three years. It seems nobody dominated that majestic old facility more in 61 seasons of Crossroads basketball than Tegtmeier. To begin and describe what he accomplished would be too lengthy. Just ask BDS opponents. You might say he "owned" the City Auditorium in a sense of speaking, kind of like it was "his house" as they say in the NBA or the NFL.

"Ryan Tegtmeier - Man of the House"