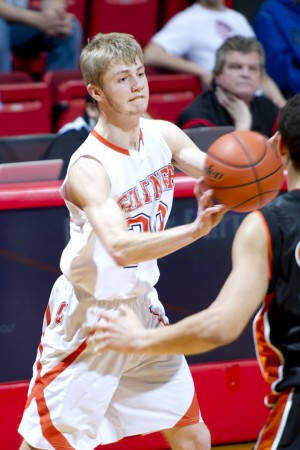 Giltner quarterback Jake Findley competed a season of passing perfection and in the process led his Hornets to a 42-26 win over unbeaten Humphrey St. Francis in the Class D-2 State Championship at Memorial Stadium. On a sun splashed morning blessed by the football gods, Findley completed 35 of 52 passes for 5 touchdowns and finished the entire 2012 season without a single interception. Not one. The outstanding senior sharpshooter attempted 364 passes in 2012, completing 264 of those without a single interception. Never in all my days have I witnessed a feat like this in any level of football. Giltner also finished it's season on a perfect note, never really being challanged from start to finished when all was said and done.

The Hornets jumped to a 30-8 halftime lead and never looked back in this one. St. Francis did close to within 14-8 with 8:11 in the second stanza, but Giltner scored on their next two possessions for the halftime cushion.

St. Francis still had a shot when they outscored Giltner 12-6 in the third quarter to pull within 36-20. But the quick strike Giltner offense slowed the tempo and the defecit was too much too overcome for a Flyer offense that was not built to be a rally-type unit. The Hornets tacked on two more 4th quarter scores to ice their first state title since 1984 when Jake Findley's dad, Randy quarterbacked his version of the Hornets to a win over "Air" Kelly and the Greeley Bulldogs.

Dustin Hastings and Ben Hinrichs each grabbed two TD passes for Giltner, while Jake Findley finished the 2012 season with 3,904 passing yards and and 66 touchdowns. The 66 passing Tds break former Giltner QB, Nate Most's state record of 52 in a single season.

Both Chad Haiar and JJ Oltmer of St. Francis rushed for 93 yards in the game. OItmer, just a sophomore, finished the season with 1,592 yards.