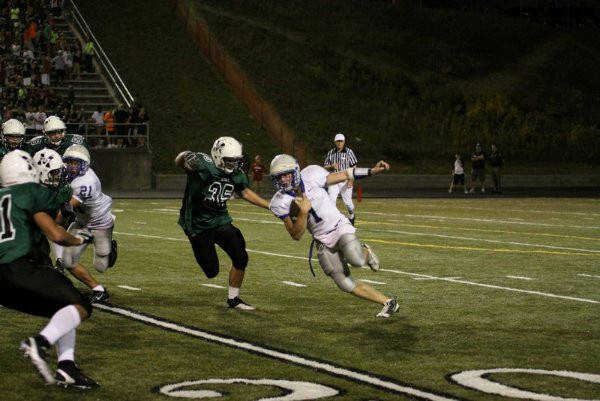 Millard North's Isaac Aakre sweeps in for a score against Millard West.

To put it simply....what a match-up. You really don't have to sit down and wonder what the outcome would be if these two teams went head to head. They did just that on October 19th, the final game of the regular season. Millard North's Andy Bayne coaxed a 32 yard field goal through the uprights with 5 minutes left to give the Mustangs a hard fought 37-31 win over the never-say-die Vikings. It wasn't easy by any means, and Millard North had to come up with two interceptions in those final five minutes to seal that win. Isaac Aakre took matters into his own hands that night, rushing an eye popping 43 times for 262 yards and three touchdowns. Omaha North's sophomore sensation, Calvin Strong ran 11 times for 116 yards, but one of those rushes was a 61 yard touchdown less than 2 minutes into the game. Strong also scored in the 4th quarter on a 17 yard run. His other 9 carries netted 39 yards.

Viking QB Zach Martin was 11 of 26 passing for 187 yards in that game with one touchdown and 2 interceptions. Omaha North had the lead twice in the first half, but could never go up by more than a touchdown. Millard North racked up a gigantic 414 yards rushing in the win.

I do remember a controversial call in that football game that did not sit well with Omaha North coach Larry Martin. In the midst of a Viking come from behind effort, an Omaha North defender sacked Isaac Aakre on 3rd down play that would have forced a long punting situation. But the Vikings were flagged for a horse collar tackle and the play became a 3rd and a few instead of an absolute long punting situation. I'm sure Coach Martin viewed that play as a momentum changing situation in that game and was livid at the time, but if you know Larry Martin well enough though, he would probably tell you his team still had chances after that. So......you can see what kind of a game is in store for fans in this Class A title clash Monday night. The fireworks fuses are in place.

So, what adjustments will be made by either team for this game? I'd bet my life savings Freddy Petito will make no changes on offense for Millard North.....he never does. "Here is what we run, try to stop it" has been the theme of this offensive machine forever. One thing you can take to the bank though, Omaha North will have to have a prolific passing game to win this 2nd match-up. Calvin Strong is a sophomore, but will not wilt under the pressure of a state title game. Also keep in mind that Viking Donte Hill blasted right through the heart of the MN defense for a 56 yard score in that previous meeting, but despite both of those points, Omaha North simply can't win this one with their running game alone. The passing combination of Zach Martin to Conner Phillips will have to shine on Monday night for Omaha North to have a shot here.

This should be a terrific football game and Millard North is no stranger to this stage. They have played for all the marbles 7 times in the past 12 years. What about Omaha North? The Vikings reached the semis in 2008 before losing to Millard West 29-19, but has never played for a state title in football. So whether you're at the game or in your living room, fasten your seat belts for this baby. Myself, I'm going to be right down on that heavenly Husker football turf for an up close shot of this classic. Is is time yet?