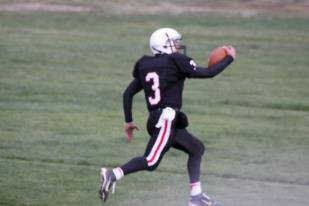 Aquinas is the defending state champion and wears the favorite role again this season. Coach Ron Mimick's Monarchs have swept through another season employing the services of many, many players to subdue opponents, often before halftime. Most games at least 9 to 10 backs touch the ball for Mimick's squad, and the defense is second to none. Bergan is a team that has improved with each game and has one of the finest backs, pound for pound, in the state in Josh Weidel. Both schools have a lengthy history of playoff appearances. The last time Aquinas failed to make the playoffs was in 2000 and the Monarchs have won Class C-1 titles in 1980, '94, '94, and 1997 in addition to their C-2 title a season ago. They were also C-1 runner-ups in '81 and '92. Not a bad playoff record for 20 appearances. Bergan has qualified the past 11 seasons and won a C-1 title back in 1979.

These two teams met back on September 8th in Fremont with Aquinas winning 19-7. Last year Aquinas blasted the Knights 63-7 in the 1st round of the playoffs but Bergan was 3-5 at the time and this year is an entirely different story with the addition of the splendid Weidel.

Josh Weidel is quite an interesting story for this Bergan squad. Weidel moved to Fremont in late grade school and even attended middle school at Bergan. But he transferred to Elkhorn Mt. Michael without ever moving out of his house in Fremont. After 3 years at Mt. Michael, Weidel decided to spend his senior year at Fremont Bergan and to say things have worked out well might be an understatement. What's more hard to grasp is the fact a year ago while playing at Mt. Michael, Weidel suffered two fractures in his back, which required him to be in a back brace for three months. The medical folks told him the injury would probably never heal completely, yet he could still play football....probably with pain.

Number 25 must not be feeling too much discomfort because he has rushed for 1,582 yards in 10 games for the Knights....not bad for a back that is listed at 5-7 and 150 pounds. Weidel is one of the best backs I've seen this season when he gets open spaces it is downright frightening.

Aquinas coach Ron Mimick does not believe in stats, so I'm alright with that. It does however, make it rather impossible to write a game article on the team, but that's another deal. Stats do not matter when you have a team like Aquinas fields year in and year out. This Monarch team is the odds on favorite to add another championship trophy to the case this fall, but Fremont Bergan would like to have a say in that matter. We'll see. Mimick is one of the best coaches in the biz.

Cinderella is still alive and dancing in the form of the Ponca Indians, but I'm thinking Lutheran High NE doesn't view those Indians as a Cinderella. Less than a month earlier Ponca gave the Eagles all they could handle in a 28-26 loss on October 12th. Ponca's other 3 losses came at the hands of playoff qualifiers Battle Creek (33-32/double OT), Wakefield (20-14) and Crofton (38-12). Ponca is no stranger to the playoffs either, qualifying 8 of the last 10 years The Indians won it all 4 years ago in C--2 when they beat Hartington CC in a 14-13 overtime thriller. Lutheran High Northeast has only been existence since 1997, yet has qualified for the C-2 playoffs four times, including the past two seasons. The Eagles made it through the most brutal C-2 district in the state unscathed and even beat a tough as nails Fremont Bergan to open the 2012 season.

Ponca's double-wing formation has caused major headaches for opponents all season long. The Indians can hit you with a very quick, balanced attack that features two backs over 600 yards and two over 400. QB Aaron Carlson leads the rushing charge. Wes Borson, Tanner Boyle, Michael Walsh, and Sam Burki have also contributed in that department. Carlson rushed for 117 yards in the opening playoff win over Elmwood-Murdock, then followed up with 161 last Wednesday in the 38-29 second round win over Harington Cedar Catholic.

Lutheran High NE of Norfolk has been paced on offense by two key players, Arrin Rathke and Shaka Taylor. Rathke has run for 1,180 yards and the speedy, shifty Taylor has over a 1000 yards in total offense. An offensive line that averages 250 pounds per man has paved the way for Rathke and Taylor. Remember, this was the team that gave Aquinas all it wanted in a 14-7 second round game a year ago.

Coach Ryan Smith's Hershey squad was 2-3 at one point this season and then senior leadership took over and the Panthers have posted a sweet 4-1 mark since. The only loss in that string was to quarterfinalist North Platte St. Pats 32-0 in the last game of the regular season. Hershey has shocked two rated teams in the first and second round of these C-2 playoffs. The Panthers bested Perkins County 27-7 then really shook things up by sending Blue Hill packing with a 34-20 win.

Sutton has been unstoppable this season after returning all of their offensive lineman from a team that made the playoffs a year ago. The Mustangs have blown away everybody except St. Cecilia and Doniphan-Trumbull this fall. Sutton crushed Cambridge 56-0 in the first round of the C-2 playoffs, then sent Carl Tesmer's St. Cecilia boys home last Wednesday with a 30-14 beating. Every C-2 coach I have talked to this season has told me this Sutton football team is the real deal. I tend to listen to coaches when they talk about teams they have played.

Hershey has relied on an opportunistic defense in the first two round of the playoffs. In the Blue Hill game last week, the Bobcats had advanced the ball to the Hershey 1 yard line with 5 minutes left in the game, trailing only 21-14. But on 4th down, Hershey's Colton Marshall picked off a Parker Trumble pass and raced a playoff record 99 yards for a touchdown. The Panthers all lof a sudden had a 28-14 lead and would go on to add another touchdown when....you couldn't have guessed it....Mitchell Ruybalid stepped in front of another Trumble pass and returned it 70 yards for a score. What are the chances a team pulls off two pick sixes in a span of 59 seconds?

Hershey's evenly balanced offense is led by Gaige Marshall, who has rushed for 695 yards and 9 Tds. Colton Marshall has passed for 789 yards and 9 scores. The line is anchored by all-state candidate Logan Brown, who is nobody to mess with at 6-2, 260 pounds. Three players on defense have over 100 tackle points...Adam Steffes (127), Tyler Brown (108) and Josh Margritz (101). The Panthers have picked off 12 passes this season including 4 by Dylan Johnson and 3 each by Margritz and Marshall.

Talk about a balanced offense....Sutton is thee perfect example. 180 junior QB Cole Wiseman leads the offense while running backs Trae Raimer (Jr), Noah Johnson (Soph), and senior Mitch Carlson add to the diversified scheme. Carlson and 200 pound Max Olson head up the defense that seems to always come up with the big stop. Mustang coach Steve Raimer runs what he calls a pretty vanilla offense, but the thing that stand out above everything else with this Sutton team is that they just do not make mistakes and have turnovers. Seems like a recipe for success to me and their record shows it. This Mustang squad looks like a team headed for Lincoln.

Doniphan-Trumbull goes up to Crofton and lays one point short of half a hundred on the mighty Warrior defense? This Crofton "D" hadn't even allowed a thousand yards of total offense in 2012.

This was the same defense that held West Holt super back Josh Coyle to 15 yards rushing. So all D-T does is turn quarterback Riley Wiltfong loose for 20 of 23 passing for a school record 375 yards. The Cardinals amassed 548 yards of total offense in that game, including 170 yards rushing by Class C-2's top running back, junior Jordan Slough. Doniphan-Trumbull crushed Ravenna in the first round 46-0.

North Platte St. Pats has coasted through the season with it's usual stout defense, which only allowed only 39 points during the regular season while posting 4 shutouts. The Irish, a mainstay in the C-2 playoffs, beat Centura 28-0 and West Holt 32-6 to get to this fine quarterfinal match-up.

Doniphan-Trumbull has qualified 5 of the past 10 years for the C-2 playoffs and were pasted by this St. Pats team 58-20 in the first round of last year's playoffs. That was last year with no Jordan Slough and this is 2012 that has seen Slough establish himself as one of the finest runners in the entire state. Slough has rushed for 1,912 yards thus far, averaging nearly 10 yards a pop and scored 26 touchdowns. He also has 23 receptions for 295 yards and 2 scores. QB Riley Wiltfong has completed a staggering 129 of 192 passes for 2,149 yards and 28 scores. A more mind boggling statistic is the fact Wiltfong has thrown only THREE interceptions.... T H R E E! The Cardinals may also have one of the finest offensive/defensive lines I have seen in 2012. The only question mark all season has been the defense, which has given 229 yards a contest but when you have an offense like the Cardinals possess, it helps ease the problem. But a word of warning, North Platte St. Pats has the top defense in C-2, giving up only 161 yards a game......but also remember Crofton was only allowing 181 per game when they played Doniphan-Trumbull.

What can you say about North Platte St. Patricks? Ever since I was a child and the Dillon boys were roaming the field for the Irish, this football team has been the roughest, toughest bunch of hombres year in and year out C-2 has ever witnessed. They don't care who they play or where, plus St. Pats may have the best collection of high school football coaches around. They don't come much better than head man Kevin Dodson and assistant Mark Skillstad was a successful head coach before Dodson took the reigns. Brad Braithwait, Josh Kramer, Anthony Parker add a wealth of knowledge to the staff.

Obviously the defense is the mainstay of this football team, but the offense is nothing to sneeze at either. Quarterback Sean Keenan is the trigger man here and a couple of all-state candidates anchor the line in 210 pound Joseph Clinch and 175 pound Pedro Martinez. Martinez, pound for pound is one tough customer. The linebacker corps are headed up by 190 pound head hunter Henry Aufdenkamp. The Irish have been in the C-2 playoffs 11 of the past 12 seasons and have made it to the semi finals each of the past two years.

I am going to be at this gigantic match-up tomorrow and the winner of this baby could very well be headed for a clash with Sutton. I'll never sleep tonight....all I'll see is Irishman chasing Cardinals.