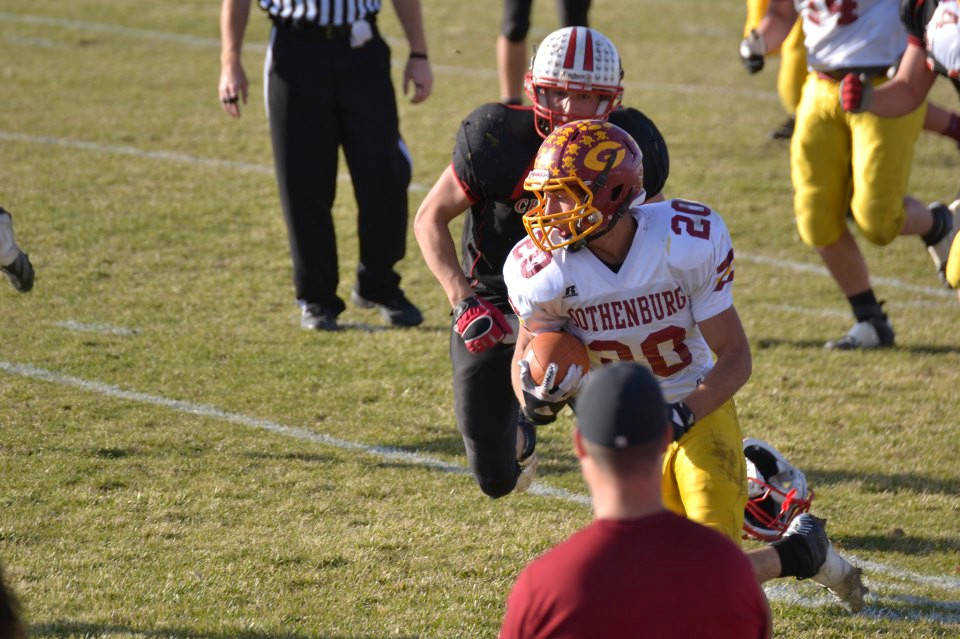 Boone Central/NG has disposed of 2 western Nebraska teams rather easily to advance to this game. The Cardinals shutout Ogallala 48-0, then travelled to Imperial last Wednesday and defeated Chase County by the identical 48-0 count. So naturally, since Boone is in the west bracket, another west team is on tap Tuesday....Gothenburg. Swedes coach Craig Haake always has Gothenburg ready to roll come playoff time. The Swedes have not only qualified the past 11 years in a row, but have advanced beyond the first round the past 4 seasons, and have made it to the quarterfinals 3 of those 4 seasons. Last year Gothenburg lost to Minden 35-6 in the quarters and they find themselves in that situation once again.

If you take a ton of stock in score comparisons, (sometimes shaky at best) Boone Central/NG should run away with this one. But if you've paid close attention to this year's playoffs I wouldn't take too much stock in that. While Boone beat Chase County, the Swedes dropped a 20-17 triple overtime to the Longhorns. Gothenburg also squeaked by Ogallala 17-12 to open the season.

Right now, it appears to me Boone Central/NG is headed to a finals match-up with Norfolk Catholic, but it's much too early to forecast that. The Cardinals can hit you with so many weapons offensively, and defensively they just do not break very often. They had Norfolk Catholic down by two scores in their game Sept. 7th, but you know how good Catholic is when the game is on the line.

Gothenburg beat Cozad in the 1st round of the playoffs 23-0, avenging a 42-7 regular season spanking by the Haymakers. Last week they eeked out a 12-0 win over a vastly improved Chadron squad on the road. So friends, we have a head to head clash between two teams that have not allowed a single point in the playoffs.

The Cardinals are led by QB Tanner Mazour who has completed 59% of his passes for 1,102 yards and 10 touchdowns. Mazour has also rushed for 782 yards and 20 TDs. RB Blake Slizoski leads the team in rushing with 882 yds. (17 Tds) and has blazing speed, along with Mazour. You will not find a more balanced defense than these Cardinals possess.

Gothenburg's wishbone offense rolled up 410 yards in the Chadron game, while the defense held the Cardinals to a total of 139 yards. Logan Sheets and Preston Franzen lead the way for Gothenburg on offense. The 190 pound Sheets, who ran for 610 yards a year ago, rushed for 137-17 against Chadron while Preston Franzen added 104-18. The Swedes feature a huge offensive line, led by 255 pound senior Jake Mattheis and giant 6-7, 245 pound sophomore Tanner Borchardt.

Oh, mother of mercy what a match-up we have here. Kearney Catholic jumps from C-2 to C-1 and never misses a beat......and that's difficult to do. Adams Central has swept through the season with a stingy defense, allowing only 13 points during the regular season. The Stars have a stellar defense of their own, pitching 5 shutouts and giving up only 30 points during the regular season. Kearney Catholic has defeated Central City 14-3 and Broken Bow 41-0 en route to this game. The Patriots have beaten Minden 38-13, and GICC 12-6 to get to this round.

The thing that looms huge in this game is the availability of all-state Adams Central running back Jake Fowler (ribs). Although it may be said that the Patriots usually need only two touchdowns to win any given game, this is the quarterfinals and this is Kearney Catholic folks. Not to say that Buzz Neiderklein has not done an outstanding job of filling in for Fowler, I believe the Patriots will need Jake Fowler to win this football game. Both teams have defeated Cozad, Minden and St. Paul, but while Adams Central easily disposed of Central City 40-0 during the season, the Stars for some reason struggled with the Bison in that 1st round game. Meaningful, who knows?

Kearney Catholic is a much more disciplined team than a year ago. This team seemed to have more penelties in games that I watched last season than Dennis Rodman had fouls in the NBA back in the day, yet they still recovered to win games. If you want to see a tackling machine, watch #24, Alex Lowe at work. This young man may be the best linebacker in the state, regardless of class. He led Class C-2 in tackles a year ago, and is the C-1 leader this season. Connor Streit, one of Kearney Catholic's 4 linebackers, is Lowes' partner in the blitz. Offensively, Thomas Conelly has rushed for 1,111 yards, but in the Broken Bow game last Wednesday, Alex Lowe led the rushing parade with 107 yards. Even Connor Streit, an offensive wide receiver, had 74 yards on 3 carries......scary team.

This current Ft. Calhoun team is nothing to laugh at. After finishing the regular season with a sparkling 8-1 record, the Pioneers won their first playoff game ever, beating Wayne 14-12 in a rematch. Ft. Calhoun had bested the Blue Devils 35-26 on September 21st. Last week they sent Ashland-Greenwood home 42-35 and about right now the Pioneers think they are pretty potent.

Catholic advanced to the quarters by blasting Raymond Central 57-13 and Boys Town 53-18....they don't fool around. The Knights only loss was to rival Pierce, 20-19.

Both have teams faced Wahoo in the regular season, Catholic winning 35-14, and the Pioneers dropping a 42-20 decision. But in that loss, Ft. Calhoun held Wahoo standout Tyler Kavan to 42 yards rushing.

Ft. Calhoun has a pair of 1000 yard rushers in slick quarterback James Kann (1,266/15 Tds) and James Rathjen (1,147/15 Tds.) Kann is a witty player and an outstanding team lead who has also thrown for 1,131 yards and 11 scores. Coach Michael Huffman also praised all around player Jaden Boudle, who has 34 catches for 579 yards and 10 Tds. Boudle also kicks off, returns kicks, is the place kicker and has intercepted 6 passes on defense. Then there's the man who gets everything going on defense, 6-4, 215 pound Joe Genoways. The OE/DE has intercepted 2 passes, block a kick and recovered 2 fumbles.

You really don't know where to start with Norfolk Catholic....everybody is talented. This team is so balanced on offense there have state championship teams in the past that have not had a 1000 yard rusher. It also helps to have one of the best coaches in the business in Jeff Bellar. Also helps to have a 3 year starter at quarterback that is the coach's son. Jordan Bellar has directed this offense with authority since his sophomore season and has done it with precision. Bellar has completed 61% of his passes for 1,424 yards and 17 touchdowns, while throwing only three picks.

Junior Jackson Love, a powerhouse 195 pound RB, has rushed for 790 yards. Then there's all-state and D-1 college prospect, Connor Ketter. Ketter's offensive stats won't floor you, but his defensive presence is imtimidating from his DE slot. Ketter has 75 tackle points and 4 QB sacks plus numerous hurried passes and break-ups. Rugged Kyle Schafer will knock you into next week with 91 tackles points and number 58, Mitchell Hoferer "quietly" (right!) contributes on "D".

Two of the other heavyweights in Class C-1 meet up for the first time this season. Wahoo's only loss was to Norfolk Catholic. Pierce, a winner over Catholic, stumbled to Boone Central/NG 21-7 on the last day of August. Both schools have a rich playoff history, especially Pierce. The Bluejays have been in the last 15 playoffs and 23 times since they were initiated in 1975. Pierce, who was beaten by Norfolk Catholic in the 2010 finals, have C-1 titles 2007 and 2008 in addition to 1977 when Kevin Bretschneider was setting career rushing records. Wahoo has been in the past 6 playoffs and lost to Platteview 21-10 in the semi's a year ago.

Pierce, a very balanced rushing team in years past, has depended on veteran Nate Meier this season for it's running yards. The 5-10, 195 senior has rushed for 1,326 yards and 20 Tds in 2012. Meier also leads the defensive in tackles. Quarterback Lane Rohrich has completed 58-91 passes for 753 yards and 7 touchdowns but Pierce always has had a stout defense as a calling card.

It's no secret that Wahoo is buoyed by 180 pound RB Tyker Kavan. Th all-stater rarely goes down on the first hit and has a lightening quick burst out of the backfield. Kavan has rambled for 1,830 yards in 2012 after hitting 1,895 a season ago. The Warriors boast the number offense in C-1, averaging 437 yards a contest and obviously lean heavily on the run game (301/per.). When the Warriors do throw, QB Jon Abbott is as accurate as it comes. Abbott has completed 61 of 86 passes for 860 yards and 9 scores and came through big time in the Warriors come from behind 41-25 victory against Lincoln Christian last Wednesday. It's bigger than it sounds because Wahoo had nineteen players suspended for the first half of that contest and Wahoo fell behind 28-0 to the Crusaders. Abbott played running back, quarterback, and receiver in that 1st half and also returned an intercepted pass and returned it 23 yards for a score to keep his team within striking distance in the first half.

This game could be one of the most heart stopping contests of 2012.....better get there early on Tuesday afternoon and take the blood pressure pills at breakfast.