BDS defense, passing game too much for Creighton. 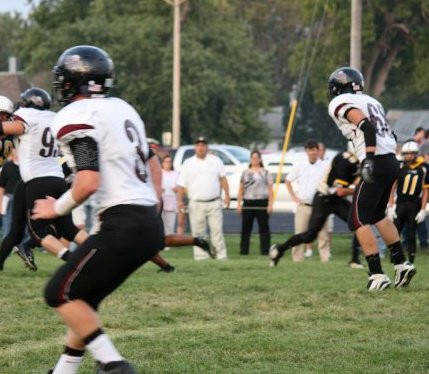 Bruning-Davenport-Shickley broke open a 14-8 halftime game and ran away in the 2nd half to post a 42-14 victory in the second round of the Class D-1 high school football playoffs Wednesday in Shickley. It was sweet payback for the Eagles, who lost a year ago to Creighton on a last minute pass completion for a touchdown that was first ruled incomplete by the officials. The 48-44 loss in the quarterfinals must have lingered for almost a year in the minds of the BDS football team because the Eagles unleashed a ferocious, smothering defense that came through when it mattered the most.

Coach Mark Rotter issued brand, spanking new black jerseys for the playoffs and it seemed to do the trick in the Eagles 41-0 1st round victory over Pawnee City and certainly seemed to provide the treat for BDS on this Halloween night. It was the stout defense that came up huge for BDS, as they stopped Creighton drives in the red zone once before halftime, and twice in the 3rd quarter to thwart Bulldog comebacks. And it was the 3rd quarter passing by BDS quarterback Ryan Tegtmeier immediately after those stops that spelled doom for Creighton. It was a pair of 55 yard touchdown strikes in the 3rd stanza that gave the Eagles the 20 point cushion they needed to nail down the win.

On a perfect 70 degree day for football, it was billed as one of the top match-ups in 8-Man football and the first half display of defense by both teams had all the makings of a low scoring struggle to the finish. BDS wasted no time on the opening drive, taking it 65 yards in 8 plays to hit the board first. Tegtmeier, the 205 pound signal caller, nailed senior RB Luke Christensen on a 29 yard TD strike to draw 1st blood. Creighton answered back on their second possession by taking it 70 yards in 11 plays for the score. 3 time 1000 yard rusher Jacob Morrill took it in from 4 yards out to give the Bulldogs it's only lead of the game 8-6 with 1:56 left in the first. The hard running junior had 54 yards on the drive. After a 3 and out for BDS on the ensuing drive, the Eagles got a break on the punt when Creighton sophomore Nathan Hendrickson mishandled the punt, fumbling on his own 31. The Eagles recovered on the Creighton 19 and two plays later Tegtmeier muscled his way in the end zone from a yard out to give the Eagles a 14-8 that would hold until the halftime break.

Creighton opened the 3rd quarter by marching from it's own 15 to the BDS 19, but the Eagles "D" came up big on a 4th and 2 to halt the drive. Five plays later, Tegtmeier found a wide open Grant Norder and sailed the sophomore a 55 yard scoring pass to give BDS a 20-8 lead. Creighton moved it down field in a hurry on the next possession when QB Bronson Pahl hit Reid Liska for a 65 yard gain to the BDS 16 yard line. But the BDS defense again stopped the Bulldogs movement on the 11 yard line to halt another drive. After a 3 and out by BDS, Creighton again mounted a 3rd quarter drive that saw Jacob Morrill carry the load to the Eagles 24 yard line. Once again, BDS stuffed the drive when Grant Norder blitzed in and spilled Bronson Pahl for a 1 yard loss on a 4th and 5.

It took only one play for BDS to score when Ryan Tegtmeier took a quick snap, faked a dive play, and found a streaking sophomore named Chris Lohr for another 55 yard score. The Eagles took a commanding 28-8 lead entering the 4th and money quarter.

The 8-1 Bulldogs didn't throw in the towel though, and answered back in 4 plays when Bronson Pahl dashed around the right side and ran 40 yards for a touchdown, shedding BDS would-be tacklers along the way. We had a ball game with 11:32 left in the 4th quarter with BDS leading 28-14. But the home town Eagles may have broken the backs and the spirits of the Creighton team on the next possession when they took nearly 4 minutes off the clock and ran 11 plays, culminating with a Ryan Tegtmeier 2 yard TD run. BDS led 36-14 with 7:31 left in the game and the season was slipping away from the very team that stole a win from the Eagles just a year ago in the quarterfinals.

Facing a 4th and 8 on their own 22 with just over 7 minutes left, Creighton coach Jeff Jensen decided to roll the dice and go for it, but a Bronson Pahl pass was too tall and BDS took over. It took on two plays for 170 junior Wayne Schoenholz to take an inside reverse 20 yards for a TD and salt the game away with a 42-14 lead and 6:31 remaining.

It seemed like a steep hill for Creighton to climb after what transpired a season ago. When two teams this talented clash with most of their starters returning, it seems like a tall order to stop a team that has revenge on it's mind and that's exactly what BDS had apparently been thinking about since last season. Senior quarterback Ryan Tegtmeier led BDS with 95 yards on 21 carries. Tegtmeier, a 2-time all-state basketball standout and a 1000 yard rusher a year ago, completed 10-20 passes for 206 yards and 2 touchdowns. Creighton's outstanding Jacob Morrill, one of only 5 freshman to ever rush for a 1000 yards, was held to 115 yards on 28 grueling carries. The Bulldogs Bronson Pahl completed 4-10 passes for 93 yards for the game. BDS out gained the Bulldogs 366-277 for the contest.

Creighton ends the 2012 season with an 8-2 record and will pack in the uniforms and get ready for basketball and wrestling. For 9-1 BDS, it's on to the quarterfinals to meet the mighty Howells-Dodge on the road next Tuesday. The D-1 football power coached by Mike Speirs beat Guardian Angels Central Catholic 44-24 Wednesday night in Beemer in what turned out to be a wild Halloween night filled with stunning upsets.