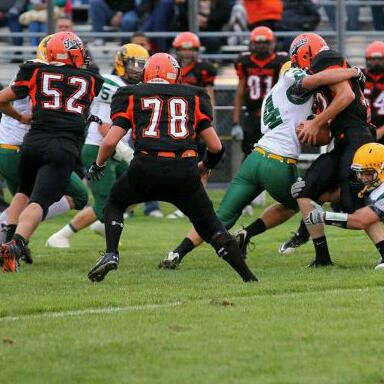 Kearney Catholic's Alex Lowe (green/white uniform) is one of the state's top linebackers, regardless of class.

Well, I've seen Boone play twice this season and once was against Norfolk Catholic. This bunch is a legit title contender with everything you would want in a football team. So very much in control of everything they do on both sides of the ball. Blazing speed on offense and one of the smartest, quickest quarterbacks in C-1 in Tanner Mazour. No more wing-T offense for this team. Arnie Johnson is right, takes too long for plays to develop in the backfield. The defense has no true stars...they're all good, as witnessed by the balance in tackle points. No weak links here.

Boone Central Offense: Powerful Blake Slizoski leads the way with 780 yards rushing, followed closely by the master of trickery, Mazour who has 751. Mazour has completed nearly 58% of his passes for 1,121 yards and 7 touchdowns (5 Ints.) Nimble Hunter Henry (6-1, 160) is the Cardinal's leading receiver with 351 yards (20 receptions) and 4 Tds. Henry is also a dangerous return man.

Mazour is the key to this offense and is very difficult for any defense to read.

BC Defense: Want a treat? Watch 6-6, 220 pound defensive end Beau Bremer eat up offenses. Mazour is a terror at DB and junior Derek Gentrup is a definite force in the defensive backfield. And yes, the Newman Grove kids have played a big part in this team's success in 2012.

Chase County: Up from C-2 a year ago, the Longhorns returned 8 starters on each side of ther ball. The offense has pretty much been able to put up points, even in losses excepting Kearney Catholic, who beat them 35-0. Chase is pretty quiet about their stats, but what we do know is QB Cale Gockley did a masterful job of competing his short passes in the second half of the 'Horns 21-7 1st round playoff win at Ord......all 9 matter of fact. Chase probably won't be able to run on Boone, so the ariel game may be the key.

.....if the Cardinals should be fortunate to win this game they will be guaranteed a home contest next Tuesday, facing the Chadron/Gothenburg winner.

One thing is for certain, Swedes coach Craig Haake knows how to make adjustments. After being beaten by Cozad 42-7 the last week in September, his team rebounded to "hold" speed merchant Jake Paulsen to 112 yards and post an about face 58 point turn around in a 23-0 1st round playoff win. Swedes have a dandy runner in Logan Sheets and backfield mate Preston Franzen is a fine runner also to balance things out. The Gothenburg defense had three stellar goal line stands in the Cozad game and will need to do the same out in Chadron.

The Cardinals have an offense that leans toward the pass. They average about 174 yards a game through the air, while running for 139. Chadron's defense is pretty stout, allowing only 216 yards an outing. I like the fact they came back and avenged a 20-14 OT loss to Valentine a week later by beating the Badgers 35-13....on the road. I saw this team play in the playoffs a year ago in St. Paul and QB TD Stein is a very nice thrower. Stein has passed for over 1,600 yards this year and the Cardinals have three excellent receivers in Spencer Eliason, Jackson Dickerson, and Chance Bila. Eliason and Dickerson both have over 400 yards receiving.

One can certainly assume the move from C-2 to C-1 hasn't bothered the Stars. Kearney Catholic posted five shutouts during the regular season and allowed only 30 points. The 4 linebacker set with blitzes galore features one of the toughest linebackers in the state, regardless of class in Alex Lowe. The rangy senior led C-2 in tackles a year ago with an amazing 194 total tackle points and his LB buddy, Connor Streit is no slouch himself. Thomas Connely leads the team with 1,037 rushing yards and QB Abe Clinch had thrown for over 1,200 yards. Two questions I have: Just how good is this Kearney Catholic team? Apparently pretty salty, but we'll find out when the going gets tough if they make it to the quarterfinals. The Central City scare last week is hard to call.

Bow is always tough at the end of the year, and escaped with a win over Gibbon after being outplayed for most of the game. Broken Bow will have to depend on the run game, averaging 185 on the ground per game. Scary thing for Bow is that QB Marcus Miller only completed 26-61 passes during the regular season, but on the other hand he averaged 18 yards a pop when he did connect. We'll see.

The Patriots were playing in the Class B semi finals just a year ago and have the stingiest defense in C-1 this season. Adams Central didn't allow a single defensive score until game 7 and still have had only 20 points scored on them when they have been on defense. The Patriots are so efficient they have not even given up a 1000 total yards in 2012. How are you going to beat a team that has only given up 968 yards in Ten games? 2011 all-state RB Jake Fowler has rushed for 1,509 yards and missed one game this season. His backfield mate Buzz Neiderklein has run for 643 yards and 11 Tds and would be a sure fire 1000 yard rusher if he were the featured back. Quarterback Creighton Reed only passes around 6 times a game, but has thrown for 879 yards and 6 Tds.

The Patriot defense has picked off an incredible 16 passes this fall, with speedy Blake Overmiller leading the way with six. 6-2, 210 LB Jesse Ackerman is a fierce tackler and heads the team with 87 tackle points and has pirated two passes himself. Not a week link on the defensive side and Coach Bill Carlin is one of the best in the biz, with the ability to not only make adjustments at halftime, but can do it at anytime during a game. AC won a meeting with this team a couple of weeks back 36-6.

Never know about those Cowboys, but Norfolk Catholic has won the last two C-1 titles and is on another level in C-1. Yea, they lost to arch-rival Pierce, but anybody that beats Boone Central this season has to be good. Catholic has had a brutal schedule, but has had the luxury of having a three year starter at quarterback in Jordan Bellar. Doesn't hurt that Bellar's dad is arguably the best coach in C-1 either. Jackson Love is a punishing runner, who gets a ton of yards after contact. All-state defensive end Connor Ketter is one of the best there is and is only the third leading receiver on offense. It will take a pretty good football team to knock these guys out of contention for a third straight C-1 crown.

Boys Town's only three losses have been to Pierce, Wahoo, and Ft. Calhoun, all top notch C-1 clubs. The Cowboys have given up 92 points in the last 3 contests, which is a point of concern.

You always have to be concerned with BT's speed and athleticism and this season is no excepetion.

Trey Scott is the leading rusher with 651-87 carries and 10 scores. Quarterback Josh Hayden has connected on only 37% of his passes yet has 1,125 yards and 10 touchdowns. Down side is his 8 interceptions. Cowboys have given up lots of rushing yards, but have a decent enough pass "D" to only allow 69/game. High point of the season was an opening night shellacking of Lincoln Christian 61-27. Low point was the next week when Wahoo pasted the Cowboys 45-18 and Tyler Kavan rushed for a gazillion yards.

Ashland-Greenwood rebounded nicely from a 3-6 record a year ago with a 7 win campaign this year. Sour note was a 62-0 loss to Wahoo in the regular season finale, but a 14-6 1st round playoff win over Syracuse made amends. 180 pound senior RB Jordan Scheil leads the team with 824 yards and has 13 touchdowns. Quarterback Gunnar Garner (Say that 3 times in rapid succesion) has completed 59 of 114 passes for 748 yards, but has 8 interceptions and 7 touchdowns. Senior Russel Beard leads the defense with 91 tackle points and is also the fullback on offense (457 yds). Garner and Scheil have 5 and 4 interceptions on defense respectively.

......Ft. Calhoun pasted Ashland-Greenwood 46-12 on September 14th and we'll see if that makes a difference Wednesday. Rematches are never a picnic for the previous winner.

Oh boy, what a nice match-up this appears to be. Wilber-Clatonia is only a year removed from C-2 and has done nicely, losing only to number one Adams Central 21-7 in Week 2. Only blemish Pierce has is to Boone Central 21-7 in Week 1. The Bluejays leader is the very tough Nate Meier, who has over 1,100 yards rushing, 600 yards passing and leads the defense with 91 tackle points. Pierce has given up only 160 yards/game of defense and "ain't" gonna give on the ground. In fact, the 'Jays haven't even given up 500 yards through the air all season either. And remember....they beat Norfolk Catholic. Balanced, balanced team that has a super coach in Mark Brehmer.

The Wolverines (LOVE those uniforms!!!) seem to never run out of Zlab boys. They like to run the ball (207/game) and QB Foster Zlab is the leading rusher with close to 600 yards and has thrown for 706 yards and 7 scores during the regular season. Sophomore Carter Zlab is a speed merchant. The defense is the 3rd best in C-1 (one ahead of Pierce) and gives up only 143 yards a contest. Foster Zlab has recovered 3 fumbles this season. Remember also that W/C was the only team to score on Adams Central through the first 7 games of 2012. Outside of Adams Central's 21 points, the Wolverines have given up just 36 points in 9 games.

I wonder if Wahoo has ever played at Seacrest Field? That's where they'll meet the Crusaders, who rebounded nicely from that 61-27 drubbing by Boys Town in the season opener. Other losses were 35-7 to Wilber-Clatonia and 28-21 to Falls City in the regular season finale. Big story for this squad was the magnificent 45-39 win over highly touted Columbus Lakeview last Thursday in the first round of the C-1 playoffs. Christian is always a tough playoff team and is led on the ground by junior Ben Plambeck, who has 1,176 yards. Check out this stat....Lincoln Christian rushed and passed for an identical 1,490 yards during the regular season. What are the chances of that happening? The down side is that Christian has given up a gigantic 360 yards a game of defense. Pretty simple for they Crusaders. They'll have to put up big numbers offensively to beat Wahoo.

Only one hiccup for Wahoo this season and that was a 35-14 loss to Norfolk Catholic. We'll forgive that one. The Warriors are headed up by one of the best backs in the state, and maybe the best overall in Tyler Kavan. Kavan, who ran for 1,895 a year ago, has an unofficial 1,830 yards so far in 2012. Waho, who boasts the number one offense in C-1, runs for an average of 332 yards per game and passes for nearly a hundred. The defense gives up around 220 a contest, but the Warriors were never pushed outside of Norfolk Catholic, although Ft. Calhoun held Kavan to less than 50 yards. QB Jon Abbot leads the Wahoo defense with 88 total regular season tackle points and Kavan and Gavin Iverson have each recovered 3 fumbles. One thing that has to concern Christian is the fact Wahoo blew out Ashland-Greenwood 62-0 in the final regular season game. A/G is still alive in the playoffs in C-1.