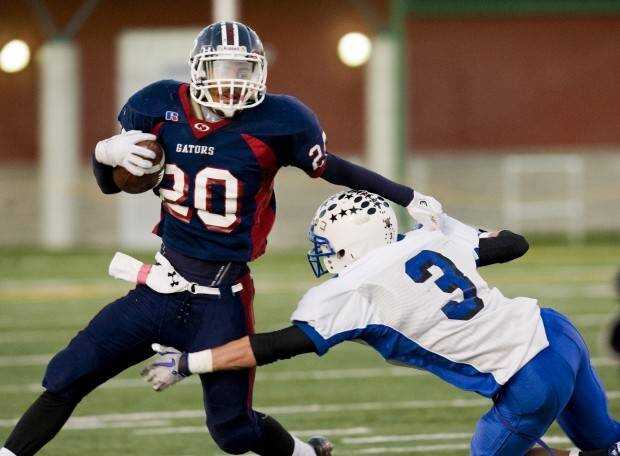 *Jacob Morrill-Creighton-1,347 (Jr) -- This Junior is already a two year 1000 yard rusher for the Bulldogs. In 2011, Morrill became only the 6th Freshman in Nebraska high school football history to crack the 1000 yard rushing mark. Not only that, Morrill started in a state championship game that season and looked like a veteran, winking at the camera when he was introduced in the pre-game festivities at Memorial Stadium in Lincoln. Seems to me Creighton will always be competitive in Class D-1 after playing so many years in the 11-Man ranks so Morrill will probably always have the line to open those holes for him. Jacob Morrill has all the tools a back needs to get those yards when you need them. Nothing fancy about this kid, just a plain old pure football player that shines on either side of the ball.

*DeQuan Bell-Omaha Roncalli-1,336 Yards -- Man, did this kid burst on the scene a year ago. Only a sophomore and 5-9, 150 pounds soaking wet, Bell really camed on toward the end of the season, leading Roncalli to 6-4 record and even picking up a playoff victory. This fall the Crimson Pride move up to Class B and buck heads with Omaha Skutt, Omaha Gross, and Ralston in district play alone. If the smallish Bell can hold up in Class B, his worth will increase substantially. DeQuan Bell is slippery as an eel, cuts on a dime and is tough to take down one on one. I saw this kid play against Columbus Lakeview in round 2 of the C-1 playoffs and was blown away.

*Tyler Schnitzler-Kenesaw-1,326 Yards -- Talk about bloodlines. Schnitzler has been the starter for his father's (Craig/head coach) Blue Devils since his freshman season. Schnitzler is a solid 6-1, 17o pound specimen, who possesses high intelligence, level headedness, and is a skilled master every time he handles the ball.........which is on every play. In addition to running for 1,326 yards last season, Schnitzler passed for 930 yards and 14 scores. He is also a feared return man and is a nightmare for opposing defenses when he runs the option. Tyler Schnitzler is a coach on the field and my best description for this youngster is "Field General Extraordinaire". Kenesaw will be very good this fall.

*Tanner Rupprecht-Red Cloud-1,314 -- Gosh darn it, if I had a Genie grant me a couple of wishes, one of them would be more bodies at Red Cloud to play football. Year after year this bunch plays with dangerously short numbers, yet excellent coach Jason Heldt gets a 110%/never quit attitudes from every one of his players. Rupprecht takes a frightful beating game after game, but the 5-7, 165 pounder keeps on truckin'. What makes matters worse is Red Cloud is Class D-1 and has to knock heads with bigger teams week after week. Despite all these mountains to climb, I'm betting the tough Tanner Rupprecht will rack up another 1000 yard season in 2012.

*Austin Havlena-David City-1,311 Yards -- Ooooo boy, this dude is scary good. Havlena followed 2 year thousand yard star Seth Behrens last year and stepped in and was to the go-to back, responding big time. The 5-8, 170 Havlena has superior vision and can get to the outside in a hurry and then has the ability to show his speed and outrun the defensive backfield. The Scouts run that play so well and Austin is an old pro at making the cuts and reads. Havlena gets to the corner quickly on sweeps and has the ability to bounce off tacklers like a pin ball off a bumper. Number 31 is also a nice cornerback for the Scouts and should have a big 2012. Very good basketball player and top notch hurdler in track.

*Alex Brehmer-Lyons-Decatur NE-1,303 Yards (Jr). Brehmer is one of those "childhood stars" that started for the Cougars as a Freshman at quarterback. Alex led his forces to their first playoff berth since 2004. After rushing for 846 yards in his rookie campaign, Brehmer scooted for 1,300+ a year ago. Brehmer takes the direct snap most plays and just plain and simple follows his blockers, trying out sprint the defense. This kid a fast and slides by tacklers, then turns on the jets.

*Austin Ruskamp-Freeman-1,246 Yards -- This 155 pounder averaged 8.4 yards a pop last season on his way to 26 touchdowns and 166 points, ninth best in a tough D-1 class. Freeman enjoyed great success last season, even blasting perennial power Bancroft-Rosalie 63-28 in the first round of the playoffs and nobody does that. I'm telling you right here, right now, this guy is of the best backs I saw all year in 2011. Ruskamp has blinding speed, shakes off tacklers, catches passes, has has some cutting ability rarely seen in 8-Man football. As a punt returner, Ruskamp is a threat to go to the house every single time. Put this guy in the Howells backfield and he runs for 2500 yards.

*Anthony Graesser-Sandy Creek-1,246 Yards -- This is just fact, folks. Most fine running backs from Sandy Creek fly under the radar because you never stats during the season. Well, this kid didn't get away from this old guy noticing......and how. Graesser is 6 feet tall, a hundred ninety two pounds and runs like a :10.9 sprinter with fullback/linebacker type power. It has been a while since I've seen a runner this size with the ability to get to the outside in this big of a hurry, follow his blockers, and take off with nobody able to catch him. My lord, Anthony Graesser must have had several long jaunts for TD's a year ago and once he cleared himself of defenders, it was "Katie bar the door". Not very many defenders are fond of taking this kid head on and Graesser knows it. On defense he had 34 unassisted tackles and 36 assisted for 102 tackle points. Now this is no stretch.....Anthony Graesser is college material, and I'll verify that one.

*Michael Minter-Lincoln North Star-1,176 Yards -- Well, almost every high school football fan in the state and beyond knows about former Husker Mike Minter's little boy by now. An absolute game changer in so many ways, the 5-11, 180 pound 3 star recruit is without a doubt, Division One material and most folks in these parts are getting down on their knees before they retire for bed and saying a few that Michael Minter chooses Nebraska for his college football future. Obviously, Mike Minter Jr. can run the ball, not quite in the class of Jakie Davis or Devon Washington, but plenty good. Minter's forte is defense. He had 4 interceptions a year ago and 2 went for scores, one of 58 and the other an sparkling 89 yard pick six. When Miner makes an open field tackle, he literally plants people. Oh yea, Michael Minter is also one of the most feared return men in the state. You had better see this kid if you get the chance. He will be in GI on October 5th and in Kearney the very next Friday.

*Matt Klein-Scottsbluff-1,159 Yards - Klein is listed as a RB/Receiver and for good reason. He is a solid 6-1, 170 and faster than most. Granted, not as swift a teammate Luke Worden, quick enough to break punts for touchdowns. Matt Klein also shed tacklers as frequently as an old hound dog does his coat in the summertime. The Bearcat star is actually getting some D-1 looks because of his athleticism, toughness and versatility. Colorado, Colorado State and Wyoming have shown some mild interest. Matt Klein is Scottsbluff's featured back and just may be the best back in Western Nebraska.