Scottsbluff was no "David" in the Class B tournament field. 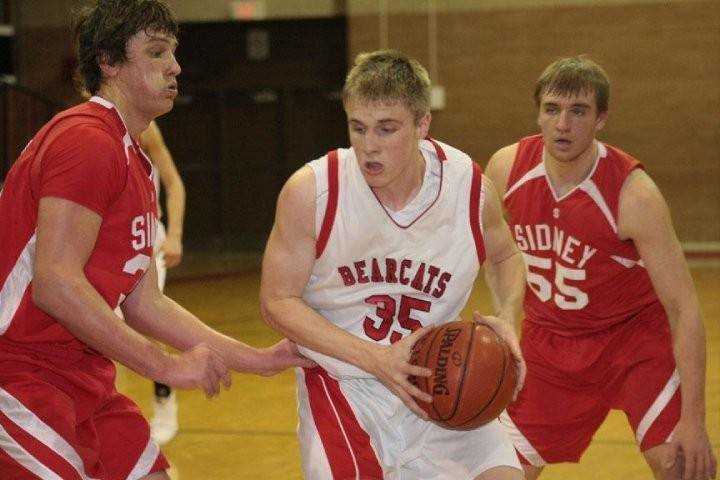 For those who thought Tony Siske's Scottsbluff Bearcats were playing the roll of "David" in last week's Class B state Tournament, think again. They may have knocked off the two top dogs in Class B on their way to the title, but this was no David and Goliath story. The Bearcats were for real all season long and gave notice to teams around the state's Class B circles when they played Class A Norfolk to within 77-70 in the Greater Nebraska Conference tournament in late December.

Most of you may have heard that Coach Siske informed his team before the season began that they were going to play 28 games during the 2011-2012 campaign. And those players were smart enough to realize that playing 28 games meant they have to be in the State Championship Class B game to accomplish that goal. The rest is history, but what this young coach and his Bearcats pulled off last week will not soon be forgotten.

How valuable was it to Scottsbluff to have played in the State Tournament a year ago? Siske's bunch lost to a very good Lincoln Pius X team in the first round a year ago, but that loss served as a springboard to bigger and better things in 2011/2012. The opening game against Aurora was a bit jittery for the 'Cats, but the Huskies had players that were draining the three that had not done it very frequently during the season. One thing remained a strong point for Scottsbluff all season, and that was their stingy defense. The 'Cats allowed only 49.6 points a contest and that would be the very phase of the game to carry them to glory...­..and how.

The Bearcats faced one of the most well balanced teams in the field during the semi finals in Beatrice. They don't get much better in the coaching ranks than Jimmy Weeks, but Tony Siske and crew took 'em on and brought 'em down. Scottsbluff trailed Weeksey's bunch 53-47 with just 2:45 left and for most teams that play the Orange, that would spell defeat with a "D". But the Bearcats used the trey, a couple of three point plays, and a key defensive play to get back within one before steady Michael Hadden drained 2 free throws to give the 'Cats a 61-60 with 17 ticks remaining. A desperation shot by high scoring Trey Bardsley never materialized and the Bearcats were in the Finals for the first time since 1955. Hadden incidentally, was playing with a broken pinkie in this game and also for the finals to make things more incredible.

In the finals, Tony Siske and his staff came up with a defensive plan so sterling that they should receive a national award for the performance. South Sioux City was the foe, Mike Gesell was coming off a 39 point semi final bash, and Austin Groth, alleged suspension and all, was going to start the game. After trailing 24-20 at haftime, "The Sisko Kid's" Bearcats came out and stuffed Gesell and his compadres 25-7 in the 3rd quarter, then withstood a furious comback by Gesell himself and sent the Cardinals packing with some Carma. Whatever The Sisko Kid said at halftime should be bottled and kept in a Scottsbluff school vault because S.S.City's D-1 prospect, who was stuffed for most of the game, was given more of the same medicine in the 2nd half. Even though Gesell ended up with 30 points, three of them coming on a half court game ending trey, his points had to be the quietest 30 in state tournament history. Gesell's 4th quarter baskets were cheap at times, but threw a scare into the Bearcats nonetheless.

Scottsbluff's Richard Williams did a magnificent job guarding Mike Gesell all afternoon and in the process may have altered the Iowa recruit¡¯s start to his college career. Up until this game, Gesell had been held scorless in only two quarters of his entire career...TWO. But Williams and the Bearcats held him without a point in both the first and 3rd quarters which begs the question "if Scottsbluff can hold Gesell down like this, what will a major college the Division One Big Ten Conference be able to do?" Just a thought. What makes this so special to me at least,is that I think Mike Gesell is one of the best high school basketball players I have seen in a long while and I do wish him well at the next level. With a couple of seasons under his belt in that enviornment, he may be very good at that level.

Omaha Gross was a very nice basketball team that, along with S.S. City's Gessell, had one of the most prolific scorers in the state in Dylan Travis. SSC did a wonderful job shutting down Travis though. The high scoring senior, who averaged 25.8 points a game during the season, was held to 2 points at the half in the S.S. City/Gross game and had only 4 after three stanzas. Travis did end up with 15 for semi final contest, but it was too little, too late. He did heat up for 26 in the 3rd place game loss to Beatrice though.

Lincoln Pius closed well during the late stages of the season, but it seemed that Erich Nickman was a marked man during his senior campaign and could not get the 'Bolts over the hump that would have propelled them past the first round of this state tournament. Nickman is a very skilled player though and enjoyed a wonderful career for the Thunderbolts. Gering and Crete just plain and simple had tough draws. Crete's team was full of pure athleticism and Gering was a very welcome sight at the big show to our friends from the West.

Three players in this year's tournament are in the 500 Point Club. South Sioux City's spectacular Mike Gesell finished his senior year with 653 points, Gross ace Dylan Travis completed the year with 657 points to edge Gesell for Class B scoring honors. Beatrice sharpshooter Trey Bardsley scored 579 points to cap off a fine career for the Orangeman.