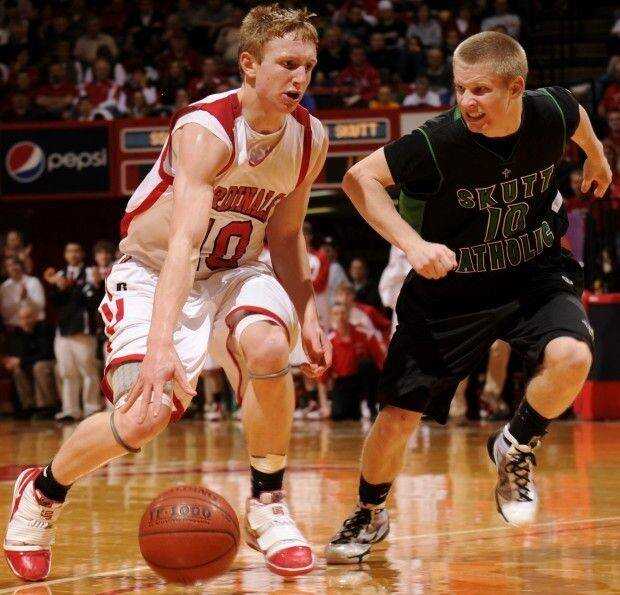 South Sioux City's Mike Gessel - He will be at the Heartland Hoops Classic this Saturday. (*photo courtesy of Journal-Star)

Circle it on your calendar, Saturday February 11th. Local promoter Tino Martinez has done it again, lining up an outstanding 8 game card that features some of the best basketball talent in the state, including powerful South Sioux City. Adult tickets are $12, Student tickets $6, and Courtside tickets $25. These tickets will be good for all day and you won't find a better value for this kind of entertainment. High School basketball classics of this type have come and gone in Nebraska, but the Heartland Hoops Classic is the only one left standing.

Here is a brief look at each match-up:

Giltner (19-0) vs. Overton (14-2): Defending D-2 state champion Giltner is currently rated #1 in their class and Overton is ranked at #7 in D-1. This contest spotlights two of the finest players in class D in Giltner's Drew Ott and Overton's Jacob Olmstead. Both were all-state players a year ago with Ott scoring over 500 points and grabbing over 300 rebounds. Olmstead fell just short of the 500 mark in scoring, but the inside match-up between these two all-state football and basketball stars should be a sight to behold. Giltner's crisp ball movement and team speed has them hitting on all cylinders and the Eagles' physical play and staunch defense makes them tough to score on.

Hastings St. Cecilia (11-6) vs. GI Northwest (10-7): The Bluehawks have won 3 of the last 4 class C-1 state titles. The Vikings are surging at the right time, recently winning the Central Conference tournament. All but one of St. Cecilia's losses has come at the hands of rated teams. Northwest features a deep bench that will wear you down and St. Cecilia has that always stout defense and boasts sharpshooting Phil Hamburger, who is a two-time all-state footballer and a quarterback on the hardwood.

Hastings Adams Central (13-4) vs. Pierce (10-7): A classy regional match-up featuring the hot outside shooting Patriots of Adams Central against the staunch, disciplined defense of Pierce. How good is Pierce? The Bluejays just won one of the toughest conference tournaments in the state Saturday night when they grabbed the Mid-States conference title. It will be the run'n'gun style of A/C against the patient, football/tough athletes of Pierce. Something has to give and this one could come down to the buzzer. I cannot recall the last time these two teams

Norfolk Catholic (14-5) vs. Sutton (17-2): Oh...My...Gosh! Only Tino Martinez could line up a regional game of this magnitude. A Classic meeting of C-1 vs. C-2 powers. Sutton is currently rated #2 in C-2 and the Knights are #5 in C-1. Norfolk Catholic has beaten teams like Wahoo, Wahoo Neumann and is the defending Class C-1 football and basketball champions. How good is Sutton? Their only 2 loses are to powerful Ravenna (49-48) and to C-1 St. Cecilia. The Mustangs' starting 5 has been together for seasons. By the way, that last time (and only time?) these 2 teams met........Sutton defeated the Knights 100-81 in the opening round of the 1990 C-1 State Tournament......how's that grab ya?

Doniphan-Trumbull (9-7) vs. GICC (7-10): These teams are a whole lot better than the records indicate and these two clubs feature two of the finest coaches this state has ever seen in D-T's Dave Oman and the Crusaders' Bill Gavers. The Cardinals just got better in January with the return of the Slough brothers and GICC's defense is improving with every game against a brutal schedule. D-T loves to get the ball inside to big 6-4, 240 pound Garrett Bunde. The Crusaders feature their usual smothering defensive pressure. Both teams have young line-ups with very

Gretna (9-7) vs. Minden (15-1): Another "Tino" clash for the ages. Battle tested Class B Gretna has lost only to top notch teams like Omaha Skutt, Boys Town, Elkhorn and Ravenna to name a few. They have fought through the loss of all-state Jared Blum, who was expected to carry them to new heights. But the Dragons have done very well considering and may give Minden their toughest test to date outside of Ravenna. The Whippets are currently ranked #2 in C-1, with their only loss at Ravenna. The current C-1 state runner-ups have outstanding shooters in Derek Kissinger and Carson Blum. Another one that could come down to the final ticks.....a dream game.

South Sioux City (12-5) vs. Grand Island (9-7): This is the headliner, folks! Tino has been trying to get the high flying Cardinals here since Mike Gesell was a freshman and finally succeeded. Gesell is a D-1 basketball recruit (Iowa) and his teammate Austin Groth is a D-1 recruit (Creighton) in baseball. Both are scoring around 25 points a game and may be the 2 best players in the state. Don't let South Sioux City's record fool you. Two of those losses came at the hands of top notch competition during the prestigious VisitMesa.com Basketball Challenge in Arizona during the holidays. How good was Gesell there? Nationally known sports scribe, Richard Obert of AzCentral.com said this: Gesell reminded me of Mike Bibby during his Phoenix Shadow Mountain days in the mid 1990's....he was that

Grand Island has been a very good basketball team at times and has two D-1 athletes of their own in Ryker Fyfe and Sam Foltz. Both are walking on a Nebraska in football. Fyfe is known for his thunderous dunks and athleticism. The Islanders will have their hands full with a South Sioux team that knocked off a then 2nd rated (Class A) Omaha Bryan team a couple of weeks back, 61-59. If the Islanders are on their game, this game is going to be a dandy.

SEM (7-8) vs. GI Heartland Lutheran (14-5): The nightcap features two very fine D-2 basketball teams. You will love Coach Lloyd Wagnitz' "Runnin' Red Hornets". Heartland Lutheran has tangled with such teams as Ravenna (#1 in C-2), Norfolk Lutheran High NE (#4 in C-2), and has beaten C-1 Lincoln Lutheran, a team that beat GICC earlier. SEM's is far better than the 7-8 mark they sport. The Mustangs have quality, skilled athletes who know how to play basketball. This baby could easily end up an 84-82 game. What a way to cap off a perfect day.

Remember, a ticket is good for all day, and you can go far and wide and not find a better day of high school basketball under one roof. See you there!