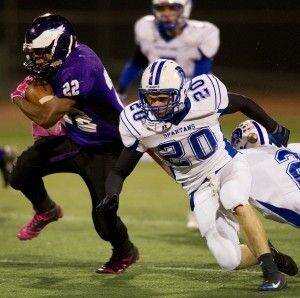 Solid line blocking and the crisp running of junior tailback Jackie Davis brought an end to a story book season to a solid Grand Island football team in the Class A quarterfinals on a blustery Friday night. The Eagles rode the legs of the shifty, powerful Davis, who ran for 171 yards of 31 carries to defeat the Islanders 34-24 in a battle of two teams that possessed speed unmatched in the state's top class. In the end, Central over came 81 yards in penelties and ran an offense that saw quarterback Will Burgess mix in the run and the pass in perfect harmony to advance to a rematch with number 1 Omaha Burke in next Friday's semi finals. In the end, it was the athleticism of the Metro's Omaha Central that finally wore down the Islanders in a match-up that was one of the best of the 2011 high school football season, regardless of class.

The pure athleticism of players like Davis and Mr. Everyhting, Darian Barrientos-Jackson was just a half a shoulder above what the Islanders could handle. Omaha Central was poised to have a breakout season a year ago and have seemed to improve with each game this year, but Grand Island countered with their own standout athletes like D-1 quarterback prospect Ryker Fyfe, and speed merchants, Will Bamesburger and Sam Foltz, and Justin English. But it was the line blocking of the Eagles that wore down GI in that second half, just as Lincoln Southeast did. But Grand Island never did "say die" and fought until it was in the books.

Things did not start well for the Islanders on their first possession as they suffered three straight penelites, 2 illegal proceedure calls and a delay of game flag that eventually pushed them back to a punting situation on their own 13 after they advanced to a 2nd and 1 on the 28 yard line. Central gained great field position when GI had to punt into the stiff south wind on this opening possession. Starting at the Islander 28, it took only two pops for the Eagles' Jackie Davis to dash 26 yards for the opening score. The point after was successful and Central had a 7-0 lead with only 3:02 into the contest. But Grand Island marched right down the field on it's next possession and fashioned an 8 play drive that culminated with Ryker Fyfe scrambling to his right, releasing the throw going out of bounds and nailing Sam Foltz in the extreme right corner on the end zone with a 16 yard TD strike. Brendan Wentling added the point and it was knotted at 7-7.

On Central's next possession, facing a 4th and 3 at their own 30, the fleet Foltz broke through and blocked the Eagle punt and the Islanders took over with great field possession at the 9 yard line. Central's rugged middle stuffed GI on the next three plays, but the trusty Wentling entered and nailed a 21 yard field goal to give the Islanders a 10-7 lead with 4:18 left in thre first. But the Eagles had a great kick return by sprinter Dennis Barfield to set up shop at the GI 49 yard line. 8 plays later, Will Burgess hit Barrientos-Jackson with a 10 yard scoring pass that saw the 6-2, 190 pound dynamo take a pass in the flat and weave his way through the middle of GI's "D" for the score. The Eagles had the first quarter advantage lead 14-10.

In the second stanza, Will Bamesburger pirated a Will Burgess pass at the Islander 22. But the Eagles returned the favor when stocky R.J. Jones intercepted an errant Ryker Fyfe pass and returned it all the way to the Islander 9 yard line. The Islanders would have nothing of this Eagles possession, however. After a 5 yard motion penelty on Central, Davis was spilled for a 5 yard loss, then BuomLuth Lual fought his way through and spilled Burgess for a 16 yard loss and Central was forced to punt on a rare 4th and goal from the Islander 35.

Later in the quarter, the Eagles gained possession of the ball at the Grand Island 39 yard line with a buck 28 left in the half and proceeded to drive it to the GI 17 with one play remaining. Will Burgess then threw a jump ball to the 6-2 Barrientos-Jackson in the end zone and he out jumped Will Bamesburger and Sam Foltz for the 17 yard score with just :07.6 ticks left in the half. Ramsey added the point after kick and Omaha Central's crucial score right before the half made it 21-10.

Jay Ball decided to pound the rock right at the Islander defensive line in the second half and that's when 1000 yard rusher Jackie Davis went to work. Davis, who is also an excellent defensive back for Central, keyed a 12 play, 5 minute and 6 second time consuming drive down the Memorial Stadium artificial turf. The GI defense took advantage of a controversial call however, to stop the drive. What appeared to be an incomplete pass was ruled a catch and fumble by TreDeon Hollins. A 15 yard unsportsmanlike conduct call on Central gave GI the ball on their own 36 following the turnover. The Islanders ate up the next 3:23 but had to punt with Central taking over at the Eagle 18. Central then orchestrated a killer 17 play drive ending with a Jackie Davis 1 yard blast. Ramsey's point after try was blocked by Justin English and it was 27-10 Omaha Central with 7:27 left in the money quarter.

The Islanders didn't throw in the towel and with a drive that started on their own 22, and moved it down the field in a hurry. The key play was a slick 35 yard completition from Fyfe to Bamesburger. 15 big ones were added on to the play when Central was flagged for roughing the passer. Now at the Eagle 25, Fyfe hit Jacob Cornelius with a 16 yard completion that ended up at the 9. Another roughing the passer call moved the ball to the 4, then Dylan Urias took it in from there for the score. Grand Island was back in the game, trailing 27-17. Another great kick return put Central in business at the Islander 48 and 5 straight carries by the sharp cutting, swivel-hipped Jackie Davis wore down the right side of the Islander defensive line. A reverse play to, who else, Darien Barrientos-Jackson resulted in a 15 yard score and the crushing blow was delivered with only 2:29 left.....Omaha Central leads -- 34-17.

Just as Grand Island had done all season, they turned to the magic of Ryker Fyfe to try to pull off a fairy tale ending. The rifle-armed Fyfe went to work from his own 35 with 2:21 remianing. He found Bamesburger for 8, Justin English for 12, Cornelius for 18, another strike for 6, then called his own number and ran for 11 yards, then 6 more for the score, smashing over Central tacklers for the final 5 yards. Wentling was perfect into the teeth of the gale winds and it was 34-24 with 73 seconds left and only an onside prayer kick to go. Wentling's attempt bounced high and sailed harmlessly out of bounds and the Islanders saw a glorious 2011 season expire. Will Burgess took a knee twice to end the great battle.

It was the superior line blocking of the Eagles, the running of Davis and the athleticism of Barrientos-Jackson and TreDeon Hollins (both standout basketball players) that spelled the difference. Also the sharp, pinpoint passing of senior quarterback Will Burgess made a huge difference to balance the running game. Burgess ended the windswept night completing 10-17 passes for 123 yards and 2 TDs. Barrientos-Jackson hauled in 5 of those throws for 45 yards and 2 scores. Hollins had 4 receptions for 52 yards. For Grand Island, Fyfe, who had 70 yards passing at the break, ended up completing 15 of 27 throws for 193 yards and a TD. The sure-handed Will Bamesburger grabbed 7 receptions for a whopping 112 yards.

Omaha Central coach Jay Ball credited his two defensive ends, Alex Williams (#80) and Davon Stennis (#90) for applying pressure on Ryker Fyfe all evening. Actually, Fyfe had really not been pressured much the entire season, thanks to the great line blocking of the Islanders.

Omaha Central advances to the Class A semifinals to meet unbeaten and top rated Omaha Burke (11-0) The Bulldogs handed Central their only loss in the season opener 14-7. Grand Island closes the season at 9-2 and complete one of the most successful seasons in recent history.

*It's hard to buck history, friends. Since the high school football playoffs began in 1975, only 4 out-state teams have won a Class A title. Grand Island won a dandy in 1978 (over Creighton Prep), Hastings in 1993, and Norfolk the next year. But only once in the past sixteen years has a non-Omaha or non-Lincoln team won an "A" title. Only Kearney cracked the out-state curse in 2006. Is it a curse, or is it just the depth and and deep pool of athletes that Metro schools have access to?

I witnessed the amazing talent of this Omaha Central football team after spending a day and night with them last October 15th. Players like Barrientos-Jackson and TreDeon Hollins are mainstays on a State Championship basketball team that is almost a shoo-in to win it all again this season. The Barfield boys, Dennis and Devin, both led the Eagles to an easy State Track title last spring. Even though there are a few Grand Island athletes that measure up to some of these guys in track, there just aren't enough of them to overcome the depth and athleticism that a team like Central presents, but nobody can ever state that GI did not compete until the end with this Central team that may just win it all this season.

*It was a sight to behold to see two of the best coaches in the state in Jay Ball and Jeff Tomlin exchanging a few thoughts prior to the game Friday. You can't find 'em any better than those two.

*Here's hoping that official Greg Hardin is alright after being steamrolled by two huge lineman on an play that carried out of bounds. I'll bet he's feeling it today. Great job for hangin' in there, Greg.

*It will be a while before you witness this kind of speed from an Islander football team and quarterback Ryker Fyfe may very well end up playing for a Division One football program.......Boise State?