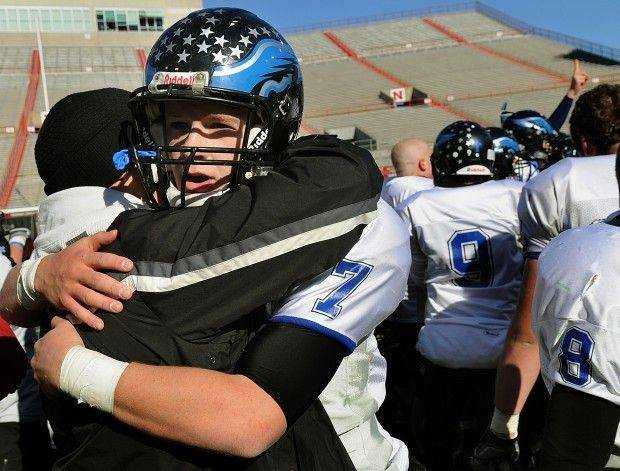 *Phil Hamburger-Hastings St. Cecilia -- Had 120 yards on 14 carries, was 8-12 for 142 yards passing and led the Bluehawks back when they were down 14-10 and being out played by Kearney Catholic. The senior signal caller led his team on drives of 79 and 96 yards in that 2nd half to the 24-14 come from behind, season opening victory Friday night in Kearney.

*Matt Chitwood-McCook - Senior calmly booted a 27 yard field goal through the uprights in the 2nd overtime to propel the Bison to a 16-13 victory over #3 Aurora Friday. Chitwood is a team leader to say the least.

*Jake Ek-Columbus -- Slick quarterback ran for 153 yards on 13 carries and passed for a whopping 280 yards on pinpoint 12-14 accuracy in a 56-21 romp over North Platte. Ek, who is also an outstanding baseball player, amassed 433 yards on the ground and through the air for the visiting Discoverers.

*Luke Worden-Scottsbluff -- The lightening fast Worden touched the ball 5 times via the rush and scored on runs of 43, 88, and 25 yards, accumulating 159 yards in Friday nights 49-7 romp over C-1 Mitchell.

*Jackie Davis-Omaha Central -- The shifty senior led the Eagles to a 34-14 win over rival Omaha North in a game that spanned 2 days because of a lightening delay. Davis scored on runs of 3 and 35 yards and hauled in a 12 yard scoring pass while running for 136 yards on 21 totes.

*Carson Collins, Zach Cook, and Jordon Nelson-Omaha Burke -- In a battle of Numbers 1 and 2 in Nebraska high school football, the Bulldogs brought down defending state champs Millard North 49-34 in a game that took two days to finish. Quarterback Cook tossed 4 Td passes Friday night before lightening halted the game, then Saturday morning the 'Dogs turned to the Wildcat formation and let the 5-11, 225 pound Carson pound the Mustangs for 136 yards on 14 carries and 3 Tds. (52, 9 runs , 15 pass reception). Also taking direct snaps from center, Nelson rushed for 112 yards on only 7 carries ans scored on a 59 yard run and caught a 58 yard pass from Cook. Cook finished the 2-day affair 9 of 14 passing for 202 yards and no interceptions.

*J C Hanna and Sam Simonson-GI Heartland Lutheran -- Hanna ran for 151 yards on only 12 touches and quarterback Simonson threw for 165 yards and 5 scores on nearly perfect 13 of 15 passing in a 47-28 season opening win over Lawrence-Nelson.

*Michael Minter-Lincoln North Star -- Get used to hearing this name. The son of former Husker and NLF player Mike Minter ran for touchdowns 1, 41, and 18 yards in a big 45-19 win over Omaha Benson in another 2-day game. Minter, a junior, transferred to North Star this year from North Carolina and is just getting used to coach Mark Waller's offense. Stay tuned as the season progresses for this kid's progress.

*Austin Casperson-Centura -- Sprinted for 175 yards on 21 carries in a 28-26 loss to Cozad Friday night in Cairo. Casperson scored on runs of 72 and 7 yards and hauled in a 23 yard scoring strike. The Haymaker's speedy sophomore sprint sensation, Jake Paulsen ran for 161-30 in the game.

*Tyler Thomas-Central City -- The highly touted sophomore rushed for 136 yards on 27 carries as the Bison opened 2011 with an 18-0 win over Wood River. I have heard from more than just a few coaches around the area that young Thomas should be a 1000 yard runner because of his abilities and Central City's huge, talented "O" line. We'll follow this guy closely.

We told you last week about 6-Man Texas high school sensation LaJordan Wilkenson rushing for 591 yards on 34 carries and scoring 13 touchdowns in his San Antonio Winston School's 109-105 win. Well last Friday, Wilkenson almost equaled that total by running for 583 yards on 47 carries, and he also he matched his previous week's touchdown total of 13. Winston School beat Town East Christian 122-120 and broke the Texas single game combined scoring record. The 142 points were the most ever scored by two teams in one game.

LaJordan Wilkerson's two game totals are 1,174 yards and 26 touchdowns. Yes, he leads the NATION in both categories. The 5-11, 195 Senior is about as untouchable as they come in the game of 6-Man football in Texas. We'll be receiving game film on him a few days.