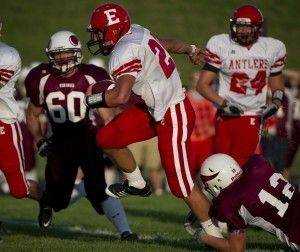 *McCook grinds it out against Scottsbluff: The Bison (as usual) have a strong running game as Scottsbluff found out Friday night. The Bison offense rolled for nearly 300 yards with Justin Terry leading the way with 104 yards on only 10 touches. Matt Chitwood added 89 on 10 carries and Jake Slager chipped in with 63-17. The McCook defense stiffled the Bearcats offense, holding them to a meager 23 rushing yards and 126 through the air. Bring on Aurora.

*Giltner can throw the forward pass: That may be an understatement as Hornet junior QB Jake Findley tied a State single game 8-man passing record by throwing for 487 yards in his first game under center. Against Shelby Friday night, he completed 22 of 29 passes and 7 went for touchdowns. Giltner also set a Nebraska single game passing record by throwing for 571 yards as a team, eclipsing the old record held by Potter-Dix of 511 set in 2009.

*Millard North can still run the football: In a season opening 35-7 win over Creighton Prep, the defending Class A champions unleashed a brutal ground attack by turning loose quarterback Isaac Aakre for 249 yards on 23 carries, RB Cale Korbelik for 150-12 totes and FB Chris Bailey for 50 yards on 10 carries. The trio gained 450 yards rushing before hitting the bench for a well deserved rest. The Mustangs face Omaha Burke Friday in a battle of numbers 1 and 2 in Nebraska high school football.

*Hastings High rolls: How great is it to see the Tigers win a game 47-0? The win over a young Schuyler squad had to bring back memories of the glory days back in the mid 90's. QB Ty Ripperberger ran for 151 yards and 3 scores (12-60, 3 yards) and was 7-8 passing for a buck 36. Hastings High has a huge home game next Friday hosting cross town rival Adams Central. That baby will set the tone for the rest of the season for the Tigers.

*Howells is still rolling with the rush: What else is new. The Bobcats began their final season before merging with Dodge by pasting West Point Guardian Angel 50-0. I have a feeing coach Mike Speirs was kind in that one. In a play book that seems to have only 5 plays, the mighty Howells just runs the toss sweep, unleashes the "killer B's" line and dares you to try and stop them. I guess Mike wanted to something different on the game's opening play, so he lined up 3 receivers to the left and QB Mitch Belina took the snap, launched a pass to 2000 rusher Trent Mastny who sprinted 55 yards for a score. How do you stop these guys......maybe you don't.

*Dagen Worton-Lincoln High: Wow, a notable performance for the Links! Fame and fortune has not been on the side of Lincoln High in football in recent seasons, but Friday night the nimble signal caller ran for 190 yards and 3tds, and completed 4 of 10 passes for another 197 yards in a heartbreaking 38-35 loss to North Platte. The Platters kicked a 32 yard FG with one tick left to beat the Links.

*Was Crete's #1 pre-season rating in Class B too lofty or is GINW that much improved?: I think the Cardinals rating was justified and Northwest has improved. They had Chuck McGinnis' forces on the ropes the entire first half of a game that began with some fireworks. The Vikings Kyle Bockman returned the opening kick-off 94 yards for a score, then on the ensuing kick-off Crete's speedy Cory Kalkwarf ran the ball 95 yards for a score. Last time I saw that happen was when Superior played Aurora and Tom Kropp was on the field for the Huskies. Crete lost some key players from last year's state championship team and the line was shaky in the first half, but Chuck McGinnis is a wise bird and had things straightened out after intermission, limiting Northwest to nothing on the ground........Crete will be OK and the Vikings will make huge strides in 2011.

*Was Aurora overrated at number 3 in Class B? NO. Same deal here, folks. The Huskies lost many key players including the all-everything Tyson Broekemeier and the defensive line was unstable in the opener against Seward, but Randy Huebert and his coaching are tops and the Aurora will be fine. They had better be fine in less than a week, however, because a trip to a much improved McCook squad awaits them this Friday.

*Grand Island is FAAAAASSSST: The Islanders looked like a super track team in the 35-0 dismantling of a young Norfolk team Friday. Quarterback Ryker Fyfe can throw the ball, friends and his receivers look like a Whos Who from the State Track Meet. By the way, the Islanders led 35-0 at intermission before Jeff Tomlin called off the dogs.

Will 2011 be the year Grand Island beats Kearney? Could be, and a lot more.

*Looks like Pawnee City can run too: Devon Marteney ran for 237 on only 15 carries and quarterback Grant Borcher added 126-15 and had 13 solo tackles against Johnson-Brock in a 50-20 romp.

*It took 2 different fields for Burwell to beat Elm Creek: The 'Horns thought they were playing an away game at Elm Creek, but a short in an electrical box on one of the light poles caused some post 4th of July fireworks and they had to move the game to Overton to finish it with 35 seconds left in the 3rd quarter. 1000 yard man, Alec Galvin ran for 119 yards and 2 scores as Burwell won the bizarre game 27-20.

*Ravenna can GRIND it out, baby: In the game I witnessed, Mark Hudson stuck to the

ground and turned the tide in the second half with a steady 18 play, 7:19 second drive that began on the Bluejay 5 yard line following a Lucas Wilke interception that stalled a Doniphan-Trumbull drive. Ravenna went on to rush for 251 yards and defeat the scrappy Cardinals 20-14. Pounding fullback Ethan Schamback (205 pounds) led the way with 112-16 carries.

*Watch out for Elkhorn in Class B: Mark Wortman is one of the finest coaches in the state and always has the numbers that can wear you into the ground. I remember the days when Wortman alternated entire offensive units on every other possession. When his team ran onto the field it looked like a college team with their numbers. The Antlers have a splendid back in Graham Nabity, who gained 190 yards and scored on runs of 19-8-2 and 38 yards Friday as his team bested Waverly 29-14. Elkhorn has a stiff test at Blair this week.

*Adams Central's next RB star: It appears to be electric junior Jake Fowler. This kid is full of energy and loves to play the game and demonstrated that against Sidney to the tune of 209 yards on 17 attempts and 4 touchdowns. Fowler found the end zone of runs of 18, 8, 83 and hauled in a 54 yard TD pass. Fowler started on the Patriot basketball team as a sophomore too.

*Ogallala is the Best-of-The West in C-1: No doubt about that one with QB Jared Folchert and a small, but slippery runner in 1000 yarder John Jeffers. The Indians pummeled Cozad 49-8 in their opener as Folchert hit on 10 of 11 passes for 239 yards and 3 scores. Could be another unbeaten regular season for Ogallala in 2011. Now all they have to prove is that they can hang with the Norfolk Catholics and Pierces of the C-1 world.