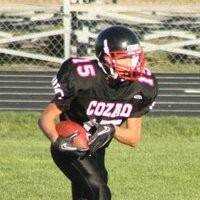 Swift Cozad sophomore sprint sensation Jake Paulsen cracked the Rivals list in an article published by Rivals.Com writer Steven Spiewak last week. Paulsen, who clocked :10.6 in the 100 meters last spring was even mentioned in an excerpt in the article......

"While traditional talent-producing states like Florida, Georgia, Texas and California are well represented on the list, America's Heartland also boasts some recruits keep an eye on, such as 6-6, 250 pound offensive lineman Braden Smith of South (Olathe, Jan) and Cozad (Nebr) speedster, Jake Paulsen, who was clocked at :10.6 in the 100 meter dash as a freshman."

If the Haymakers can come up with an offensive line this Fall, Paulsen should shine. As an 8th grade player he scored an amazing 27 touchdowns when I stopped counting and there was at least one or two games remaining. Head football coach Ron Bubak told me they do not keep stats for 8th grade football, but it seemed to me like young Paulsen scored almost every third time he touched the ball.

The Haymakers are in the area September 2nd as they take on Centura in Cairo.