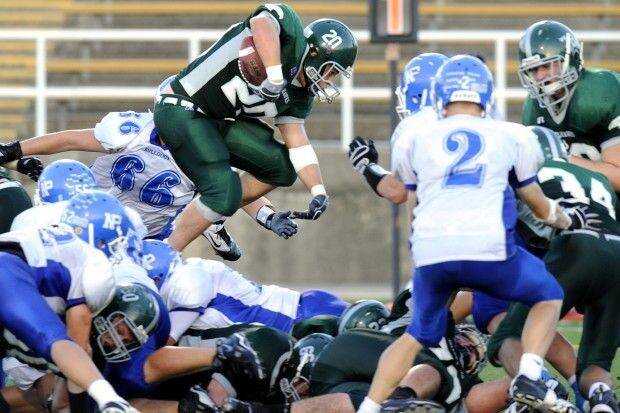 (Part one in a series of three articles)

27 running backs who eclipsed the 1000 yard mark a year ago return this Fall to try and duplicate their feat from a year ago. Here is a list of the returnees and a capsule style look at the first 9 runners. The next 9 will appear on Tuesday and the final 9 on Wednesday.

*Trent Mastny-Howells - 2,097 Yards - The 6-0, 205 pound bruiser is just one in a long line of 1000 yard runners from the mighty Howells program which has won 9 of the last 11 eight man state titles. Mastny has the luxury of running behind all-state lineman Nathan Bazada (6-3, 250) and Brian Bayer (6-5, 220) when the Bobcats run their patented sweep. I realize it's a pretty bold prediction, but there is no reason to believe that Mastny cannot duplicate his 2000 yard season in 2010 plus some.

*Troy McCuiston-Newman Grove - 1,703 Yards - This quarterback is going to make 2011 a season to remember for the simple fact it will be Newman Grove's final season before joining forces with Boone Central in 2012. McCuiston is lightening fast as evidenced by his 2nd place finishes in the Class 100 and 200 at the State Track Meet in May. McCuiston is a big kid who can also throw the ball to the tune of 580 yards in 2010 and 680 his sophomore season. Bill Mimick's Bluejays always play tough, sound, fundamental football so expect a huge season from the fleet McCuiston this Fall.

*Jed Fenske-Sargent - 1,552 yards - Fenske has been playing since he was a freshman and the 5-9, 165 pounder plays like he is 6-2, 190. Fenske has gained 2,706 yards in his 3 year career and is a vicious tackler on defense. There are not too many 8-man football men sharper than Bulldog head man, Mike Kozeal, who was a 2-year thousand yard rusher for Sargent in his day. The Bulldogs would love to have another shot at Howells and Fenske will be one of the keys to reaching that goal along with the excellent tutelage of Coach Kozeal.

*Garrett Kolling-Alma - 1,478 Yards - The only runner on the list that has hit the 1000 yard plateau twice. Football fever has hit the town of Alma and for good reason. This 2011 group of Cardinals may be the best since the days Monte Medlinger in 1981. Kolling has over 2,500 yards rushing in his career and arguably has the best offensive line in D-1 to blow open those holes for him. 6-3, 300 pound Kai Wolfe is a returning all-stater and is part of an interior line that averages 230 pounds a man. Lineman Ross Poysner, Layne Wright, and Jake Maly are about all you need to plow the way. Kolling and his buddies have the horse power to make some serious noise in D-1 and with another 1000 yard season Kolling can join an elite group of 3-year 1000 yard men. Watch these Cardinals!

*Trevor Cyboron-Ravenna - 1,42 Yards - Prior to his Junior season, Cyboron spent the summer learning the quarterbacking ropes form his cousin, Josh Crowell, twice an 1,800+ rusher for the Bluejays. Crowell, now an RB for Morningside College, may have been the best running QB in Ravenna history. Cyboron, a two time all-state basketball man, is not afraid of contact and with some blocking could duplicate his 2010 total and then some. It doesn't hurt to have one of the best coaches in the state in Mark Hudson either.

*Ethan Long-Cambridge - 1,390 Yards - Oh man, talk about having some steam-rollers in front of you when you carry the pig. D-1 prospect Mike Shoff (6-6, 290) and Trevor Flicker (6-2, 235) can be pretty imposing rolling around the end coming at you full speed. At 5-10, 165, Long can hide behind the bulldozers and dart free at just the right instant and it's lights out. Add the fact that transfer QB (as a soph.) Rayce Dauwen has a year under his belt as the Trojans QB, makes this backfield pretty salty and opens things up even more for Ethan Long.

*Jake Jordan-Lincoln SW - 1,345 Yards - This blockbuster burst on the scene in game one vs. Lincoln SE a year ago and never let up. Jordan runs low to the ground and carries tacklers with him, compiling an unbelievable yards-after-contact average. Mark King has a great off-season training program and Jordan is just one of the products of that system. With ace QB Tay Bender returning in that Silver Hawk backfield along with Jordan, look out Class A.

*Tyke Kozeal-Sargent - 1,319 - How would you like to have Jed Fenkse and Tyke Kozeal in the same backfield? That's 2,871 yards of rushing returning in 2011 for Sargent, baby. Kozeal is the son of head coach Mike Kozeal so you know how tough he is, plus the fact he tips the scales at around 195. Jacob Davenport's father told me that this backfield is so talented that his son Jacob, a 2,314 yard rusher for Sargent in 2005, might not even crack the starting line-up if he was still around! How impressive is that? Davenport was good.....very, very good.

*Michael Enstrom-Oakland-Craig - 1,289 Yards - This 6-0, 170 RB is the real deal. Enstrom even had 852 yards as a sophomore and knows how to run, period. Not too many years pass without OC having a 1000 yard rusher and Michael Enstrom must be pretty solid considering the brutal district the Knights compete in with the likes of Fremont Bergan and Elmwood-Murdock. OC lost a heartbreaker to Lincoln Christian 44-42 in the 1st round of the C-2 playoffs a year ago and Enstrom and the boys would love to extend that post season in 2011. Another 1000 yard campaign for this lad.