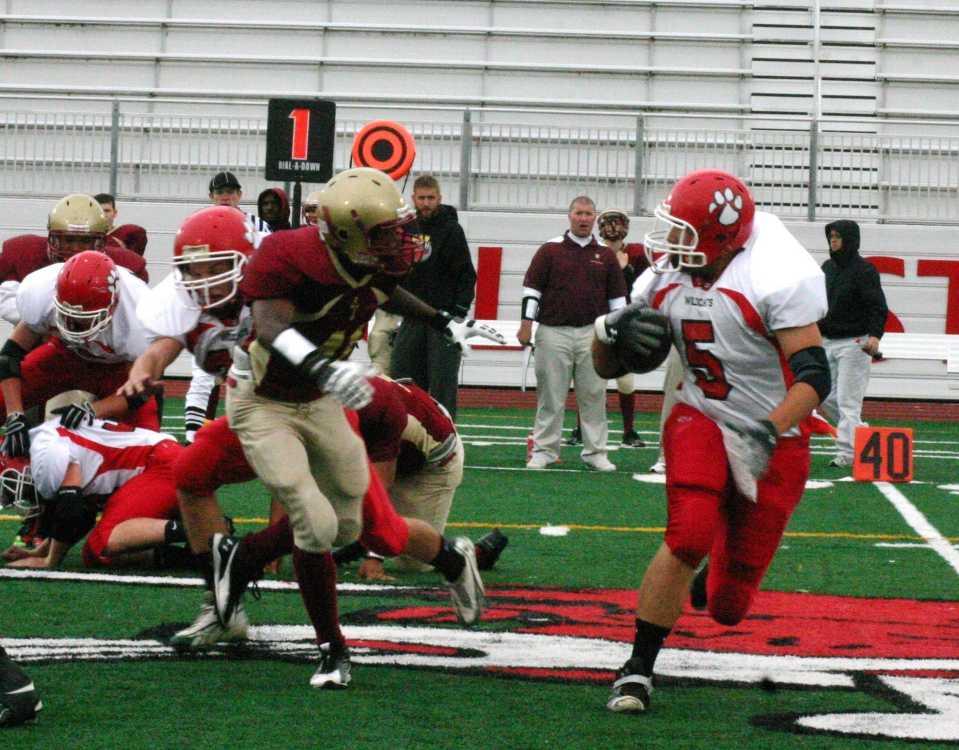 Without fail, every season after week 5 is in the books somebody cracks the magical 1000 yard rushing plateau. Three running backs have eclipsed the lofty mark, two of which you probably are familiar with and the third maybe not. 2009 thousand yard runners, Brock Sherman of Crete and Chase Wurdeman of Seward hit the list for the second straight season last Friday and a blockbusting, battering ram of a back by the name of Anthony Nelson of Winside (pictured above) is the third player to reach a grand. (and is the apparent state rushing leader)

Make yourself comfortable because we have quite a list and each week it seems to grow as runners around the state are starting to hit full throttle.

*Anthony Nelson-Winside - If you are a defender playing Winside, you'd better have the chin straps fastened for this guy. Nelson is 6 feet tall and packs 200 pounds of hard chiseled muscle. Last season, Nelson played RB behind 1000 yard rushing quarterback, Kalin Koch and still managed to score 13 touchdowns and 6 two point conversions. Last week against Randolph, he went off for 324 yards and 6 touchdowns swelling his season total to 1,119 yards. The not-so-good news for Winside...their next two opponents are Creighton and Osmond. The good news...Mr. Nelson plays at his best against top notch opponents.

*Chase Wurdeman-Seward - Seems like Seward has put up some gaudy numbers the past two weeks. Against Lexington Friday, the two teams combined for over a 1000 yards of total offense. Wurdeman ran for 212 yards on 28 carries and scored from 7, 42, 18, and 29 yards out. That raises his season total to 1,078. Seward's quarterback wasn't bad either. Sam Brauer rushed for 164-20 carries and hit pay dirt from 10 yards out. Lex QB, Tyler McKeone blitzed the Bluejay defense to the tune of 28-32 passing for 305 yards. His running mate, Patrick Berke had 177 yards on 20 tries...holy cow, hope the stat man had lots of paper.

*Brock Sherman-Crete - Unofficially ran for 140 yards, raising his season total to an unofficial 1,089. We'll check on that one for sure.

*Riley Shoemaker-GICC - Sophomore RB filling in for the injured Seth Wardyn, broke loose for 212 yards on 21 totes, including a long 97 yard TD dash. Anytime you can divide the yards gained by the number of carries and come up with double figures, you be da' man. The Crusaders blasted Centura, 42-6.

*Tyler Schnitzler-Kennesaw - Shifty sophomore quarterback and son of head coach Craig Schnitzler, burned Shelton for 140 yards on only 12 carries in a 30-12 victory.

*Richard Wynne-Creighton Prep - Took advantage of Quentin Urban's injury and rambled for 272-33 tries in the Jays wild 41-34 loss to Millard South. Wynne scored from 10, 5 and 31 yards and raised his season total to 856.

*Ethan Wright-Beatrice - Hard nosed FB made the Holdrege defense pay by breaking through for 166-21 in the Orangeman's 38-35 win. Wright scored on runs of 10 and 6 yards and caught a 28 yard TD strike from Tandon Dorn.

*Blake Headley & Nick Rasan-Millard South - Headley was deadly in the passing department by nailing 13 of 17 for 196 yards and 3 scores in the Prep win. Mr. Rasan merely recovered a fumble in the end zone with a tad over a minute to thwart a CP drive and preserve the MS win.

*Chance Younger-Bertrand - He threw a 55 yard halfback touchdown pass to Ryan Dahlgren with 53 seconds left to beat Loomis 21-18 in a battle of the unbeatens. Kalan Anderson ran for 119-16 for Loomis.

*Tannor Mroczek-Gothenburg - Speed merchant is finally healthy now and made Cozad pay. Tannor rushed for 164 yards and scored on a 9 yard pass, returned a punt for 60 yards and ran in from 53 and 5 yards away. Mroczek had over 300 yards of total offense. Cozad unleashed future 1000 yard rusher, Jake Paulsen late in the game and he ran for 106 yards and scored on a 65 yard TD dash. Paulsen has led his Haymaker 9th grade team to wins of 67-0, 64-0, and 68-0 and scored 20 of the 25 Tds. Remember the name...Jake Paulsen-Cozad...you'll be hearing it a ton in the future in football AND Track, big time.

*Jimmie Forsythe-Omaha Burke - Houdini type quarterback once again was the running demon and collected 212-30 carries in the Bulldog's exiting 28-27 overtime win over Omaha North. Jimmie boy is only 73 yards short of a thousand yards rushing now.

*Tanner Zlab & brother Foster Zlab-Wilber-Clatonia - Pestered the holy living daylights out of Lincoln Christian Friday on the Nebraska Wesleyan artificial turf. Ultra speedy junior, Tanner rushed for 160-22 carries. Little brother Foster, a sophomore QB outdid his older sibling by taking off for 195-17 carries as the Wolverines rushed for 429 yards and beat Christian 36-13. Yes, the Wolverines have the Michigan 3 stripes on their helmets!

*Zach Zobel-Elmwood-Murdock - Tossed 5 touchdown passes in an afternoon frolic at Omaha Brownell-Talbot. 3 of the TD strikes went to Matt Rorie (18, 22, 52 yards), the remaining two were nabbed by Sam Burtch (18, 46 yards). OBT star, Cody Rotert scored both of their Tds on a 9 yard run and an 88 yard kick return.

*Luke Potadle and Trevor Bryant-Tekamah-Herman - Both of these fellas missed the entire 2009 campaign and Columbus Scotus probably wishes they were still out. Potadle, who sat out last year with a blown knee, took 30 handoffs between the tackles and rambled over Scotus defenders to the tune of 200 yards and scored on 7, 3, and 58 yard runs. Bryant, who was a phenomenal All-State basketball player as a Sophomore, has used his 6-4 frame to pass for over 500 yards this season and direct the Tiger attack with precision. Who says tall basketball players can't excel on the gridiron?

*Michael Enstrom-Oakland-Craig - Enstrom knew he would play much against winless Louisville so he made the best of his very brief appearance on the field. The junior star carried the ball FOUR times, and scored on 3 of those runs covering 44, 41 and 40 yards and rushed for 171 yards....all in the first quarter. Oakland-Craig embarrassed Louisville, 71-6.

*Derek Mowinkel-Logan View - Rugged 195 senior collected 22 tackles, 9 of which were solos, in an 11-3 win over Arlington.

*Jacob Jordan-Lincoln Southwest - Scored on runs of 91 and 12 yards on his way to 228 yards on 30 totes in the Silver Hawk's 38-6 win over Fremont. 23 of Jordan's carries cam in the first half and on the opening drive of the game, he set the tone by going off for 63 yards on 8 carries.

*Dillon Loschen-Columbus - What a marvelous player! Ran for 191 yards and 4 scores in the Discoverer's 42-12 win over Lincoln High. Loschen now has 811 yards for the 2010 season. Links runner, Dagan Worton rushed for 120 yards in the loss.

*Jac Bailey-McCool Junction - Sophomore gained 162 yards on 15 tries. He also had 86 receiving yards and scored from 40 and 5 yards away and took a 56 yard INT. to the house.

*Zach Maloley-Kearney - Shocked Norfolk by taking his first carry 80 yards for a touchdown. Maloley had his finest rushing hour of the season by rambling for 205 yards in the Bearcat's 24-16 victory. He has 765 for the year on the ground. I like this guy.

*Ryen Miller and Trevor Cyboron-Ravenna - Made Kearney Catholic pay with their running antics. Miller had 132-24 and Cyboron ran for 113 yards on 17 carries in the Bluejay's 21-14 homecoming win.

*Lincoln Southeast Defense - Held Lincoln East to 78 total yards in their 51-0 trouncing of the Spartans. AND CONSIDER THE FACT THAT A STREAKER RAN THE ENTIRE 100 YARD FOOTBALL FIELD AT SEACREST THAT AFTERNOON, OUTGAINING LINCOLN EAST BY 22 YARDS, ENTERTAINING THE SHOCKED CROWD ESTIMATED AT 3,042 CHEERING FOLKS. NO, THEY DIDN'T GET HIS TIME. (The Lincoln East band was on the field at the time. I wonder if they were playing "ta da tum..ta da tum...ta da tum, tum ,tum"?)