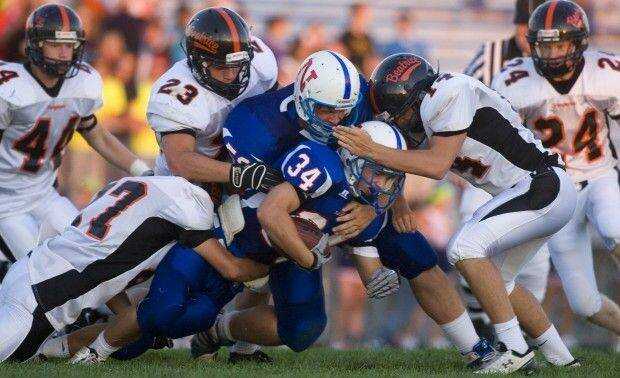 (This will be updated throughout the week, so be sure and check back for those additions)

Aurora continues to amaze me every time I watch them perform. You don't often see a team build a 34-0 halftime lead and run only ONE play from scrimmage in the second quarter. The Huskies 41-20 win over Beatrice was just another footprint on the path to a third consecutive Class B state championship trail. Yes, Tyson Broekemeier is a wizard at quarterback, but this is a team effort all the way. Coach Randy Huebert and his "all business" staff will make sure of that. No "I" in that Huskie crew.

A tip of the hat to my very good friend, Stu Pospisil of the Omaha World-Herald for unearthing a long sought after statistic. Stu dug through the endless miles of old newspaper files to find that Gale Sayers, without a doubt had a 1000 yard rushing season for Omaha Central. Many old records had inadvertently been discarded at Central years ago but Mr. Pospisil, one of the very best high school sports scribes in Nebraska, found that Sayers had run for 1,112 yards in 1960. Years back when I talked to Sayers in regard to Tom Hasse of Aurora approaching his state Long jump record, I asked him whether he knew if he ever gained a 1000 yards in a season in high school. He told me he didn't know, but the fact he was in the NFL Hall of Fame probably minimized the relevance of that question. He still ended the conversation hoping that someone would find out. Stu Pospisil, you 'da man.

And now to the Week 3 Starz:

*James Kruger-Norris -- The 5-9, 165 pound RB is pictured above fighting for yards against Beatrice. Kruger had rushed for 376 yards in three games despite his team being 1-2 and only scoring 19 points for the season. His brother Ben is the QB for the Titans. James is one tough hombre.

*Lincoln Pius X Running Backs -- The 'Bolts ran up, over, around the York Dukes last Friday to the tune of 623 ground yards. Taylor Kreifels led the balanced assault with 103 yards with TD gallops of 62 and 11 yards. Pius X punished York, 74-18.

*Zach Whitham-Millard West -- Slick junior signal caller was 15 0f 26 passing for 250 yards and 4 touchdowns in the Wildcat's 35-7 win over Lincoln SW. 3 of those scoring strikes went to Zach Kallman. The Zach to Zach connection worked for scores of 24, 9 and 14 yards, Kallman catching 6 balls for 106 big ones.

*Brady Rutt-Hastings -- Tiger quarterback escaped for 196 yards on 17 carries against Seward in a 34-26 victory. Rutt is on track to become only the second back in Hastings High history to rush for a thousand yards. The incomparable Bo Bienkowski ran for 1,692 yards in 1997. The Tigers lost to Lexington 14-7 in the Class B semifinals that season. Rutt has 542 yards in 4 games and a back must average 111/game (9 games) to be on track for a 1000 yard season in Class B. Rutt is 100 over the average at this point.

*Clayton Moore-Friend -- Rushed for 192 yards as the Bulldogs blasted unbeaten Lincoln Parkview Christian 70-26. Moore is only 5-9, 160 pounds, but possesses great vision and balance. These skills have propelled him to lofty 3 game total of 601 yards in 2010. Moore and his buddies will face a stiff test Friday as they open district play at Johnson-Brock.

*Josh Papa-Schuyler -- Quarterback punished Elkhorn South by rambling for 212 yards on 27 carries as the Warriors won 17-6. Papa picked an Elkhorn South pass and returned it 15 yards for a score and set a Schuyler career interception record in the process. He has pirated 18 so far in his career at Schuyler.

*Trevor Cyboron-Ravenna -- Junior QB scored all 3 Ravenna touchdowns in the 'Jay's 24-7 win over Twin River. Cyboron scored from long distance on jaunts of 51, 40 and 24 yards out.

*Dwight Hanzel-Humphrey Public -- Had a monster evening in the Bulldogs 36-20 win over highly regarded Newman Grove. The quarterback rushed for 203 yards on 34 carries, scoring on runs of 11, 3, and 22 yards. For good measure, he completed 10 of 19 passes for 108 yards and 2 more scores. Hanzel is one sterling football player in a town where St. Francis grabs most of the headlines.

*Greg Millikan-Wahoo -- The future 1000 yard rusher ran for 3 first quarter scores, then proceeded to go off for 192 yards on 16 carries as Wahoo eased past Raymond Central, 76-0.

*Nathan Kreikemeyer-Logan View -- Had a 140 yards on only 9 carries in a 37-8 win over Conestoga. Kreikemeyer also had 14 tackles in the game and had just returned to the playing field after missing the Pierce game with a concussion. Kreikemeyer will have to earn his yards this season as the Raiders face a murderous schedule.

*Daniel Barr-Southern -- High stepped for 178 yards on 16 carries in a 47-6 win over Johnson County Central, increasing his early season total to 345. Things are perfect in Wymore this season as the Raiders improved to 3-0. Pretty sweet for a team that had dropped 17 straight going into 2010. Very balanced rushing attack with Barr, Caleb Bedner, and QB, Tyler Shalla.