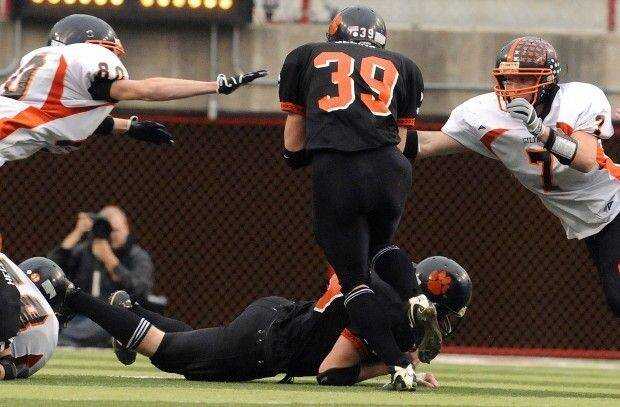 Not too many things come as a shock to most people this day and age including myself, but today when I finally had the opportunity to spend a little time with Drew Ott.......I was mildly stunned.

I heard about this tall, lanky 8th grade kid from the land of the Hornets a few years back and put him down on my list to watch the following season. Something told me he was probably going to be a varsity starter on defense as a Freshman. So in 2008 a few coaches from around the central Nebraska area informed me I had best make the short jaunt to see how well this Ott lad was coming along. Head coach Jeff Ashby had just moved young Ott from D-End to linebacker for the Franklin game which resulted in Giltner's only regular season loss in that season, but trust me, it was an excellent move. I made the trip the very next week and watched Drew Ott make 15 unassisted tackles from his new LB slot against a physically bigger and stronger, run oriented Kenesaw team. Standing 6-4 and weighing 185 pounds, Ott looked and played well beyond his age. The kid probably didn't even have a driver's license yet and was meeting 200 lb. Running backs head on and driving them into the Giltner turf.

Two things about Drew Ott impressed me that night. Despite being just a freshman, he had great vision and made swift, intelligent reads from his new position. The first thought that popped into my mind that night was that he reminded me of one of my favorite high players from Kearney high school....Noah Keller. Now, Mr. Keller had about the best lateral movement I had seen a high school linebacker possess in years. He covered sideline to sideline about as good as they come. As I watched Ott that night, thoughts of a young Noah Keller flashed though my mind. At the moment Ohio University's Keller may be the finest linebacker in the Mid-America Conference and is receiving some All-American pre-season mention.

So now the shock I spoke of earlier. When I met Mr. Ott this afternoon, he was 20 pounds heavier than a year ago, and it was well chiseled muscle. Up to a rock hard 220 at the present time, Drew told me he was inspired to hit the weight room by his uncle, Don Ott. Neat thing about the elder Ott is that he insisted that the all-state linebacker hit the weight room from day one and practiced what he preached by lifting with Drew on most days......at the age of 41. Now that's some dedication and "rock" solid advice. The encouragement must have worked because the younger Ott has increased his squat by around 40 pounds...doing it the right way. I have to think this Junior from Giltner is pretty bright to have the smarts to know his body is in a maturing spurt and to jump start that spurt with hard work in the weight room. Now for a little bit of math. Ott logged a ton of tackles as freshman...154 to be exact. He increased that total to 211 in 2009....yes, he led the state in D-1 if you were wondering. So what will that added muscle and increased speed he's been working on translate to in 2010? Let me put this this way, I would not like to be lined up in the backfield and have my number called on an iso with him staring daggers at me across the line of scrimmage.

Jeff Ashby stated earlier in the summer that Drew Ott is one the best players he has coached in a couple of decades. In my estimation he is the best I've seen at Giltner since the 1984 State Championship squad and trust me, they had some pretty vicious defenders like Les and Rex Cates roaming the defense. Ott grew up in Trumbull as a child so he really never had an idol from Giltner high although he respected Jordan Eastman for his toughness. He also complimented Husker Adam Ickes, the former 8-Man star from Orchard. Something tells me Mr. Ott may have his sights set on playing for Nebraska if the opportunity comes along.

When I asked him what the most important thing for a linebacker in high school to possess, he simply stated , "speed". In this streamlined age of football, speed is the one of the keys, no doubt about it and Drew Ott is working on it every day. The final question to him was this: "What is the one thing you feel would make you a better defensive player?" His answer: "Get lower when making a tackle". Now you can hardly blame a player that is 6 feet, 4 inches tall for just meeting shorter players straight on and physically forcing them to the ground. Natural tendency when you're that height, but I have a feeling Ott's going to get this one mastered and become more efficient than he already is right now.

Number 7 for Giltner credits gaining most of his football knowledge from coach Jeff Ashby. Ashby's a smart football man, period. He challenges Ott every practice on defensive reads from that linebacker position. The stocky former Giltner football player gets right in there and tries to beat Ott to the hole and get to the ball carrier. All I can say is Ashby must be pretty sharp because Drew Ott has possessed great vision from day one and rarely gets fooled on a play. Guess that makes this player/coach combination down right efficient and the stat books and record books back it up.

The season gets underway for the Hornets this Friday when they trek to Shelby. The beginning of a journey Drew Ott hopes will take them back to Memorial Stadium in Lincoln on November 22nd about 10:15 in the morning to be exact. The kid is wise enough to know that in the post "Nate Most" era, they have to take 'em one at a time, but Ott feels this year's team has a close knit bonding that could take them places. You know that kind of "we know each other's moves and what our assignments are" type of thing. With RB Derek Eastman slimming down to a buck 90 and the elusive, Sean Findley taking over the quarterback slot, the Hornets could be better than last season which is a scary thought. Ott's classmate, Trevor Poppen and Logan Rath should also make this a year to remember for Giltner football.

One subject that never came up with Drew Ott today was Howells. The Bobcats are probably in the back of his mind, but the prospect of meeting them again in the post season is too far off for this experienced player to think about, I'm sure. I admire his "take 'em one at a time" thinking. Another thing we touched on just briefly was offense. It would be foolish to think Ott would be silent when Giltner has the ball. If nothing else, I have a sneaking suspicion he would like to catch passes for the sole purpose of making some contact with a defender, but I'm also betting scoring a few touchdowns is also in the back of his mind. Giltner has had some 1000 yard receivers the past two seasons....need I say more?

So after this little meeting this afternoon, I came up this these conclusions: Drew Ott is going to make lots of tackles, Drew Ott is going to score some touchdowns, Drew Ott will cover a ton of ground from sideline-to-sideline, have some fun, take some names and lead Giltner to a successful 2010 season...........and continue to build on his reputation of being "The (Friday) Night Stalker".