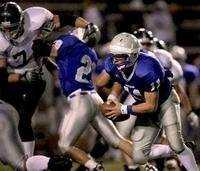 There is always some questions that have high school gridiron fans scratching their heads about when it's less than 2 weeks before the Holy Season begins. Inevitably, there are players that have earned the right to be mentioned in high regard prior to the beginning of the season, but have somehow managed to fly under the radar. How about those kids that have not had the chance to shine under the Friday night lights but have "wowed" coaches And teammates in practice? Then there are the players that show up (or not) on prospectus sheets under the colors of a new school.

I certainly cannot boast of knowing all the scoops floating around the high school practice camps thus far, but we'll take a stab at filling in some of the blanks.

*Seth Hoffman-David City Aquinas -- Only the 4th Freshman in history to rush for over 1000 yards (1,147), the 195 lb. sophomore has decided to give 11-Man football a try this season. The former Shelby Huskie has been running at fullback thus far for Ron Mimick, but there is talk of moving him to the line. If he does play in the backfield, he will join another 1000 yard runner in Nate Roh (1,270).

*Kaleb Kluender-GICC -- (rhymes with thunder) moved with his family to Grand Island from Valentine, where he started at QB the past 2 seasons. Passed for 905 and rushed for 699 last year, and threw for 1,370 yards as a Sophomore. Joins potential 1000 yarder, Seth Wardyn and Grand Island Northwest transfer Patrick Schulenburg (WR) in an explosive backfield that also includes the outstanding 200 lb FB/LB, Garrett "Doc" Coble.

*Barfield Brothers-Omaha Central -- These guys were pretty salty track athletes at Bellevue West and are both only Juniors. Dennis Barfield (5-11,170) was an all district WR/DB as a Sophomore in '09. Super coach Jay Ball and his Eagles just got a little better with the addition of these two.

*Anthony Ridder-West Point C.C. -- This 6-1, 195 quarterback was good in C-2 last season so we'll know what to expect in D-1 in the up coming year. His dad, Dave Ridder is the head coach and comes from one of the most well known athletic families in the state. Dave started for Nebraska in the mid-80's and always fashions a tough team year in and year out at WPCC. The Bluejays should fit well in the 8-man ranks and will find out right out of the chute when they face the mighty Howells in their season opener. Ridder, RB/LB Cody Stalp and safety Nathan Bruning will make this WPCC bunch tough. A friendly district with Omaha Concordia, first year Omaha St, Peter Claver, Lyons-Decatur NE, Scribner-Snyder, and Omaha Christian will help.

*Creighton -- This crew also drops down to 8-Man 1 from 11-Man's C-2 ranks. Good heavens, head coach Jeff Jensen has led this team to 8 straight 11-Man playoff appearances and has a 10 year record of 75-30 at Creighton. They even advanced to the quarterfinals in C-1 in 2005, blasting Pierce 35-10 along the way. Creighton advanced all the way to the C-2 finals in 2002 losing to Lawrence-Nelson and have won at least one playoff game in 7 of the 8 years they have made the post season. Last season they made it to the quarterfinals again and in 2010, QB Ryan Mitteis, RB/LB Derek Tyler, and lineman Jordan Morrill will have a "ton of fun in D-1".

*Hyannis and Bryan Ferguson -- The drop to 6-man will be frightening for opponents who have to face the durable Fergsuon, who ran for 1,707 yards and carried 37 times a game in '09. If the Longhorns catch on to the 6-Man game, Bryan Ferguson could re-write some pages in the record books.

*Southwest -- Another team dropping into the 8-Man wars and former Burwell star, Les Roggencamp and his Roughriders look like they will be able to compete in what should turn out to be a tough District. 1000 yard rusher, Justin Malleck (1,070), Thomas Sughroue (6-0, 215 RB/LB) and lineman Sam Osterman will spearhead the charge.

*Hastings St. Cecilia -- No, the Bluehawks are not dropping to 8-Man, but they will go from C-1 to C-2 and even with the loss of an entire backfield, Carl Tesmer's forces will be favorites to capture the Title in C-2. I have a feeling, this current team may have been able to win the C-1 crown had they stayed there. I saw their reserves play twice last season and believe me, they are going to step right in and not miss a step. Will not hurt to have Nebraska recruit Zach Sterup around either.

*Will Freddy Petito's Millard North running juggernaut be able to win a Class A crown doing just (and almost exclusively) that?

*How far can Millard South advance with a new Quarterback......and will that man be All-Stater Quentin Urban?

*How many passes will St. Cecilia's Zach Sterup deflect before the season comes to a close in 2010? Better yet, who is good enough to keep him away from their quarterback?

*Will it be a 3-Peat for the Aurora Huskies in Class B? Never happened before, but hold on, the Huskies will be salty.

*Is it possible for Blair's outstanding Ryan Randall to win another State Rushing Crown?

*Can Omaha Burke's master of trickery signal caller Jimmie Forsythe lead his team to the promised land and earn himself a D-1 scholarship all in the same season?

*Will the 8-Man ranks be the same without former Lawrence-Nelson head coach, Gary DeBoer? (No he couldn't hang it up, he is an assistant at Norris for 2010).

*Will Potter-Dix standout, Ty Ottoson be able to pull off the impossible and be a 1000 yard receiver, 1000 yard rusher, and 1000 yard passer before he graduates? He already has the receiver part in the bag and moves to QB for his upcoming junior season. (yes, he can run and his older brother showed him a little about slinging the ball!)

*Will former Stanton coach Greg Hansen be able to overcome some ghosts of the past and get the 35 game losing streak monkey off Centura's back?

*Will a Lincoln school in Class A have the talent to make a deep playoff run in 2010? Only 3 have made it to the Finals since 2000 and Southwest is the last in 2005. A week from Thursday the SW/SW game may clear the picture a little.

*Will the underclassman from the new kid on the block, Elkhorn South be able to post a win in season one? How about another newbie, Omaha St. Peter Claver?

*How long will it be before every playing surface in Class A is artificial?

*How cool will it be to be on the sidelines when Creighton Prep plays Omaha Central at Rosenblatt Stadium October 8th? I can only imagine in my dreams, but I will guarantee this....... I'll be there!

*and finally......what will Creighton Prep's Tom "Jaws" Jaworski do next season when August rolls around? Who will take over that revered coaching slot?

In tomorrow's article, we'll showcase some of those players that could be making football headlines this season whose names may not be in the "household" category just yet. Stay tuned....the 2010 season is so close we can almost reach out and grab it