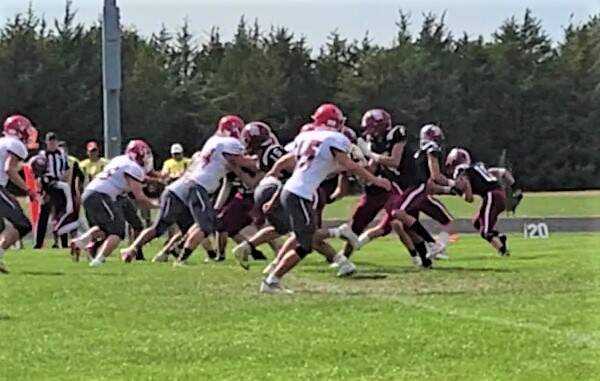 The hard running senior also caught a 62 yard touchdown pass from sophomore QB Jakob Ruhl, then in turn, completed a 3 yard pass to Jakob Ruhl, and made 2 tackles on defense with one pass breakup.

At the end of the night in David City Park Stadium, Morris compiled 330 All-Purpose Yards. For the year (5 games), Quentin Morris has rushed for 699 yards and 9 touchdowns for the 3-2 Centurions.

One thing I can tell you is that Centura’s #11 is a Baller.

*Aiden Kuester-Neligh-Oakdale - The record setting Warriors QB completed 10 of 15 passes for 234 yards and 3 touchdowns and rushed 22 times for 237 yards and another SEVEN TDs in Neligh-Oakdale’s 90-56 win over then 3-1 Plainview.

BUT, the NSAA records list the 8-Man TOTAL OFFENSE record of 10,675 yards being held by Brandon Holtorf of Prague, who played during a 1998-2001 span.

That appears to be in error because Holtorf played TWO YEARS of 6-Man and TWO YEARS of 8-MAN FOOTBALL during his 4 year career at Prague. That 10,675 yards of Total Offense was spread out over 2 different classes.

*Leighton Weber, Jaxon Gangwish-Adams Central - These two magnificent defensive players for the Patriots had 27 tackles between them in that 30-27 win over Central City. Weber, who is one of the best linemen I’ve seen this season, made 12 tackles, had 3 tackles for losses, 2 sacks and that incredible pass deflection in the end zone late in the 4th quarter.

#55 Jaxon Gangwish had 15 stops, including 9 solos and one TFL. Gangwish actually finished the game playing in the A/C Offensive line due to an injury.

This Adams Central club has Dudes all over the place.

*Fillmore Central Defense - Picked off FIVE Fairbury passes in the Panthers 47-13 win. Dylan Gewecke had 2 of the 5 INTs, while Jarin Tweedy, Kane Cooper and Jayde Wolf all had one pick each. Wolf also recovered a fumble.

Luke Kimbrough also blocked a punt, junior Jackson Turner made 7 tackles and returned a fumble for a TD in the game.

Now, that Fillmore Central offense was nothing to sneeze at, exploding for 34 points in the second quarter. Junior QB Treven Stassines led the offense with 93 yards passing and 3 scores plus 106 yards rushing with another touchdown.

How about this Fillmore Central football team who sports a 4-1 record right now and is 7th in the current NSAA Class C-2 wild card standings. The Panthers have 1-4 Doniphan-Trumbull, 0-5 GICC, 5-0 Hastings St. Cecilia and 4-1 Wood River left to play on the regular season schedule.

*Jack Wemhoff-Elgin Public/Pope John - Had 68 yards and 3 touchdowns on just 7 carries and caught 2 passes for another 86 yards with another TD. Wemhoff’s Career Rushing Yardage total now sits at 3,823 yards with Ainsworth, Niobrara-Verdigre and O’Neill St. Marys left on the regular season schedule.

Wemhoff should get some serious carries in the Ainsworth and St. Marys games and with the Wolfpack poised to make a deep Class D-2 playoff run, Jack should have a legit shot at the coveted 5000.

*Matt Bohy-Lincoln Pius X - Bulldozing 200 pound Thunderbolt RB rushed for 161 yards on 15 carries with three touchdowns in the ‘Bolts 41-12 win over Crete. Two of those were long distance runs to the house, coming from 60 and 44 yards out.

*Jackson Hinrichs-Holdrege - Duskers QB couldn’t get the passing game going in a 35-14 loss to Minden, so he turned to the ground game where he bolted for 203 yards on 19 carries with both Duster touchdowns. Jackson Hinrichs accounted for 85% of the Holdrege offense in this game.

*Tanner Frahm-Plainview - in a 90 to 56 loss to Neligh-Oakdale, Frahm hit 39 of 54 passes for 454 yards and SIX TDs. Tanner also rushed 32 times for 92 yards and another pair of scores, accounting for 533 yards of total offense. He also made 11 tackles on defense.

And the kicker is……The dude has compiled these gaudy numbers despite his team going 4-15 during his 3 years as starting QB.

*Jake Watson, Jhared Alverez, Luke Penrod-Lincoln Christian - Can you say Thee Backs over 100 yards? That’s exactly what the Crusaders had in their 62-26 over Nebraska City. Watson rolled for a buck 37 on on 14 carries with 3 TDs, Jhared Alverez was not far in Watson’s rear view with 133 yards on 19 totes with a 19 yard TD run, and Luke Penrod was number three with 103 yards on 4 touches with a 70 yard touchdown run in there.

The Crusaders ran 54 plays in the same, of which 52 were rushing attempts for a whopping 529 yards. The dude of this bunch is 5-10, 185 pound senior, Jhared Alverez. The Lincoln Christian standout also a menace from his linebacker, making 8 tackles in this game with two definitive QB sacks.

Jhared Alverez now has 564 yards rushing (7 TDs) and 45 tackles on defense. It appears that this kid played for the Crusaders as a freshman, then either transferred or did not go out because there are no sophomore or junior stats.

Regardless, this young man is a Baller.

*Cody Galles-Hemingford - Sophomore runner rushed 17 times for 145 yards and a 42 yard touchdown gallop in the Bobcat’s 64-28 loss to Maxwell. Why is this a big deal? Cody Galles has gained 556 yards in 5 games for an 0-5 football team.

Johnson-Brock has a huge home matchup with BDS Thursday night.

*Quinton Heineman-Pender - Ran 9 times for 159 yards and 3 touchdowns, caught 3 passes for 103 yards, with 2 going for TDs, and made 4 stops on defense in the Pendragon's 68-22 thrashing of West Point GACC.

Heineman now has 549 yards rushing with 13 TDs and 449 receiving yards with an additional 8 touchdowns and 40 tackles (26 solos) on defense. Stud.

*Gatlin Reimers-Palmer - The sophomore QB completed 12 of 20 passes for 127 yards and a score in the Tigers 14-12 win over Fullerton. Reimers also rushed 20 times for 128 yards and the other Palmer score.

For the season thus far, Gatlin Reimers has 417 yards passing and 566 rushing for a 2-3 football team.

*Aiden Norman-Fullerton - In that loss to Palmer, Norman rambled for 155 yards on 25 carries and scored both TDs. He also had 6 unassisted tackles during the game.