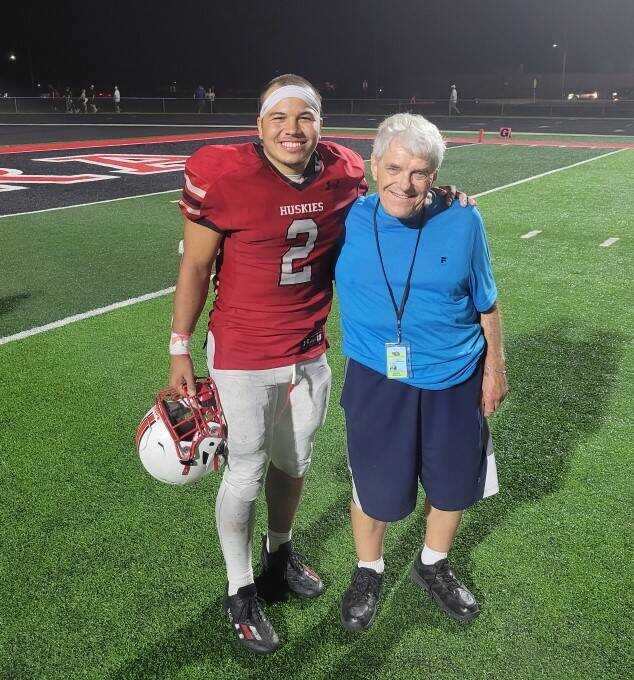 *Carlos Collazo-Aurora - 5-10, 200 pound All-State RB rushed for three touchdowns and threw for another in the Huskies season-opening 43-13 romp over longtime rival Grand Island Northwest. Collazo, who bolted for 2,022 yard in 2021, scored from 39, 17 and 2 yard away and shocked Northwest by pulling up on a sweep and lofting a 69 yard TD pass to speedy Caleb Nachtigal.

*Danny Kaelin-Bellevue West - Divison One recruit junior quarterback has been a model of consistency in the Thunderbirds first two victories of 2022. In Bell. West’s 28-21 win over Creighton Prep in Week Zero, Danny completed 22 of 34 passes for 269 yards, accounting for all 4 touchdowns. Four different receivers were on the receiving end of those scoring passes (Isaiah McMorris, DaeVonn Hall, Gio Contraras and Kyrell Jordan)

In last Friday’s 28-26 win over Omaha North, Kaelin completed the exact same 22 of 34 passes, but this time for 255 yards and a pair of scoring tosses to Isaiah McMorris.

Kaelin now has 524 yards and 6 touchdowns through 2 games. The T-Birds host Kearney this Thursday

*Cade Hosier-Elmwood-Murdock - Ran for 317 yards and 6 touchdowns on just 14 carries in the Knights' shocking 95-44 win over legendary 8-Man program, Falls City Sacred Heart. Hosier, a Track & Field sensation who ran for 1,626 yards and 19 TDs a year ago, averaged 22.6 yards a pop with two of his scoring jaunts coming from 71 and 73 yards out.

*Cam Kozeal-Millard South - The Vanderbilt baseball pitching recruit is pretty salty on the gridiron as well. In the Patriot’s 38-14 win over Millard West, Kozeal completed 22 of 34 passes for 300 yards and 3 touchdowns. Two of Cam’s scoring passes went to Gavin Nunnally in the opening quarter covering 7 and 12 yards. His 3rd TD pass, covering 10 yards, was hauled in by Austin Trotter with 4:24 left in the 3rd quarter. That score gave Millard South a 31-7 cushion at the time.

*Alex Noyd, Isaac Dickey, Jackson Lindberg, Toby Waller-Cross County - These were just 4 of the standouts in Cross County’s huge 44-24 victory over powerhouse Sutton. After falling behind 16-0 to Mustangs, new head coach Matt Carroll’s Cougars then out scored Sutton 44-8 the remainder of the way to knock out the D-1, pre-season #2 Sutton.

Strongmen Isaac Dickey and 2021 All-Stater Alex Noyd led the defensive charge with 17 and 15 tackles respectively. Jackson Lindburg led the Cross County ground attack with 97 yards on 10 carries with touchdowns covering 6 and 31 yards. Waller was not far behind with 80 yards on just 6 carries and a pair of TD’s covering 1 and 8 yards.

I could just hear the Cougars whispering under their collective breaths “Welcome to 8-Man football, Sutton Mustangs.”

*Anthony Rezac, Jalen Lloyd, Caleb Benning-Omaha Westside - In the Warriors 24-17 win over rival Creighton Prep, Quarterback Anthony Rezac not only completed 7 of 9 passes for 176 yards with scoring strikes to Jalen Lloyd (34 yards) and All-Stater Caleb Benning (47 yards), but was nearly as effective running the ball, going off for 124 yards on 19 totes.

The victory over the Junior Jays gave new head coach Paul Limongi his first win as an Omaha Westside coach.

*Jace Chrisman-Grand Island - Senior leader sparked a furious second half comeback victory in the Islanders 20-19 win at North Platte. Chrisman scored all three GI touchdowns in the second half to propel the Islanders to the win. Chrisman’s TD dashes came from 17, 49 and 33 yards away, a part of his 137 yards on 10 carries during the game.

*Carter Ruse-Freeman - Standout All-State basketball guy can play a little football as well. In the Falcons 48-20 win over traditional power Nebraska City Lourdes, Ruse rushed 20 times for 140 yards and a pair of touchdowns covering 5 and 12 yards. The 6-0, 180 pound senior star also completed 6 of 9 passes for 108 and 3 more touchdowns.

Carter Niles was on the receiving end of two of those scoring passes (35, 32 yards. RB Gabe Goes hauled in the third on a 23 yard reception. Brandon Jurgens also hit paydirt on a sparkling 51 yard punt return where he fielded the punt, veered to his right, then simply outran the return coverage.

Niles and Mason Denzin led the defense with 6 solo tackles each.

Henry Raemakers-Columbus Scotus - Good looking sophomore runner rambled for 99 yards on 25 touches and tallied both Scotus touchdowns (2, 4 runs) in the ‘Rocks 13-7 win over longtime rival David City Aquinas. Veteran Quarterback Trenton Cielocha was right behind with 98 yards onb 16 totes as Scotus opens with what looks to be a successful 2002 campaign.

*Conner Brown-Ralston - Sophomore running back scooted for 173 yards on just 12 carries with touchdown runs of 4, 3, 41 and 78 yards in the Rams 43-12 victory over Lincoln Northwest. Northwest, with no seniors, was playing it’s first football game in the history of the school, which just recently opened this August.

*Deegan Nelson-Beatrice - Was a standout in the Orangemen’s 41-7 loss to Omaha Gross with his 166 yards on 25 carries and the only touchdown. Nels.on, if you recall, rushed for 945 yards as a sophomore and 1,097 a year ago.

*Randall Gronenthal-Humphrey/LHF - Accounted for EVERY SINGLE point in the Bulldogs season opening 32-16 win over Niobrara-Verdigre. Gronenthal rushed for 200 yards on 16 carries, scored all FIVE touchdowns and ran for one 2 point conversion.

*Jax Biehl-Fairbury - The 6-1, 190 pound senior quarterback was a shining star in the Jeffs 35-0 win over Tri-County. All Biehl did was complete 17 of 29 passes for 328 yards and 5 touchdowns in the season opener.

The 328 yards surpassed Biehl’s entire 2021 season passing yardage total by 126 yards. Jackson Martin, who led all Jeffs receivers with 6 catches for 159 yards, caught one TD pass. James Olds (5 receptions/115 yards) caught 2 of Biehl’s scoring tosses, while Conner Gerth and Riley Garner each hauled in one TD reception each in the Week One victory.

*Wiley Ziegler-Bloomfield - 5-9, 145 pound junior back escaped for 172 yards on just 11 carries with 4 touchdowns in the Bees 52-16 win over Winside. Boloomfield’s “D” held Winside to just 6 yards rushing and 124 yards through the air in the route.