Aurora unleashes the Fury against Seward to claim District 4 Title. 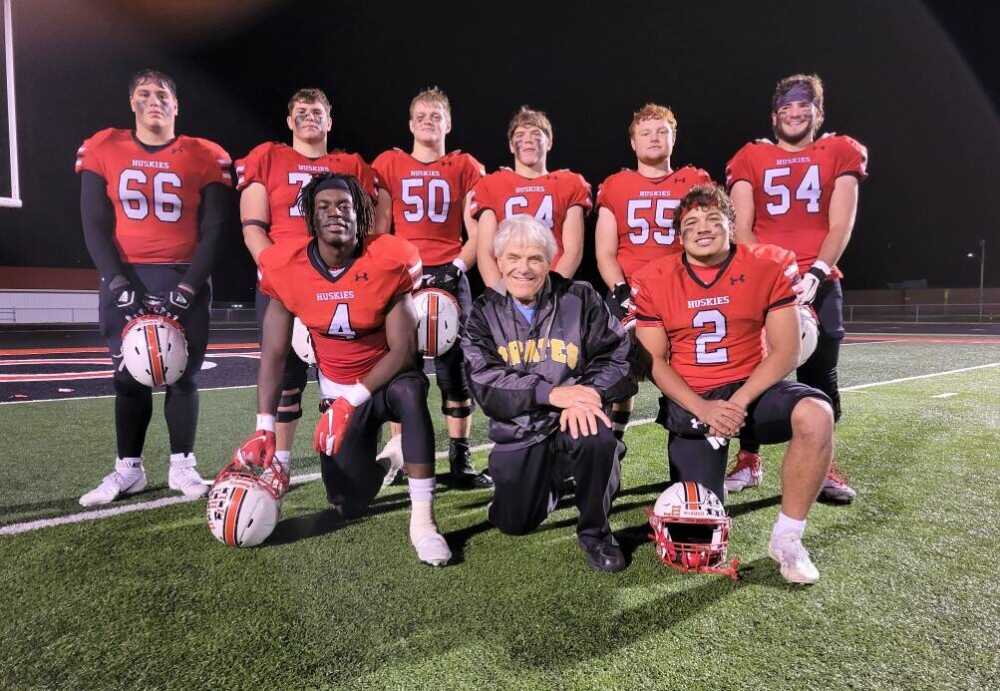 This is the outstanding Aurora O-Line with All-Staters Mack Owens and Carlos Collazo in the front row. Both Owens (last year) and Collazo (this season) are 1000 yard rushers.

Halloween is still 9 days away but Seward had to feel like Aurora unleashed the demons a week early as the Huskies scored early and often to turn the Class B, District 4 championship game into a one-sided affair.

Some injuries to a few Seward players, a stiff first quarter breeze and a surging Aurora football team led to a 50-8 halftime deficit for the Bluejays, and eventually a resounding 50-14 victory for the Huskies.

Things seemed to go wrong from the get-go for Seward, who entered the contest 7-1 and ranked #4 in the Class B wildcard standings.

So, those demons we spoke of earlier? The first one had nothing to do with the Huskies. Instead it was Mother Nature suddenly delivering a fairly stiff breeze right in the faces of Bluejays about 40 minutes prior to kickoff to end what had been a nearly windless, warm late afternoon, early evening.

The second demon came in the form of a ferocious Aurora pass rush that was there from minute one. All-State quarterback candidate Gavin Sukup did actually complete a long pass play on the second play from scrimmage (from the 20), but a holding call brought the ball all the way back to the Bluejay 9.

The very next play, the Huskies brought that heavy pass rush, Sukup had the ball stripped and Aurora pounced on it at the 8 yard line.

One play later, Carlos Collazo was waltzing his way into the endzone from 8 yards out. QB Drew Knust found a receiver for the double PAT and Aurora was up 8-0 thirty three seconds deep into the game.

Aurora would add another score with 5:38 left in the first, driving 63 yards in 8 plays before two-time All-Stater Mack Owens scooted around his left end for a 15 yard touchdown.

Demon #1, the stiff breeze, reared its ugly head and bit Seward 25 seconds after Owens touchdown run. Gavin Sukup, who puts plenty of mustard on his throws, had one held up by the wind, his intended receiver tipped the ball high in the air and Britton Kemling was right there to snare it and turn it into a 15 yard Pick 6.

Seward finally had the wind at it’s back to begin the 2nd quarter and had their first break of the night when their punter pinned the Huskies back on their own 6 yard line with a booming 47 yard punt.

Seemingly unphased by the poor field position, the Huskies gave Seward a steady dose of Carlos Collazo, who ripped off gains of 9, 20, 3, 7, 10, 2 and finally a 19 yard scoring dash to complete the 94 yard drive. The amazing Collazo gained 70 of the 94 yards on those 7 touches.

The Huskies had a 29-0 lead 7 ticks deep into quarter number two and were not finished.

Just one play after Collazo’s 19 yard scoring run, Aurora senior Bryce Barger picked off a Sukup pass at the Seward 39 and the Huskies were in business yet again.

Seward finally got on the board when the fireballing Sukup nailed Micah Hackbart for a 50 yard gain, stretching from the Bluejays 34 yard line all the way to the Aurora 16. Four plays later Sukup plunged in from a yard out, hit Hackbart for the two point conversion and it was 36-8.

Aurora answered with a 68 yard drive, Britton Kemling putting the stamp on that one with a 4 yard touchdown run. Demon #4, the fumble bug, then struck Seward when a Huskie defender jarred the ball loose after a pass reception, setting up another scoring opportunity for the red hot Huskies.

Aurora turned the Seward mistake into points when Drew Knust hit Preston Ramaekers for an 8 yard TD strike. Peters once again converted the PAT kick and the Huskies lead was up to 50-8 at the halftime break.

The entire 2nd half was played with a running clock and Aurora played only reserves on offense during this entire remaining 24 minutes.

Seward would add one final tally in the 4th quarter when Sukup hit Luke Wegman on a slick crossing pattern.

Unofficially, Carlos Collazo led all rushers with 168 yards on 17 carries and a pair of touchdowns. Makc Owens added 60 yards and two scores on just 7 carries while Drew Knust was rushing 5 times for 48 yards.

Drew Knust was nearly perfect in the passing department, completing 10 of 11 first half passes for 84 yards and a touchdown. Junior QB Camden Holliday matched Knust’s near perfection during the second half, hitting 6 of 7 attempts, good for 27 yards.

Unofficially, Gavin Sukup completed 8 of 16 passes on the windy evening for 126 yards and a touchdown.

The Huskies hit the postseason hitting on all cylinders. As Coach Peterson stated tonight after the victory,this team seems to be built for the postseason and judging by this performance, he may be right.

As far as Seward goes, the Bluejays have to flush this one and get ready to host an opening round playoff game. This Bluejays crew didn’t get to a 7-2 mark without doing something right and should be a factor in the upcoming Holy Season.