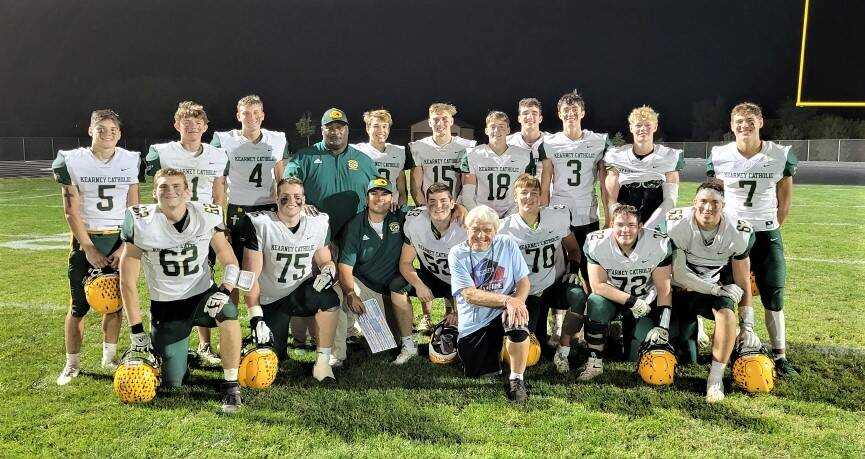 The Kearney Catholic offense was in high-gear in the win over Adams Central last Friday night.

*Riley Grieser, Brett Mahony, Dylan Merz, Stars Offensive Line - 6-1, 175 pound senior running back Riley Grieser can flat out play the game of football and that fact was in full display last Friday at Adams Central when the Stars posted a resounding 41-12 victory over a very fine Patriots team. Grieser ran for 185 yards and 3 touchdowns on 20 carries, caught a 49 yard scoring pass from the great Brett Mahony, and made 7 stops on defense. Grieser’s touchdown runs covered 2, 9 and 3 yards, all coming in the opening half. The big night elevated Grieser’s rushing yards over the thousand yard mark, setting him at 1,071 yards for the year.

Quarterback Brett Mahony completed 5 of 7 passes for 102 yards with that 49 yard TD toss to Riley Grieser included in there. And Dylan Merz, my All-Stater from a year ago, was rock solid on both sides of the ball, opening huge gaps for Grieser and recording 11 tackles on defense.

On defense, Aaron O’Brien (5 tackles/sack), Brett Mahoney and Max McBride (8 stops each), Riley Grieser and Garrett Schmaderer (7 tackles each), Schmaderer and Carson Murphy (interceptions) and Tyson Redinger with 3 tackles and a fumble recovery, were all standouts.

This is a good Kearney Catholic football team here, as good as anyone in Class C-1 that I’ve seen live, and that includes Boone Central, Columbus Scotus, Pierce, Wayne, Adams Central, Columbus Lakeview and Wahoo. Remember, this Kearney Catholic team always seems to get tougher once the playoffs begin. That’s just the way it is and this bunch is not a good draw, especially in the opening round.

*Brady Cook-Fullerton - The 5-11, 175 pound junior may have played the game of his life in the Warriors 44-36 win over Palmer. Cook, who played quarterback in place of injured freshman Fletcher Dubas, rushed for a massive 253 yards and 4 touchdowns on 27 carries, completed 11 of 16 passes for 109 yards and a score, CAUGHT a 30 yard touchdown pass and amassed 17 solo tackles on defense.

Perhaps lost in the shuffle was the fact Brady Cook surpassed the coveted 1000 yard rushing plateau in the contest, giving the All-State candidate 1,039 yards (19 TDs) in 7 games this season.

*Blake Miller-Nebraska City Lourdes - Not many better athletes in the state better than this young man, and it once again was on display in the Knights 53-6 win over Johnson County Central. Miller completed 12 of 14 passes for 185 yards and 4 touchdowns in the rout, ran 3 times for 45 yards and another score (13 run), and made 11 stops on defense. Miller’s touchdown passes were gathered in by Beau Lee (10, 17 yards), Aiden Aldana (10 yards) and Zach Tesarek (37 yards).

Joe Kearney also returned a punt 53 yards for a TD in the contest besides leading Lourdes Central Catholic in tackles with 12.

This 7-0 Lourdes team will be in the hunt for that coveted Class D-1 championship. The Knights are currently rated #4 by the Omaha World-Herald with only Burwell, Howells-Dodge and Cross County in front of them.

*Bennett Turman, Anthony Heithoft-Omaha Skutt Catholic - QB Bennett Turman, who is filling in for D1 Wyoming commit Caden Becker (injured in the September 17th Bennington loss), completed 8 of 14 passes for 122 yards and 2 TDs in the SkyHawks 56-32 triumph over Ralston. Heithoft ran for 143 yards on just 9 carries and crossed the goal line twice in the win. This Skutt team has been banged up this season, but still playing good football.

*Carson Kudlacek, Cooper Butler, Emmanuel Consbruck-Hastings St. Cecilia - Junior Carson Kudlacek completed 11 of 18 passes for 248 yards and 3 touchdowns, rushed 13 times for 109 yards and three more TDs (2, 1, 37 runs) and kicked a 37 yard field goal to put the game out of reach in a wild 50-41 win over GICC.

Consbruck led the Bluehawk defense with 8 solo stops. Coach Clint Head has done a marvelous job with this St. Cecilia football team since taking the controls.

*Ethan Christensen-Yutan - The red hot Christensen exploded for 303 yards and 5 touchdowns on 18 carries in Yutan’s 66-15 romp over Syracuse. Ethan’s TD scampers came from 55, 11, 34, 8 and 18 yards out. Talk about turning it on all of a sudden, Christensen had 257 yards rushing after the Chieftains first three games, but has since upped that number to 832 yards with games of 111 vs. Lincoln Lutheran, 161 against Wilber-Clatonia and the 303 he churned out against Syracuse.

Basketball star Cael Wichman, a pretty salty football running back too, added 82 yards on 17 carries with a pair of scoring runs of 2 yards each. 6-2, 219 pound junior TE Leo Guenther, who has played in just 5 games this Fall, led the way on defense with 9 tackles (6 solos).

This 5-2 Platteview team is a good one, led by Dual-Threat QB Kuhl, who has compiled 1,274 yards passing with 10 TDs, and rushed for another 525 yards with another 10 scores. Wichman is right behind in the rushing department with his 493 yards (4 TDs).

This Platteview defense can really get after it with their 18 sacks, 8 interceptions, 5 recovered fumbles, 2 blocked punts and a pair of blocked field goals. Guenther leads the Trojans “D” with 45 stops.

*Carter Seim, Haiden Hild, Cory Hollinger, Shayden Lundstrom-Cross County - Cross County raced to a 60-0 halftime lead on East Butler, enroute to their 67-0 win over the Tigers, so all of these statistics came in the opening half. The great Carter Seim rushed for 142 yards and 3 TDs (38, 48, 19 runs) on just 9 attempts, THREW a 55 yard touchdown pass to fellow All-Stater Cory Hollinger, made 2 tackles on defense and recorded a 23 yard Pick 6.

Haiden Hild, who had shouldered a good portion of the rushing load in the previous absence of Carter Seim, rushed 4 times for 88 yards with two of those carries going for TD scampers of 4 and 70 yards. Cory Hollinger had 3 receptions for 71 yards which included the 55 yard scoring toss from Seim, made 5 tackles on defense, had several pancake blocks on offense and put 2 of his 3 kickoffs into the endzone for touchbacks.

With Carter Seim back in uniform, super coach Hayden DeLano’s troops will make a serious run at the Class D-1 title.

*Cody Bruegeman-Bloomfield - Senior All-State candidate, who rushed for 1,243 yards as a junior a year ago, went over the thousand yard rushing mark again with his 126 yards on 23 carries in the Bees big 28-22 win over O’Neill St. Marys.

*Adam Van Cleave-Columbus Lakeview - 2020 All-State selection ran for 112 yards and two touchdowns (58, 25 runs) on just 5 carries in the Vikings 42-6 win over North Bend Central. Lakeview has reeled off 4 consecutive wins since I witnessed their 30-17 loss to a strong Wayne team. Super coach Kurt Frenzen’s troops face winless Schuyler this week before closing at home on The Hill with city rival Scotus on October 22nd

Zelasney ran 14 times for 157 yards with touchdown sprints of 57, 20 and 45 yards and picked off a pair of Lawrence-Nelson passes on defense, one going for a 36 yard Pick 6. Isaiah also recovered a fumble and made 4 tackles.

*Kyle Kasik, Eli Hayes-Clarkson/Leigh - Kasik and Hayes combined for 245 yards rushing and 6 touchdowns in Clarkson-Leigh’s 60-34 win over Wisner-Pilger. Kasik rushed for 145 yards and 3 touchdowns (15, 52, 7 runs) on 13 carries while the speedster Hayes rambled for 102 yards on 25 totes with touchdown runs covering 3, 4, and 6 yards. Hayes also completed 7 of 9 passes for 96 yards and pirated a pass on defense.