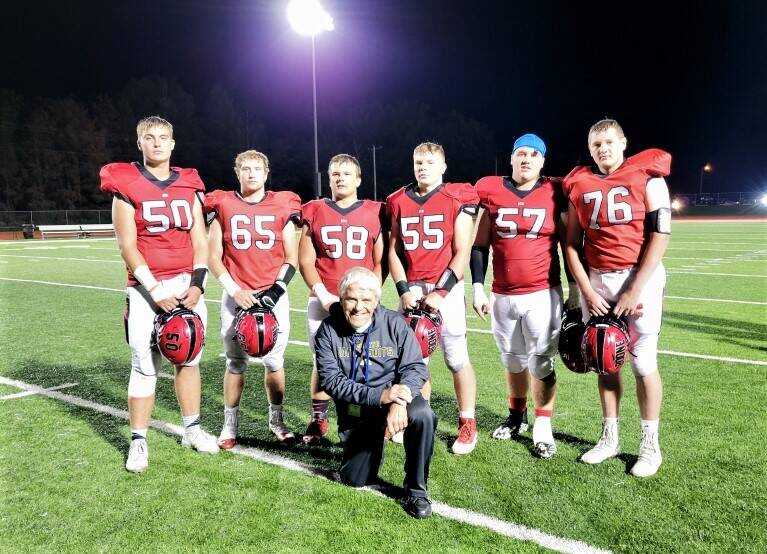 This is the Boone Central offensive line. These gentlemen were shining stars in the Cardinals 35-33 win over C-1, #1 Pierce Friday Night.

Three wins later, in front of a packed house in Albion, he does it again against yet another coaching legend, Pierce High’s Mark Brahmer and with a backup quarterback named Alex Christo, no less.

Christo, who was playing in place of injured starting quarterback Brandon Benes, threw for 175 yards and two touchdowns with no interceptions and continuously escaped for timely, critical rushing plays which added up to 124 yards on 20 totes when all the smoke cleared.

The Bluejays QB did end the night with a monster 305 yards through the air with 3 touchdowns, but Boone also made him pay with 3 interceptions. Sophomore Brant Benes and Carsten Bird picked off Scholting in the first half, but it was 5-10, 245 pound defensive tackle David Figgner who made the critical pick late in the 3rd quarter, snuffing out a big Pierce drive.

The majority of the scoring took place in the second half after defenses ruled the opening two quarters of play, resulting in a 7-7 halftime score.

Bounce Central’s big explosion came in a relatively short span of a 9 minute, 41 second stretch, beginning at the 7:13 mark of the 3rd stanza and ending at the 10:42 mark of the 4th quarter when Cody Maricle blew through a massive opening for a 30 yard touchdown sprint.

It was a mere six minutes prior to that quick scoring burst, that the very same Cody Maricle caught a fabulous 38 yard scoring strike from Alex Christo.

Maricle’s 4th quarter 30 yard touchdown blast gave Boone it’s biggest lead of the night, but the defending state C-1 champ Pierce bounced right back with a pair of scores in a little over a minute's time.

BUT, it was the missed PATs after Michael Kruntrad’s 1 yard touchdown run and the Scholting to Kaden Johnson 53 yard hookup that made the difference when the final gun sounded.

Speedy Boone sophomore Parker Borer bolted through to block the Keenan Valverde PAT kick after Kruntorad’s touchdown and the relentless pressure by the Cardinals blitzing defenders snuffed out Scholting’s passing attempt for a double PAT following the Scholting to Johnson TD.

Those two PAT denials by Boone Central kept the Cardinals in front 28-26 at the 8:00 mark of the 4th quarter.

Alex Christo then answered that Pierce touchdown pass with a sparkling 26 yard scoring burst right up the gut and through the heart of the Bluejay defense at the 3:40 mark of the 4th, extending the Cardinals lead to 35-26.

Following the magnificent script of the back and forth scoring, which was a trademark of this championship-type game, Pierce bounced right back with a sensational 83 yard pass from Scholting to Division One Two Time All-State star Ben Brahmer.

It looked like the son of Coach Mark Brahmer might be on his way to an 89 yard touchdown until a Boone Central defender in hot pursuit, clipped his heel for a touchdown saving tackle at the Cardinals 6 yard line.

The Bluejays scored two plays later when Scholting hit Husker pledge Ben Brahmer for a 2 yard score. The clock read; 2:26. There was time.

Pierce did not opt for the onside kick following their touchdown and Boone Central started, what they hoped, would be their final drive of the night. It was.

All the Cardinals needed was one first down to drain the final 2:26 of the game and game hero Alex Christo, the lion-hearted backup quarterback made sure of that with his 10 yard QB keeper that gave Boone the last first and ten they would need to secure the upset.

The win over Pierce came with extra sweetness due to the fact the school was honoring it’s 2001 Class C-1 State Championship team during this game. And wouldn’t you know it, who did that marvelous 2001 Cardinal squad beat back in 2001?

The 35-33 Boone Central win snapped a 16 game Pierce winning streak and also a 31 game regular season win streak had stretched all the way back to October 20, 2017.

Christo, who played in only two varsity games prior to this one, had a banner night throwing the ball. The 5-10, 140 pound lightweight junior completed 10 of 24 passes for 175 yards and 2 touchdowns with no interceptions.

The rugged Cody Maricle led the defense with 7 solo tackles. Junior Jackson Roberts also had 7 stops with 4 solos. Sophomore lineman Hank Hudson chipped in 6 tackles and has future All-Stater written all over him.

For Pierce, it was QB Abram Scholting leading the passing game with his 11 completions out of 19 attempts for 305 yards and 3 touchdowns. Hard running Matt Christensen led the Bluejay ground attack with 85 yards on 16 carries and one TD.

The star of the Pierce show was definitely Nebraska recruit Ben Brahmer, who caught 10 passes for a massive 246 yards and a pair of touchdowns. Brahmer just looks like a D1 recruit without catching a single pass and does so many things on the football field.

The dude plays both ways, kicks off, punts and is back to receive punts.

A breather at some point during the night for the two time All-State Pierce dandy? They call that halftime. He is something to behold!