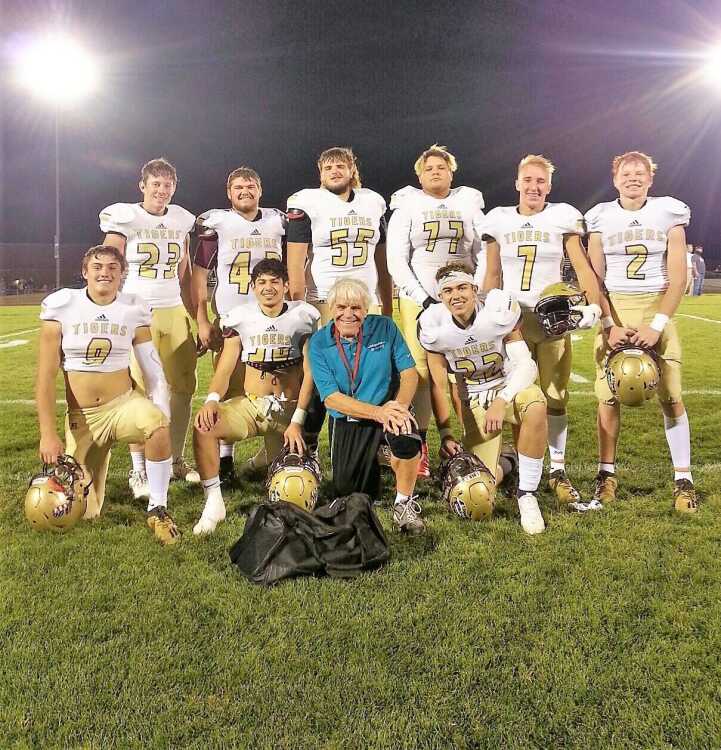 Dundy County/Stratton quarterback Quade Myers (front row, far left) is one of 8-Man football's premier players and has been since his freshman season.

*Quade Myers-Dundy County/Stratton - Was shining like a star in the Tigers 42-36 win over Hitchcock County. Myers, a three time 1000 yard rusher, ran for 184 yards and 3 touchdowns on 22 carries. The senior quarterback also completed 3 of 5 passes with a score, and made 12 tackles on defense.

Quade Myers is just plain and simple one of 8-Man football’s finest talents and will go down in the history books as such. This season alone, Myers has thrown for 386 yards (3 TDs) and rushed for 741 big ones with 11 trips to the end zone.

Myers has also scored on a Pick-6 and brought 3 kick returns and 3 punt returns back for touchdowns during his 38 game career. The Dundy County/Stratton star has been a starter at quarterback since DAY ONE for super coach Mike Spargo, who was a big time quarterback at Ventura (California) St. Bonaventure high school in the late 1990s.

During his time at Dundy County/Stratton, Quade has led his Tigers to 34 wins with just 4 losses, with appearances in the 2018 Class D-1 quarterfinals, the 2019 D-1 semifinals, and a Class D-1 state championship last season.

*Dylan Mostek-Bennington +teammates Trey Bird, Cayden Bluhm, Nick Colvert, Gunnar Lym, Connor Brecht - Dylan Mostek’s 189 yards rushing and 2 touchdowns on 24 carries against Omaha Skutt elevated him to 1,076 yards rushing after just 4 games. More interesting was the Badgers 42-7 victory over Class B’s number one Omaha Skutt. Even more head-turning was the fact Mostek wasn’t even needed in the 4th quarter with the Badgers setting off the running clock against the mighty Skutt earlier in the 2nd half.

Mostek had already compiled 141 yards on 13 totes by halftime and even had two touchdowns called back before he escaped for a 33 yard score in the 2nd stanza.

QB Trey Bird was very sharp in this one (as usual), completing 14 of 17 throws for 226 yards and 3 touchdowns. The amazing Cayden Bluhm handled two of those touchdown catches covering 16 and 71 yards, part of his 7 receptions for 149 yards night. Trevor Heese caught the other TD pass.

We would also be remiss if we failed to mention that outstanding Bennington Offensive line of #65 Jameson Krayneski, #70 All-Stater Jake Stier, #61 Cody Harris, #55 Nate Schaefer and the always dependable #64 Carter Lerch. This unit, is without a doubt, the finest O-Line in Class B.

*Christian Meneses-Plattsmouth - Averaged 16.3 yards per carry in the Blue Devils 47-7 win over Elkhorn Mt. Michael. Meneses ran the ball 20 times for a whopping 326 yards and 5 touchdowns, propelling the senior to his second straight 1000 yard rushing season. He is at 1,024 yards after 4 games this season.

This young man is a master at running behind his pads and following his blockers. Not too many better in the state than Meneses at his craft.

*Gunner Reimers-Palmer - 2021 Class D State Wrestling Champion (195 pound bracket) exploded for an unbelievable 422 yards on a grueling 51 carries and a state 8-Man record tying NINE touchdowns in the Tigers 86-72 win over Nebraska Lutheran. Reimers, Palmer’s quarterback, also threw 2 touchdown passes and made 13 tackles with 10 solos on defense, intercepted a pass and recovered a fumble in the win.

The ironic thing about all this is that Palmer was winless prior to this 86-72 win over Nebraska Lutheran and Reimers had only rushed for a paltry 3 game total of 145 yards on 57 carries and 2 TDs in losses to Nebraska Christian (12-59), Central Valley (12-62) and Humphrey St. Francis (20-58).

That’s how tough those kids are in Palmer that play for Coach Nathan Glause. They can appear overwhelmed in losses to top notch teams like St. Francis, but then explode when they are evenly matched on the field.

*Dominic Rezac-Omaha Westside - Set the school Single Game Rushing record with his 308 yards on 26 carries in the Warriors 47-19 win over Papillion LV South. Dominic’s 308 yards bettered the previous record of 307 set by Collins Okafor back in 2007. Rezac scored four touchdowns in the win, those runs covering 55, 19, 14 and 48 yards. The flashy senior raised his 2021 four game rushing total to 606 yards (6 TDs).

*Nathan Pederson-Millard West - I’m beginning to wonder if anyone but Millard South can stop Nathan Pederson, and I’m not too sure about that if the two Millard schools meet again in the playoffs. Last week in the Wildcats 37-14 win at Kearney, Pederson rushed 34 times for 226 yards with short TD blasts of 1 and 2 yards.

Yes, #1 Millard South held Nate to 59 yards, but his remaining three outings were; 248 yards against Elkhorn South, a massive 324 big ones vs. Millard North and the 226 in the Kearney game. That’s 214.3 yards per, friends. Take away that Millard South game and Pederson is rushing at a pace of 266 yards’game. That’s scary.

*Noah Walters-Lincoln East - Senior gunslinger hit 15 of 24 passes for a massive 416 yards and 6 TDs in the Spartans 56-20 win over Millard North. Favorite target Cooper Erikson caught 4 Walters aerials for 159 yards and long distance TD grabs of 90 and 55 yards. Billie Stephenson caught 5 passes for 103 yards with scoring receptions of 19, 29 yards. Luke Greisen had 2 catches for 83 yards, one being a 72 yard touchdown strike from Noah Walters. Aj Seizys had the other scoring reception of 22 yards, part of his 4 catch/71 yard night.

This season alone (after 4 games), Walters has connected on 62% of his 113 passes for 1,235 yards and 17 touchdowns with a single interception coming in that strange loss to Papio LV South. The 6-0, 195 pound senior QB has 4,785 career passing yards with 54 touchdowns right now.

Three of Miller’s TD passes were gathered in by the great Beau Lee (16, 5, 30 yards), while the remaining one of 18 yards was caught by Zach Tesarek in the first quarter. Lee led all Lourdes receivers with 8 receptions for 101 yards.

Joe Kearney also scored twice on touchdown runs of 5 and 10 yards and was a monster on defense, making 16 tackles. Miller, Kearney and Octavic Lopez all recovered fumbles in the blowout victory. Miller also picked off a pass in the game (of course he did!)

*Zane Flores, Brayden Chaney, Isaiah Weber-Gretna - Junior QB Zane Flores, who has started every game since his freshman season for the Dragons, exploded for his highest passing total of the season in Gretna’s 30-7 win over Lincoln Pius X. Flores hit 18 of his 26 passing attempts for 278 yards with all three touchdown passes going to senior Brayden Chaney. Brayden actually grabbed four Flores passes for 115 yards in the win.

*Isaac Kracl-Crete - The Cardinals senior continued his torrid rushing pace in Crete’s 56-28 win over Lexington. The speedy Kracl punished the Minutemen defense with his 281 yards on 30 carries (2 TDs). Isaac also had a sack and a fumble recovery on defense.

Isaac Kracl is one of Class B’s leading rushers this season with his 4 game total of 866 yards and 10 touchdowns. This dude is Good!

*Nolan Wetovick-Cozad - Haymaker quarterback engineered a huge 18-15 win over perennial power Adams Central in the Patriots house. Wetovick completed 12 of 15 passes for 195 yards and a score and rushed 20 times for another 85 yards. Nolan also picked off a pass on defense for the unbeaten and 6th ranked Cozad.

*Trevin Wendt-Pleasanton - Swiss Army Knife junior rushed for 199 yards and 3 touchdowns, returned two kick-offs for scores but wasn’t enough as the Bulldogs gave up a pair of 4th quarter touchdowns to Ansley/Litchfield, leading to a 44-40 loss to the Trojans. Wendt, by the way is a very special football player and just a junior.

*Kolby Blaser-Columbus Lakeview - Just as I predicted, Lakeview bounced back from that Wayne loss by ripping Lincoln Christian 49-8 and Vikings quarterback Kolby Blaser was just razor sharp in the rebound win over the Crusaders. Blaser completed 5 of 8 passes for 118 yards with scoring tosses of 5 yards to Cooper Tessendorf, 24 yards to Adam Van Cleave and a 58 yard bomb to Mason Viergutz.

The Lakeview magician also rushed 8 times for 109 yards with touchdown runs of 31 and 64 yards. The Vikings defense also sparkled in the win, allowing just 133 yards and 7 first downs. Brock Mahoney recovered a fumble and Landon Ternus picked off a Crusader pass to aid the defensive effort.

*Aiden Kuester-Neligh-Oakdale - Junior All-State selection hit 19 of 28 passes for 328 yards and 5 touchdowns in the Warriors win over 48-32 win over North Central. Kuester also ran for 85 yards and made a whopping 21 tackles on defense with 9 solos and 2 TFL.

That makes 1,113 yards through the air (17 TDs) thus far in 2021 for Aiden Kuester. Add in another 384 rushing yards with 4 scores and the junior sensation is off to another great start for 3-1 Neligh-Oakdale.

In just 19 career starts, Kuester has thrown for 3,309 yards with 42 touchdowns, rushed for another 1,442 yards and another 29 TDs, made 191 tackles with 26 stops behind the line of scrimmage, made 4 interceptions, blocked 2 field goals and one punt.