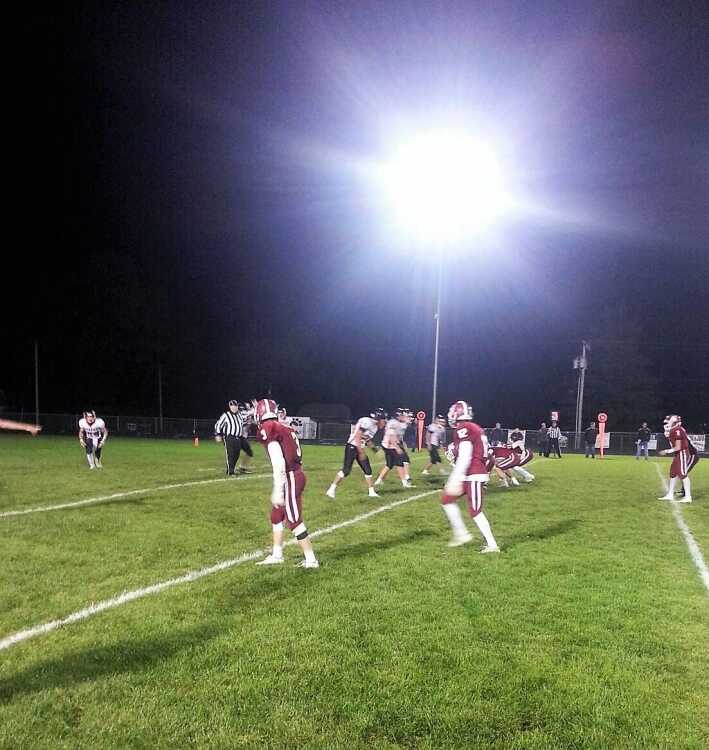 Fullerton QB Hunter Haughton (far right) awaits the snap from center in the 2nd overtime in a Thursday night game with Palmer. The Warriors would go on to beat the Tigers 50-48 in Double OT.

Fullerton had their own version of Wounded Warriors heading into Thursday night’s D-1, District 6 matchup with a dangerous Palmer team, who is much better than their 1-3 record would indicate.

The Warriors, down 4 players, including 3 year starter Connor Sonderup and Isaak Norman, sported a roster that dipped down under the 20 able bodies mark.

On an absolutely perfect night for high school football, it was a chess match between two of the best Eight Man football minds in the state in Palmer’s Nathan Glause and Fullerton’s Ryan Haughton.

And like two prize fighters in the ring battling it out for a title, both teams had to fight back from knockdowns time and time again on this gorgeous Thursday evening. You just had the feeling all along, this baby was not only heading for overtime, but that a razzle-dazzle play on a double PAT play would be the deciding factor in determining the winner.

With Channels 10/11 Now co-anchor Dan Corey driving all the way from Lincoln to cover the game, it appeared we were going to be in for a low scoring slobber-knocker in the first quarter.

With Palmer’s four linebacker look constantly shifting from side to side to halt the run and Fullerton’s entire defense collapsing in the middle to stop running plays, the only scoring in the opening quarter came when Palmer’s quick hitting senior Roy Guzman slipped in from the three to put the Tigers up 6-0.

Powerful running, 190 pound Jesus Guzman added the two point conversion to make 8-0, and we had one quarter in the books with only 8 points on the board.

It took only one minute deep into the second quarter for the red-hot passing connection of Hunter Haughton and Cole Horacek to open the Warriors scoring. Young Haughton spotted classmate Cole Horacek in single coverage, then lofted a 36 yard scoring strike to pull Fullerton with 8-6.

Haughton then nailed Isaac Gleason for the double PAT and things were knotted at 8 apiece.

Palmer answered right back two and a half minutes later with a 26 yard off-tackle scoring run by talented quarterback Ruger Reimers. After Reimers ran in the 2-point conversion, giving the Tigers a 16-8 advantage, the Haughton/Horacek show really kicked into high gear for Fullerton.

Before the halftime gun sounded, Hunter Haughton would find Horacek for two more touchdown passes covering 37 and 7 yards, then run one into the endzone from a yard out himself.

Fullerton’s last touchdown of the 2nd quarter could really have damaged Palmer, given the circumstances. It appeared the Tigers might be playing it conservative just to get into the halftime break trailing only 22-16.

Palmer had just earned a 1st down on their own 34 with :20.1 seconds remaining in the second quarter when Jesus Guzman caught a pass form Reimers, advancing 8 yards to the Fullerton 38.

Before Guzman could get one step further, 200 pound Isaac Gleason delivered one of his many knockout blows of the night, jarring the ball loose from Guzman’s grasp. Kyle Knopik was right there to play “johnny-on-the-spot”, picking the ball out of mid-air to advance it all the way to the Palmer 7 yard line.

The Warriors lined up quickly, and Hunter Haughton found Horacek for their third touchdown hookup of the 2nd quarter. The Fullerton scoreboard clock read Warriors 28-16 Palmer and the time? :2.2 seconds left till halftime.

And right there to tell me “I told you so” (about the Haughton to Horacek TD connection) was Football Mom/Coaches Wife, Lynn Haughton.

You just knew Tiger coach Nathan Glause would fire his Tiger troops up at halftime. I’ve been around the man too long to expect anything less, and he didn’t disappoint.

Palmer came out in the third quarter to put together an old fashioned power-running, right up the gut, 11 play, 53 yard scoring drive, buoyed by the running of Ruger Reimers and Roy Guzman.

Reimers finally bolted in from the 8 yard line capping off the five minute, forty six second drive. Reimers again ran in the 2-point conversion and Tigers were back in business trailing only 28-24. More importantly, Big Mo had just shifted from the Fullerton side to the Palmer side of the field.

The Tigers then rode that momentum, adding a pair of critical 4th quarter touchdowns that happened within 2:07 of each other.

Reimers connected with Karson Mingus for a 21 yard scoring pass, then pinned Fullerton back on their own 15 after Karsen Reimers sailed his 3rd straight kick-off into the Fullerton endzone for a touchback.

Disaster would strike Fullerton on that next series, just as it had to Palmer right before halftime.

The Tigers applied a killer QB blitz to hurry Hunter Haughton, who advanced the ball only a yard upfield before a Palmer linebacker applied a jarring tackle to the Fullerton QB, popping the ball into the air. 190 pound junior Chet Wichmann was right there to snare the ball out of the air, returning it 12 yards to the Fullerton 4 yard line.

Ruger Reimers ran it in for the score on the very next play, and suddenly Palmer was back on top 36-28 with 4:54 left in the game and momentum on their side.

Things got worse for Fullerton when Karsen Reimers boomed another kickoff into the endzone for a touchback, then forced Fullerton into a 3 and 9 at the Warrior 16.

Fullerton appeared to be done dealing when they came up short on the 4th down play, but were given new hope after Pamer was whistled for a personal foul on the play.

After the penalty yardage advanced the ball to the Fullerton 33, the Warriors drove it all the way to the Palmer 8 yard line before the Tigers stiffened. Fullerton had one last shot.

Ryan Haughton then sent in a slick play calling for a reversal in roles between Haunter Haughton and Cole Horacek.

After some razzle-dazzle in the backfield, Cole Horacek came up with the ball, tossed an 8 yard TD pass to Hunter Haughton, and the the Warriors were with 36-34 with 1:24 left in the game.

Fullerton still need a 2 point conversion to tie it at 36 and that exactly what happened when Haughton again nailed Cole Horacek for the double PAT.

The Warriors held Palmer after the ensuing kickoff and we were headed to our first overtime.

Fullerton won the toss, took the ball first, and Cole Horacek then scored his 4th touchdown of the night on a 2 yard jet sweep, the PAT run was short and Fullerton was up 42-36.

The Tigers immediately answered on a Ruger Reimers 2 yard dash, but Karsen’s PAT kick was blocked and we were headed to our second overtime with things all square at 42.

It was Palmer’s turn to have the ball first, Ruger Reimers walked in from the one after reeling off a 9 yard gain the previous play. Fullerton stuffed the double PAT point try and it was Tigers up 48-42.

Now it was time for Ryan Haughton to come up with some more of his Warrior magic. It was vintage Coach Haughton, as the ball was handled by three different Warrior players before Isaac Gleason finally came up with the football in the Fullerton backfield.

Now in the QB position, Gleason calmly waited a few seconds, then spotted…….you guessed it, Hunter Haughton for the 2 yard touchdown pass.

But…..Ryan Haughton needed one more slight of hand trick to put this one away and who did he go to? Of course, the bread and butter pass/catch combination of son Hunter and Cole Horacek.

Worked like a charm on the two-point conversion and Fullerton secured a 50-48 win over Nathan Glause and the fighting Palmer Tigers.

Unfortunately, I have no official stats at this time, but hope to secure those sometime Friday and add that information to this story.

Fullerton, who improves to 4-1, will stay at home to face Nebraska Christian next Friday while Palmer, now 1-4, will stay on the road, heading to Ravenna next Friday night.