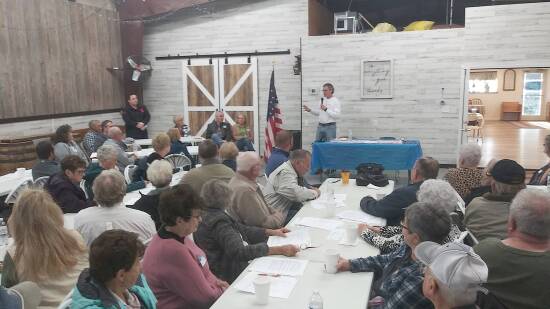 McCOOK, Neb. — Liberal Democrats want to take our freedoms, guns, land, water and even our children, but getting involved with the Republican Party can help stop them, an Ogallala party activist told a crowd of about 80 people Tuesday night.

Keith County GOP Chairman Ron Schmidt risked alienating the crowd with criticism of former President Trump and said Sen. Ben Sasse’s actions were “water under the bridge,” but had little trouble winning the gathering back as he joined other speakers in decrying initiatives from the left such as proposed state sex education standards, the “30 by 30” land use and National Heritage Area proposals and opposition for voter IDs.

Schmidt, a retired Ogallala car dealer, told the crowd at “Bedore’s Barn” he was disappointed with the former president.

“I know I’m gonna alienate everybody in this room tonight,” he warned. “I am not ‘forever Trump.’ I am disappointed in his rhetoric. I think he has an incredible ability to say the stupidest things at the worst possible times. He’s not a humble leader, and God tells us in the word that humility … is a sign of good leadership. So I’m upset with him about that.”

As for another Trump critic, however, he said “I want to just very briefly express my appreciation for our Sen. Ben Sasse. He has created a wave in Nebraska, and that is a good thing … it’s a part of the reason that some of you might be here. He’s created a wave, and we need to ride that wave, we need to keep that (conservative) momentum going.”

Schmidt noted he took issue with an Omaha World-Herald headline that indicated the Republican Central Committee “stopped short” of censuring Sasse for his response to alleged 2020 election fraud, choosing instead to “rebuke” him.

He cited dictionary references to censure as an “expression of formal disapproval,” and a rebuke as “an expression of sharp disapproval or criticism,” adding that “God rebuked Lucifer when he kicked him out of heaven and condemned him to hell through eternity.”

Schmidt introduced Tyson Shepard, Nebraska Republican Party political director, a recent transplant from Michigan, where he was among the Republican observers that officials attempted to keep from monitoring vote counting. Shepard said he was awake for four days straight because he would not have been readmitted to watch the counting had he left the building in Detroit.

Pamela Frecks, a retired McCook teacher who organized Tuesday night’s Red Willow County GOP meeting, was gratified by the turnout, which included representatives from a number of other counties.

Desautels a Massachusetts native who said he was the only Republican in his family, spoke out against health standards proposed by the Nebraska State Board of Education, saying such standards had been used to promote the LGBQ agenda and are a “direct assault on parental rights.”

Tony Primavera, who is superintendent of the Hayes Center Public Schools, said that while local boards have the option of creating their own health standards, the issue is not going to go away and parents and school board members need to stay vigilant.

One’s sexual orientation “is nobody’s business,” Schmidt said. “I’m in the closet, we should all be in the closet, that’s where it belongs. We need to protect the innocence of our children.” Time spent on sex education means less time on core subjects such as reading and math, he added.

Wilmot explained the differences between “30 by 30” and National Heritage Area proposals, but drew comparisons on how they could both lead to lost property rights.

President Biden’s 30 by 30 executive order is billed as environmental protection, but actually takes away local control, she said.

While the National Heritage Area proposed for our area is billed as a boon to tourism, it actually opens the door to more regulations by other government agencies that will take away the rights of local landowners, she said.

Schmidt, a member of Rotary International, which led an effort to mark the Great Western Trail extending from Texas to Montana, said an effort to make the cattle trail part of the National Park System, could have led to similar restrictions on private property.

Dunn, a former city councilman, said the current pandemic was unleashed from the Wuhan lab in China, and warned that a new lab under construction in Manhattan, Kan., had similar disastrous potential.

The $1.25 billion National Bio and Agro-defense Facility is part of Kansas State University and being constructed by the U.S. Department of Homeland Security.

Dunn warned that the above-ground facility will be vulnerable to a tornado, and diseases such as hoof-and-mouth, ebola and mad cow could be spread by a storm.

Shepard, who worked in Washington State before going to Michigan and now Nebraska, urged members of the audience to get involved in the local and state Republican party and seek local offices.

As deputy political director for the GOP in Michigan, Shepard helped recruit 400 or more Republicans on a moment’s notice to monitor the vote-counting in Detroit, a confrontation with officials and police that got national media attention.

Schmidt said he saw no reason not to require showing a driver’s license to vote when one is required to buy alcohol. An audience member called for a boycott of companies punishing Georgia for its new voting laws, saying conservatives need to vote with their pocketbooks.

Repeatedly encouraging the audience to get involved with the local Republican Party, Schmidt decried Democrats and RINO’s (Republicans in Name Only) in the officially nonpartisan Nebraska Unicameral for a number of proposed legislations:

— LB97 Minor children to be adopted by unmarried persons

— LB27 Physician need not be present at an abortion

No Nebraska governor can be elected without the support of the 3rd District, he said, and it’s imperative that Republicans in each county are organized to flex that muscle.

Comments
View 8 comments
Note: The nature of the Internet makes it impractical for our staff to review every comment. Please note that those who post comments on this website may do so using a screen name, which may or may not reflect a website user's actual name. Readers should be careful not to assign comments to real people who may have names similar to screen names. Refrain from obscenity in your comments, and to keep discussions civil, don't say anything in a way your grandmother would be ashamed to read.
Respond to this story