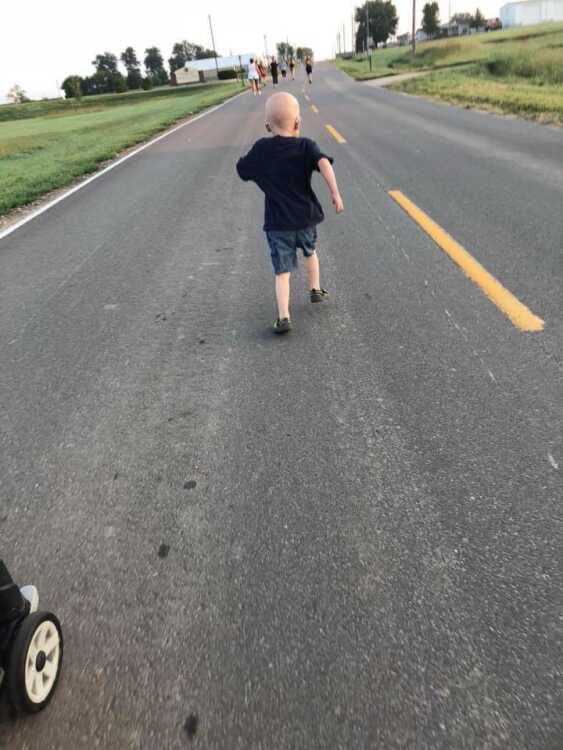 Each day 43 families in the United States hear the words ‘your child has cancer’ according to the Children’s Cancer Research Fund. It is a diagnosis that providers don’t care to deliver. It can be devastating to anyone but when the news come about your son or daughter your whole world is turned upside down. It takes families on such a roller coaster of emotions.

The picture today is three–year old Ezra Sallman. Ezra is my grandson. It is a picture of determination and perseverance of a child and his immediate and extended families, who are dealing with childhood cancer. Ezra and his family were one of those 43 families on November 21, 2017 who heard that devastating phrase.

Here is the back story to his photo.

Ezra was diagnosed with medulloblastoma, a brain cancer. His tumor was located in the back of his head near his spinal column. His pediatric neurosurgeon was able to remove the tumor. Luckily it had not fingered out and the surgeon was able to remove the entire tumor. However, medulloblastoma is aggressive which meant Ezra had to face multiple rounds of chemotherapy because without the treatments, there is a 100% remission rate. Treatment usually includes radiation but due to his age at diagnosis, it was not an option. He was under the care of the oncology team and then the bone marrow transplant team as well as the nurses and aides on the oncology floor during his time at the Children’s Mercy in Kansas City. He had to have a stem cell harvest and then during the last three rounds of chemo, the stem cells were transplanted back to help his body recover from the chemotherapy. The chemotherapy treatments meant weeks and weeks of hospitalization. Ezra had to have lumbar punctures besides the MRI’s. He had to have eye exams and hearing exams. One side effect of one of the chemo drugs was that Ezra lost hearing and has to wear hearing aids. (Which insurance doesn’t cover because they are considered ‘cosmetic’. Yep – you read that correctly.) He will not regain the hearing he lost. He also has some neuropathy in his legs, which hopefully will get better.

During his treatments, Ezra could not be more than one hour away from the hospital because if he spiked any type of fever, they had to get to Children’s Mercy within the hour. His first trip ‘long’ trip out of town since his surgery was to come to Falls City to enjoy the Cobblestone weekend. He and the family started the day off with the Cobblestone Fun Run. He was riding along in his stroller but then he wanted out to ‘run’. His mom snapped the photo of Ezra climbing the hill on Bill Schock Boulevard near the CMC campus in Falls City. Ezra walked and ran almost a mile of the 5K that his parents and older sister were participating in. He was able to take in other fun activities that weekend with his favorite being the frog jumping contest.

While the initial treatments are over, Ezra and his parents and sister have a long road ahead. Their ‘new’ normal means he has to have scans every 90 days for at least two years. He has to have hearing checks and eye exams. He will have to have more blood draws. The chemotherapy treatments were very hard on his digestive tract. His health care team (mom, dad, family, and providers in many specialties) have to work hard to get him back to being a healthy and active little boy.

However, with there are no guarantees so it is a day at a time journey, just like all the other families who have received the cancer diagnosis before and since Ezra did.

Here are some websites if you would like to read more about childhood cancer.

If you are so inclined to donate to cancer research fundraisers, many towns have their own fundraiser opportunities with their local or regional cancer societies. If you are looking for specific ways to help childhood cancer research, a great place to donate is The Team Jack Foundation in Atkinson, NE. They have been fabulous in their support of Ezra and so many other children with brain cancer. Here is a link to their website.

If you wish to read the about the story of victories for Ezra during this journey, there is a Facebook page – Ezra James #EzraStrong. His parents chronicled this awful journey with as much courage and grace as anyone came having to face the nastiness of pediatric cancer.