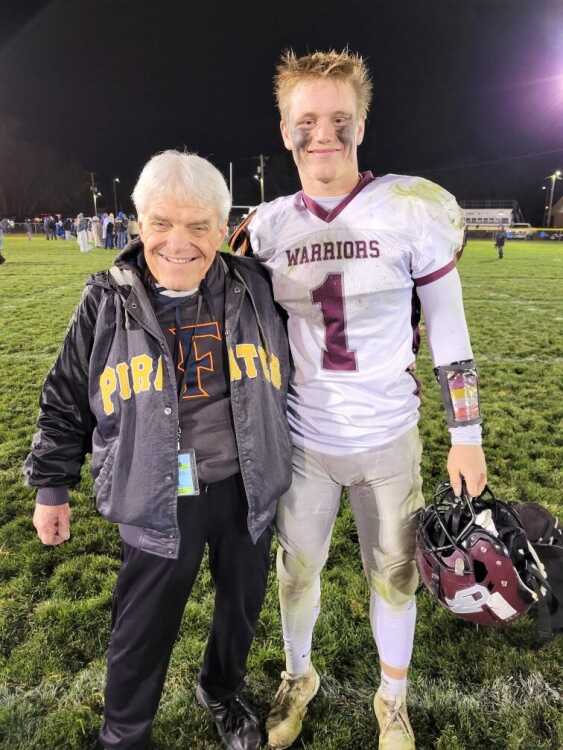 This is Neligh-Oakdale's record setting quarterback Aiden Kuester. Can he lead his team to the Class D-1 State Championship Game in Lincoln with a victory over a potent North Platte St. Patrick's team?

The St. Patricks Irish first venture into the 8-Man football ranks has been a successful one despite the huge loss of three-time 1000 yard rusher, Jackson Roberts. No opponent has come within 27 points of the Irish, who have spanked

Opposing squads by an average score of 55 to 11.

The Irish rely on a run heavy offense, averaging 275 yards a game compared to 55 yards passing per contest. The thing about this North Platte St. Pats team on offense is the guys up front. Remember, this group dropped down from 11-Man football this year and had three O-Line starters coming back and some big time subs. To be blunt, if I were 30 years younger, I could probably gain some yards running behind this current Irish O-Line. Yes, they ARE that talented.

Senior Will Moats, James Herings, Jaxon Knisley and All-State lineman Brecken Erickson can score at any given time behind this line.

The St. Patricks defense is simply men among boys. They have given up an average of 140 rushing yards a contest and check this out…..60 total passing yards ALL YEAR. That is not a misprint. How potent is this defense to take a 57-0 lead last Friday on an Elmwood-Murdock team that averaged 60 points and 503 yards a game coming in. Good Lord!

Who can beat this North Platte St. Pats team? Well, the great Aiden Kuester and those Neligh-Oakdale guys are going to give it a shot Friday night.

About that Neligh-Oakdale team. I am just 6 days removed from watching this team win a hard fought 40-28 battle with a fine Riverside team. Aiden Kuester is as good as it gets for an 8-Man football. One of the very best I’ve seen in a long time. The dude seems indestructible, running up the gut nearly every single carry and still making a gazillion tackles on defense.

Kuester does have an outstanding receiver in 6-2, 190 pound junior Bryson Gadeken, a really physical football player. Gadeken has 1,013 receiving yards this Fall and many of those yards come after he is hit the first time following a catch.

On defense, you guessed it, Kuester is the leading stopper with a crazy 164 tackles (70 solo/94 assists/8 TFL/2 INTs. Bryce Gadeken is also a mean motor scooter on the defensive side, registering 129 stops with an incredible 24 TFL. Not far off his pace is senior Levi Drueke with his 125 tackles.

As a team, Neligh-Oakdale has registered a whopping 104 tackles behind the scrimmage line in 2022. They have also forced and recovered 11 fumbles.

How about Head Coach Jim Clarkson, Assistant Bob McEvoy and those Clarkson-Leigh Patriots! Just one loss during the regular season and that to nemesis Cross County on the last play of the game. The Cross County rematch in the playoffs never materialized as a 4-4 Weeping Water team took care of Cross County, then the Patriots in turn eliminated Weeping Water by a decisive 46-18 count.

Now it’s on to Stanton in the D-1 semis, a team many predicted would win 8-Man’s largest class in 2022. Clarkson-Leigh will have something to say about that with their ground oriented offense, averaging 345 yards a contest. All-State candidate Kyle Kasik leads the way with his 1,667 yards rushing and 29 touchdowns. Junior QB Ryan Brichacek has added 639 rushing yards (11 TDs) and is an efficient passer, completing 53% of his 45 passes for 545 yards and 8 TDs.

The Patriots have a sterling O-Linemen in All-Stater Drew Beeson and a couple of fine receivers in Kasik and his senior classmate Mason Whitmore (219 yds/3 TDs). Kasik’s statistics as a pass catcher are unsurpassed in 8-Man football. The dude has SIX receptions, good for 249 yards (41.5 yards per catch) with 4 TDs.

If you are Stanton, you do not want to allow Mr. Kasik to catch a ball out of that Patriot backfield.

On defense, Drew Beeson is one of the best in D-1 with his 111 tackles (57 solos) and a pair of interceptions. Junior Dylan Higby (66 stops), senior Jackson Koehn (65 tackles) and Mason Whitmore (58 tackles) are also defensive standouts.

The Patriots have also recovered 14 fumbles as a team.

*Oh man, this Stanton bunch is good! The Mustangs are rolling along in 2022, averaging 409 yards/game on offense and are 2nd best in D-1 defensively, allowing just 212 yards a contest. No opponent has come close this season, with only Weeping Water (23 point loss) and Riverside (27 point loss) coming the closest.

Sophomore sensation Becker Pohlman is the rushing leader for Stanton, rambling for 1,421 yards and 24 touchdowns in 10 games. Pohlman’s sophomore classmate Barrett Wilke, has been a force as well, gaining 898 yards with 20 scores.

The Mustangs will put the ball in the air about 5 times a game, but are deadly accurate with the passing game. QB Joe Butterfield has thrown just 40 times, but completed 29 of those for 936 yards and 16 TDs with just 2 INTs. THAT is a completion percentage of 72.5% and 32.5 yards a toss.

You think this team just might be a powerhouse the next TWO seasons? Wow!

While I can’t predict whether this Central Valley team will beat the mighty Howells-Dodge or not, I can tell you this current Cougar squad will be on the same level physically with the Jags. This Central Valley football family will flat out smack you in the mouth with their blocks and for sure on defense with their tackling. No, these Cougars will not match up weight wise across the board with Howells-Dodge, but they will certainly let you know they are here to play some physical football.

My friends Chip Bartos and Jes Rother have done a fabulous job coaching this football team and turning Greeley, Wolbach and North Loup-Loup-Scotia into a football crazy quartet of small towns.

On defense, the Cougars turn every game into a real slobberknocker. Leading the way is 5-8, 160 pound Ty Landers, who has made a monster 142 tackles and fears nobody. Landers has logged double-digit tackles in all but two games this season for Central Valley. Another player that caught my eye when I saw this team against O’Neill St. Marys, was #5, sophomore Grady Kelly (99 tackles/53 solos). He also has three interceptions and 3 fumble recoveries.

*What can you say about defending this Class D-1 champion Howells-Dodge football team except Wow! My longtime friend Mike Spiers has won TEN state championships and fashioned a wild 261-62 career record during his current ongoing stint at Howells/Howells-Dodge.

In otherward, every time Mike’s teams walk on the football field, they have a probability rate of 81% that they are going to win the game they are playing against YOUR football team. Mike may even tell you exactly where they are going to run the football on every play and dare you to stop it. And why do I say RUN? Because Howells-Dodge has attempted only 29 passes all season, pretty normal for the Jags.

Brittin Sindelar is the Jags quarterback and despite rushing the ball just 35 times for 177 yards thus far, the dude has 8 TDs.

Defensively, Howells-Dodge is paced by Jestin Bayer’s 86 stops. After Bayer, the Jags tackling is spread out among the defenders very well, with TEN players logging more than 30 stops. Worth mentioning is defender Aandy Dominguez, who plays the game with extra gusto. The dude just loves the game and Andy’s 15 tackles for losses reflect that passion.

*This current Bloomfield team may as well be considered undefeated. The only blemish on the Bees record was a regular season closing loss to Wynot (44-30), a team they defeated in last Friday’s D-2 Quarterfinals (34-22). In all seriousness, this current Matt Kuchar Bees squad is the Real Deal.

Bloomfield is led by Nebraska 8-Man football’s most dangerous player, junior Wiley Ziegler. Most dangerous, you say? Well, all Wiley has accomplished is setting a state record for Most Career Return (Kick/Punt) Touchdowns (14). Ziegler has taken 8 punt returns and 6 kick-offs to the house in his brief 30 game career and remember he has a year of eligibility left in high school!

Ziegler has also rushed for 1,609 yards and 29 scores, caught 3 touchdown passes and returned a pair of kickoff for TDs in 2022. Now don’t be lured into thinking Bloomfield just runs the football. Oh, no, no, no.

Sophomore Braeden Guenther has attempted 109 passes in 2022, completing 63 of those for 948 yards with 16 touchdowns. His favorite target, junior Layne Warrior, has latched onto 27 of those Guenther passes for 539 yards with 7 TDs. Four other Bloomfield receivers have at least one catch for a touchdown this season.

The Bees defense isn't all that bad either, with Ian Kuchar making 81 tackles which included 23 unwanted visits to the opposing team’s backfield which resulted in tackles. You had to know that Wiley Ziegler had to be in this picture and sure enough, the Swiss Army Knife player has logged 75 tackles with a staggering 67 of those being solo stops. Ziegler’s junior classmate Mason Mackeprang also has 75 tackles with 47 solo stops. Freshman Brock Jeannoutot has been impressive too, making 68 tackles with 44 solo stops and 13 TFL.

As a team, the Bees have made 79 tackles for losses and pirated 18 enemy passes.

*2022’s former mystery team (Hitchcock County) stat sheet was finally released. AND it is impressive. You might recall that Hitchcock County has only played 8 football games this season due to having two teams wave the white forfeit towel, resulting in no-game 1-0 wins which helps nobody. So, here is what we know about this football team that appears to be hitting peak form at the present time.

The Falcons are going to throw the ball about 4 times a game, gain around 72 yards and possibly add a passing touchdown. They will run the football maybe 52 times and gain a whole bunch of yardage (around 436 yards) and score EIGHT touchdowns. Yeah, that’s a normal Friday Night for this Hitchcock County crew. Look out!

So, who leads this Falcon rushing attack? For one, it’s senior Keynan Gaston, who has zipped for 1,435 yards and 25 touchdowns. And remember, that’s through EIGHT games. Not far off his pace is fellow senior Kolyn Gaston (Twin Brother?) (937 yards/20 TDs). And, not far off Kolyn’s yardage total is senior Drew Scott, who has 764 rushing yards with 10 touchdowns.

Now, #9 Kenyan Gaston is the quarterback and he has completed 20 of his 30 passing attempts for a big time 582 yards and 6 TDs with just one lonely pick. Who is on the receiving end of Kenyan’s throws? Why, it’s 150 pound TE Trent Kisker, who has 8 receptions for 303 yards and FIVE scores. Yeah, that 38 yards a catch! Sophomore Mason Schilke is next with 7 grabs for 136 yards and a pair of receiving scores.

On defense, the Falcons have allowed just FIFTY TWO POINTS in 8 games. Keegan Shular leads the squad in tackles with 125, Kolyn Gaston follows with 64, then Kisker with 62, Keynan Gaston has 61 and the sophomore Mason Schilke fills out the tackle leaderboard with 58 stops.

The brutal calling card of this Hitchcock County “D” is their ability to rush the quarterback and plant the dude in the turf. The Falcons have recorded a mind-boggling FORTY SEVEN sacks in 8 games. Shuler with 17 and Kisker’s 15 sacks lead the pack.

The Falcons have also picked off NINETEEN passes this season with Kolyn Gaston pirating 8 aerials, followed by Mason Schilke and Drew Scott, who have 4 interceptions apiece.

And NOW you know about Hitchcock County and why this bunch from out West is a legit Class D-2 title contender and just a step away from a trip to Lincoln.