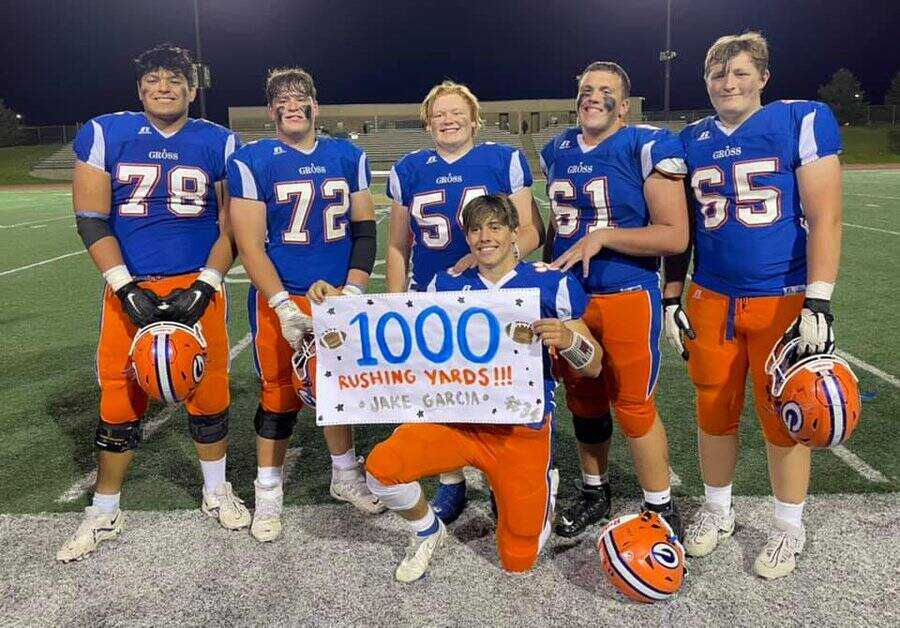 *Jake Garcia, Colby Duncan, Cougar O-Line - With the help of this outstanding Gross Catholic offensive line, junior RB Jake Garcia has reached the 1000 yard rushing plateau for the 2nd year in a row. The powerful, yet speedy Garcia broke away for 158 yards and a pair of touchdowns (34, 9 runs) on 16 carries in the Cougars 49-7 win over South Sioux City.

About that Cougar offensive line. Jake Garcia will tell you this group can flat out create some openings and provide excellent pass protection for Colby Duncan. Let’s meet these MEN up front, and the scary thing for opponents is the fact there is just ONE senior in the group.

The remaining pair of 270 pound juniors, Nacarelli and Almgren, enjoy a few pancakes now and then, and I “ain’t” talkin’ bout the Perkins Restaurant kind.

*Braeden Guenther, Layne Warrior-Bloomfield - Who in the name of pounding the rock would ever dream of saluting a Bloomfield quarterback and wide receiver for setting any kind of aerial records. Yes, that same Bloomfield Bees team that has produced more thousand yard rushers (36) than any other school in Nebraska, regardless of class, produced a pair of record setters that accomplished that through the airwaves.

Guenther has already set the Single Season Record for passing yards with his 1,341 yards. The extraordinary Freshman completed 70 of 101 passes to reach that 1,341 yards which included 14 TDs with just 2 INTs.

Oh, now don’t get the wrong idea here, Bloomfield does have a 1000 yard rusher in Cody Bruegman (1,037 yards) and the Bees have rushed for 1,655 yards compared to that 1,341 passing, so they are STILL considered a running team, only now twice as dangerous with that Guenther to Warrior pass/catch threat.

The 7-1 Bloomfield team heads into the Class D-2 postseason as the #3 seed with a home game versus a 4-4 Wausa club. Kickoff is set for 7 PM. Just keep an eye on the sky Thursday night.

*Trevor Thomson, Alex Schindler-Summerland - Amazing junior RB closed out the regular season with a bang in Summerland’s 58-20 win over Ainsworth. Thomson ripped the Bulldog defense for 254 yards and 3 touchdowns on 18 touches. Trevor also made 6 stops on defense while teammate Alex Schindler pirated a pair of passes.

Heading into the D-1 playoffs, Trevor Thomson has exploded for 1,768 yards with 24 touchdowns for the second year school.

Speaking of playoffs, Summerland enters the D-1 postseason as the #12 in the West bracket and will hit the road to face a rough and tough 7-1 Anselmo-Merna squad. Kickoff is set for 5:00 CDT.

*Carlos Collazo-Aurora - Speedy, powerhouse runner smashed over Northwest defenders to the tune of 205 yards on 22 carries in the Huskies 41-27 victory over the rival Vikings.

*Tate Thoene, Grant Arens, Jaxon Bernecker-Hartington Cedar Catholic - Cedar QB Tate Thoene completed 6 of 9 passes for 154 yards and 4 touchdowns in the Trojans 48-14 win over Ponca. Grant Arens grabbed 3 of Thoene’s completions for 101 yards, 2 of which were TD receptions (32, 41 yards). The remaining two scoring passes were gathered in by Jaxon Bernacker and covered 35, 13 yards.

Tate Thoene has 861 yards and 14 TDs through the air after 8 games with only one pick. Arens has caught 13 passes for 356 yards and 6 scores.

*Out of The Shadows Star Alert*

*Cam Kozeal-Millard South - Talk about coming through in the clutch, SLOTBACK Cam Kozeal moved to quarterback last week against Lincoln Northeast after star field general Gage Stenger hurt a hamstring against in Week 7. Kozeal, a 5-11, 185 pound junior with Division One Baseball offers from Vanderbilt, Aransas, Oregon State, North Carolina and Notre Dame, was money from the get go, completing 8 of 12 passes for 171 yards and 4 touchdowns, staking the Patriots to a 43-0 halftime advantage.

Kozeal did not play a down in the second half as Millard South went on to beat the Rockets 50-14 at Seacrest Field in Lincoln.

*Isaac Classen, Tanner Pfeifer-Humphrey St. Francis - Classen carried the mail 25 times for 158 yards, All-State QB Tanner Pfeifer completed 6 of 8 passes for 49 yards with a 14 yard scoring toss to Jaden Kosch in there. The Flyers star also scored three TDs on short blasts of 1, 4 and 6 yards. All this took place in St. Francis 38-6 win over Central Valley.

You want a real kick? Take in a St. Francis football game in the upcoming playoffs and watch the 6-2, 185 pound Pfeifer take the snap from center, turn around and toss the ball back to Classen, then assume the role of LEAD BLOCKER for Isaac, mowing down any and all defensive linemen and linebackers in his way.

*Cade Hosier-Elmwood-Murdock - Magnificent junior closed out the regular season in his normal high gear in the Knights 68-36 win over Cedar Bluffs. Hosier rushed for 137 yards and 2 touchdowns, caught 2 passes, both TDs, for 112 yards, returned a punt 70 yards for a score and a kickoff 77 yards for a house visit.

If Cade Hosier isn’t one of most versatile, all-around athletes in all of 8-Man football and beyond (Track and Field to be exact), he has to be close. Phenomenal talent.

*Riley Grieser-Kearney Catholic - Biz as usual for the Kearney Catholic 1000 yard rusher in the Stars 46-0 victory over Holdrege. Grieser reduced the Holdrege defense to “dust” with his 175 yards and 5 touchdowns on 16 totes. (Sorry, couldn’t resist the pun). The Stars senior sensation five TD gallops covered 55, 6, 4, 3 and uh, I don;t know about the last one. Riley’s 8 gamer rushing total is up to 1,246 yards (13 TDs) entering the regular season closer at Cozad.

*Jake Wemhoff, Paiton Hoefer-Elgin Public/Pope John - Junior classmates combined for 397 ground yards and five TDs in the Wolfpack’s 67-36 win over Osmond. Wemhoff now has 1,304 yards rushing in 8 games with 14 TDs, 206 receiving yards and 3 more scores, 1,675 All-Purpose yards and 76 tackles. You may just recall that Mr. Wemhoff had 1,030 yards rushing and 92 tackles a year ago as a sophomore. BALLER!

The Class D-1, 5-3 Elgin Public/Pope John crew opens the Holy Season with a very interesting opening round game at 7-1 O’Neill St. Marys bunch. This is an 8/9 matchup folks and things could get interesting with all eyes of the Nebraska 8-Man football world on this baby due to the 2 PM kickoff.

*Paxton Olson-Sutton - Senior continued his rushing rampage with 183 yards on just 9 carries and 3 TDs in the Mustangs 47-0 whitewash win over Gibbon. That swells Olson’s 8 game total to a whopping 1,419 yards with 18 touchdowns. This dude can Ball It!