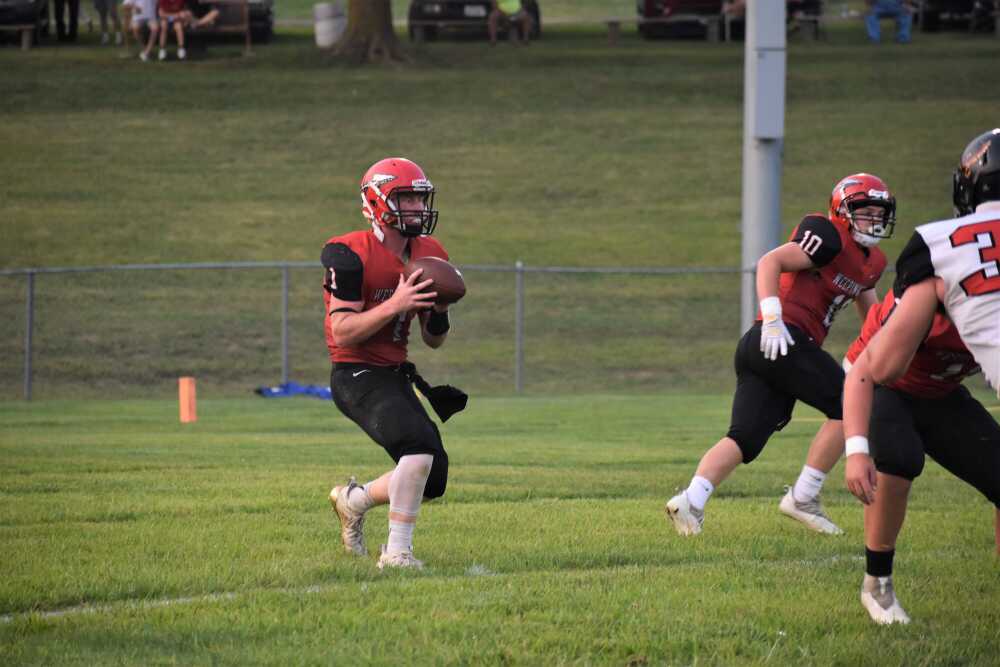 *Hunter Mortimer-Weeping Water - Remarkable Dual-Threat quarterback did major damage in less than two and half quarters work in the Indians 60-28 win over Palmyra. The fabulous Mortimer completed 7 of 9 passes for 131 yards and 4 touchdowns, exploded for 270 yards and 4 more scores on 30 carries and made a staggering 19 tackles (6-13-19) on defense.

*Rashad Madden-Ralston - The multi-talented Ralston senior finally found some room to run this season and eclipsed the Class B Single Game Rushing Record with his 412 yards in the Rams 49-32 win over Blair last Thursday night in Ralston. Madden’s 412 yards (30 carries/3 TDs) bettered the record of former Ralston great Isaac Wallace, who ran for 406 yards against Omaha Roncalli in 2013.

Madden now has 1,186 yards rushing this season in just SEVEN games, having missed one outing with an injury. The 5-9, 180 pound All-State candidate now has 2,926 career rushing yards (31 TDs) and a whopping 4,206 career All-Purpose yards with 32 touchdowns.

The 2-6 Rams close out their regular season at 1-7 Elkhorn Mt. Michael, so another Madden explosion is possible.

*Cole Ballard-Elkhorn South - The junior standout wasn’t messing around at UNK last Friday when the Storm turned back the Kearney Bearcats, 21-7. Ballard carried the ball 24 times for 172 yards and scored the final two scores of the game with runs of 1 and 4 yards. That lifts Ballard over the 1000 yard rushing mark (1,006/21 TDs) and once again makes the Storm a real threat to make a repeat appearance in the state Class A title game Tuesday, November 21st.

This young man is really a Special football talent.

*Blake Detamore-Doniphan-Trumbull - Senior RB/LB cracked the prodigious 1000 yard rushing mark with his 137 yards and 3 touchdowns on 31 carries in the Cardinals 29-7 win over a much improved Superior team. The hard charging senior also made 9 solo tackles on defense.

*Ryan Dixon-Auburn - Senior quarterback ran for 154 yards on just 9 carries (2 TDs) in the Bulldogs 67-12 win over Fairbury, vaulting him over the thousand yard rushing mark after 8 games. Dixon, who now has 1,117 yards on the ground (507 passing), has this Auburn team in a good position in the Class C-1 wild-card standings entering their regular season curtain closer at a 1-7 Falls City squad.

*Baylor Posten-NEBRASKA CITY - My prediction for this fantastic junior running back came to fruition as Posten eclipsed the 1000 yard rushing mark in the Pioneers 57-28 win over Falls City last week. Baylor escaped for 199 yards on 18 totes with 3 TDs, increasing his 2021 season rushing total to 1,041 yards.

Baylor Posten becomes just the 6th Neb. City back to crack that thousand yard rushing mark, the most recent one being Aaron Dicken back in 1994. Remember, the great Scott Porter still owns the school record there with his 1,426 yards in 1978.

Brown, who runs behind arguably the best offensive line in Class A, now has 1,162 yards rushing.

CharMar becomes the 25th Creighton Prep back to gain a thousand yards in a season, placing him in such august company with Jeff Wellwood, the late-great Stevie Hicks, Ryan Fisicaro, George Achola, Shane McClanahan and others.

West Point-Beemer, who is currently 2-6, closes out the regular season with 0-8 Schuyler.

*Devon Borchers-Columbus Scotus - It was “Play It Again, Sam” time for the Scotus flyer in the Shamrock’s 21-12 win over previously unbeaten Boone Central. Scotus, who is currently unbeaten themselves, turned Borchers loose for 166 hard earned yards on 18 totes and a touchdown. That elevated Devon over the 1000 yard rushing mark for the 2nd straight season, giving him 1,084 for the year after 8 games.

The Rocks will close out their regular season with a trip to The Hill to face rival Lakeview Friday.

*Carson Kudlacek-Hastings St. Cecilia - There is not much the 6-0, 165 pound junior quarterback cannot do for Coach Clint Head over there in the land of the Bluehawks. In last week’s 21-8 win over Sandy Creek, Kudlacek scored all three touchdowns and booted 2 of the three PATs, giving him 20 of the 21 points scored in the contest. The junior sensation ran for 113 yards on just 14 carries and those 3 scoring runs covering 13, 13 and 5 yards.

This kid is truly a field leader for the resurgent St. Cecilia football team, who has fashioned a 7-1 record with seven consecutive victories.

*Beau Ruskamp-Wisner-Pilger - Check this out. It took Wisner-Pilger star Beau Ruskamp just SEVEN touches of the football to ramble for 253 yards and touchdown runs of 50, 52, 63, 20 and 45 yards in the Gators 74-6 at Madison last Friday. In case you weren't doing the math, that averages out to 36 yards a carry, sports fans.

The big game also elevated the Gators 5-11, 150 senior quarterback over the 1000 yard rushing mark, putting him at 1,009 yards entering the Class D-1 playoffs.

Ruskamp and 4-4 Wisner-Pilger hit the road to face unbeaten Weeping Water in the opening round of those D-1 playoffs (7:00 kickoff)