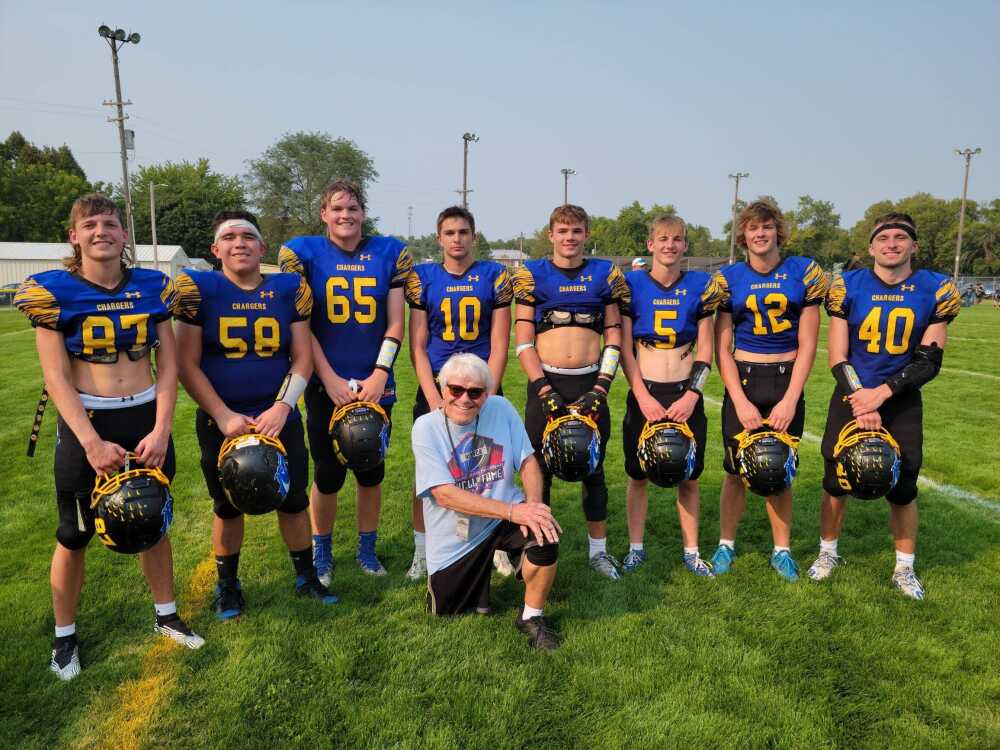 This is the 2021 Riverside Chargers offense that is averaging 64 points per game thus far in 2021. These gentlemen are good!

*Tony Berger, Chargers O-Line, D-Lines - Riverside - Tony Berger and the Riverside Chargers made it look easy Friday afternoon with their 61-6 triumph over a 2-0 Osmond team. The 5-11, 170 pound Berger, who placed 4th in the Long Jump and 3rd in the Triple Jump just over 3 months ago at the State Track Meet, played only one half of football, yet still managed 183 yards rushing with 5 touchdowns.

It took Berger just 20 carries to sprint for touchdown runs covering 32, 1, 34, 16 and 3 yards and that push up front by that Riverside side offensive line was just outstanding all afternoon despite the hot, humid temps.

Berger, who had a monster 101 tackles in 2020, looked terrific on defense, along with Trent Carraher and really, the entire bunch played awfully sharp all day.

As far as Tony Berger’s unofficial 3 game rushing total? I have 441 yards with 9 touchdowns.

I’ll get to see this team again next Friday afternoon at Central Valley and again in Spalding when the Chargers entertain Humphrey St. Francis. And a couple of other things to remember about Cory Valasek’s current football team.

Tony Berger booted all but two kickoffs into the endzone for touchbacks in that Osmond win, so more likely than not, Riverside’s remaining opponents will be starting the majority offensive drives on their own 15 yard line.

The second thing, or PLAYER to keep in mind, is freshman Jack Molt, who is one of the fastest freshman in Nebraska, having pulled off 2nd, 3rd and 3rd places respectively in the 200, 100 meter dashes, and 100 meter hurdles at the State Middle School Track Meet in Gothenburg in Mid May as an 8th GRADER.

Jack Molt will be one of the deadliest return men in 8-Man football before this season is over.

*Caleb Busch-Burwell - Busch, last year’s Nebraska high school football state rushing champ, absolutely exploded for a massive 407 yards on 35 carries and 8 touchdowns in the Longhorns 55-12 win over Aiden Kuester and the Neligh-Oakdale Warriors. The ultrasonic Busch ran for touchdowns covering 50, 53, 19, 3, 11, 73, 5 and 59 yards in that impressive win in Neligh.

The 407 yards and 8 TDs in one game were more than Caleb’s previous two games of the 2021 season combined, yet didn’t surprise many given the young man’s superb talents.

The 407 rushing yards also pushed Caleb’s 3 game 2021 total to 764 yards with 16 TDs and swelled his career rushing total to 4,210 yards with 84 touchdowns. Think about how solid that offensive line of the Longhorns must be and I know just the man to ask about that……….Oh, his number is 16 by the way.

*Mccoy Holtam-Omaha Skutt Catholic - 6-1, 190 pound junior broke loose for 151 yards on 16 carries and 5 big touchdowns in the Skutt’s 55-27 win over Omaha Gross last Thursday. Holtam, who was mentioned to me by the one and only Bob Jensen, reeled off scoring runs covering 2, 17, 2, 28 and 2 yards, the middle three being keys in the SkyHawks pulling away from Cougars in the 3rd/4th quarters.

Wyoming pledge Caden Becker was a perfect 4-4 passing for 127 yards, which included a 16 yard scoring toss to Brandt Pickrell. Although being caught on the Gross 2 yard line following a 92 yard kick return, James Sengstock’s long spring helped break open a close game (21-14) in the 2nd stanza.

The big one comes this week when Skutt Catholic and Bennington clash Friday night in Bennington.

*Koa McIntyre, Kade McIntyre, Gavin Logemann-Fremont Bergan - Wyoming pledge Koa McIntyre completed 11 of 20 passes for 268 yards and 4 TDs in the Knights 45-25 win over Lincoln Lutheran. Koa added 48 yards on the ground on 9 carries, which included a 2 yard score. The senior All-State selection also picked off a Warrior’s pass and returned for a 55 yard pick-six.

Koa’s younger brother Kade hauled in 4 of his older bro’s aerials for a whopping 172 yards and a pair of touchdowns, while Gavin Logemann hauled in 3 of Koa’s throws, good for 35 yards and two more touchdowns.

The fantastic Koa McIntyre, incidentally is nearing the 5,000 yard career total yards mark, currently sitting at 4,890 big ones. It’s not difficult to figure out why Wyoming is sold on this young man with his 2,793 career passing yards (40 TDs), 1,919 rushing yards with another 26 scores and 178 receiving yards (2 TDs).

If not on offense, Koa McIntyre could probably be effective on defense at Wyoming as well. Lest we forget, he has 115 career stops, 73 being solos, three pick-sixes (2 already this year), and 8 total interceptions during his 36 game career at Archbishop Bergan.

You get the picture and that Koa a huge reason Bergan is currently C-2’s number 1 ranked football team.

Both Johannsen and Kaelin threw scoring passes to junior Tk Barnett, who had 4 receptions for 117 yards. On defense, it was the great Jayden Roberts once again leading the T-Bird “D” with 11 tackles. Preston Ames added 9 stops and recovered a fumble in the win over Prep.

Richardson, who has 570 yards after 3 games, trails Millard West star Nate Pederson, who despite being held to 59 yards rushing by Millard South last week, still leads the Big Boy class with 631 yards.

*Max Buettenbach-Lincoln Southeast - The 185 pound junior logged his 3rd straight 100+ rushing game in the Knights 17-7 win at Grand Island. The hard charging Buettenback rushed 30 times for 145 yards against the Islanders, which was actually his lowest output this season. Buettenback is a sensational runner who can get to the edge on sweeps and continuously drags defenders for yards after contact. LOTS of yards after contact.

Buettenback has 491 yards and 4 touchdowns in just 3 games for the unbeaten and 4th ranked Knights.

*Jack Wemhoff-Elgin Public/Pope John - Junior sensation ripped the High Plains defense for 357 yards on 39 touches with a pair of touchdowns in the Wolfpack’s 66-36 win over the Storm. The 5-9, 155 pound captain also caught a 13 yard scoring pass from junior classmate Paiton Hoefer, who completed 5 of 8 passes for 117 yards. Four of Hoefer’s aerials were good for TDs, two going to senior Colton Wright, the remaining scoring toss to sophomore Blake Henn. Hoefer also ran for 61 yards and a pair of scores in the win.

*Noah Walters-Lincoln East - All-State candidate was a shining star in the Spartans 56-7 win over Norfolk. Walters connected on 12 of his 20 passing attempts for 251 yards and 5 touchdowns. Two of Walters' scoring passes were caught by Cooper Erikson, while Malachi Coleman caught a 65 yard scoring toss. Billie Stevenson and Luke Greisen also had TD receptions in the Lincoln East route.

The gunslinging Walters has already thrown for 819 yards with 11 touchdowns and just a single pick. The Lincoln East star now has 4,369 career passing yards with 48 touchdowns and a 58% completion rate. If you will recall, Noah Walters passed for 2,753 yards and 28 TDs a year ago.

*Brodey Johnson-North Bend Central - 6-2, 195 senior quarterback completed 23 of 30 passes for 359 yards and 3 touchdowns in the Tigers 76-32 loss to Pierce. Johnson, who can really fling the football with a quick, sharp release, also ran the ball three times for 51 yards and a TD.

Brodey Johnson has 737 passing yards after three games for the 0-3 Tigers and has to be asking himself “what do I have to do in order for North Bend to hit the win column?”

*Becker Pohlman, Parker Krusemark-Stanton - Just when Stanton opponents thought they were rid of a running back named “Pohlman”, as in Sutton Pohlman, along comes 5-8, 185 pound freshman Becker Pohlman. All Becker did last week was rush 6 times for 121 yards and 3 TDs, return a kickoff 46 yards for another score and log three tackles on defense in Stanton’s 81-50 win over Wakefield.

In fact, TEN different Stanton backs carried the ball at least once for a total of 382 rushing yards in the win. Another Freshman, Barrett Wilke, caught a 65 yard TD pass and also returned a kickoff for a touchdown in the game, while yet ANOTHER freshman, Jordan Claussen led the Mustangs rushing game with 79 yards (11 carries).

Senior All-State QB candidate Parker Krusemark was 9 of 17 passing for 200 yards and a score. He also rushed 8 times for 64 yards and a 15 yard touchdown, made 4 tackles on defense and picked off a Wakefield pass.

D-1/#7 Stanton is now 3-0 and set for a head-on clash with Clarkson-Leigh this Friday.

*Jackson Roberts-North Platte St. Pats - Remarkable sophomore running back rushed for 164 yards and three touchdowns in the Irish 35-0 win at home over previously unbeaten Centura. The game was scoreless at halftime before the St. Pats started rolling in the 2nd half.

I will finally get an opportunity to see this amazing young man live right in my backyard when the Irish play at GICC Friday. Cannot wait!

*Landon Classen-O’Neill - Junior QB had a terrific performance, despite the Eagles dropping a 49-26 decision to Central City. The 160 pound dynamo ran for 106 yards and touchdowns covering 1, 1 and 12 yards, completed 10 of 17 passes for 100 yards and made 13 solo tackles on defense.

In last week’s 37-7 win over Valentine, Classen completed 11-15 passes for 222 yards and a pair of TD’s, rushed for an additional 54 yards and 2 more scores and made 4 stops on defense.

This kid is good, friends.

*Isaiah Zelasney-Osceola - Class D 100/200/400 meter champion rallied his Bulldog forces from a 42-36 3rd quarter deficit to a 60-42 win over a very good Mead squad last Friday. The Osceola junior, who did not play a week ago due to a leg injury, ended up rushing 19 times for 207 yards and 5 touchdowns in the win.

Zelasney, who has 536 yards and 9 TDs in just two games, will take his talents to Fullerton this Friday to test the Warrior defense.

*Riley Grieser, Brett Mahony-Kearney Catholic - 190 pound senior Riley Greiser ran 22 times for 125 yards, caught a 15 yard touchdown pass and made 4 stops on defense in the Stars hard earned 14-7 victory over tough St. Paul. Meanwhile, quarterback Brett Mahony was busy completing 13 of 20 passes for 139 yards and a pair of scores in the win.