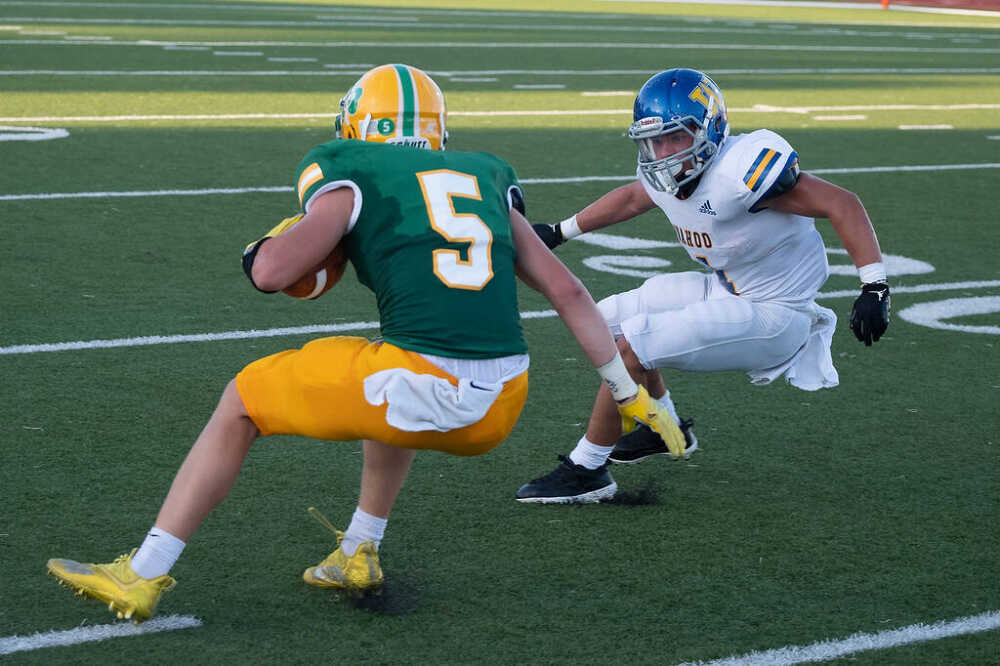 Columbus Scotus running back star Devon Borchers hits the skids prior to changing directions in the Shamrocks 31-14 win over powerful Wahoo. *(photo courtesy of Brent Schumacher)

*Aiden Kuester-Neligh-Oakdale - The junior phenom was simply outstanding in the Warriors 74-32 victory over Plainview. The All-State QB hit 10 of 14 passes for a whopping 309 yards which included FIVE touchdown passes to FIVE different receivers. Remember, this is 8-Man football, friends.

On defense, Kuester has 179 career tackles, 4 interceptions (including a Pick 6 last year) and a pair of blocked punts. Aiden also was a state wrestling champion (160 pounds, Class D) as a sophomore after finishing 3rd (152) as a freshman. Kuester also vaulted 13 feet at the State Track Meet this past May, just missing a place.

*Trevor Thomson-Summerland - Junior All-State candidate racked up 194 yards on 24 carries with TD runs of 56. 37 yards in the Bobcats 38-23 loss to Class D-2, #3 O’Neill St. Marys. The speedy Thomson also made 9 tackles on defense and increased his rushing total to 374 yards in two games.

Thomson gained 1,226 yards a year ago in Summerland’s first season as a combination of Cleawater, Ewing and Orchard schools. I think running for 1,226 yards for a 2-6 football program in its first year of existence is really an accomplishment.

*Christian Meneses, Blue Devils “D”-Plattsmouth - Meneses exploded for 300 yards rushing and 5 touchdowns on 25 carries in Plattsmouths 55-7 trouncing of Ralston. Meneses touchdown runs covered 24, 27, 4, 6, and 6 yards. After just two games, Christian is up to 451 yards (7 TDs) after rambling for 1,740 yards a year ago as a junior.

The Blue Devils defense was stout in the Ralston game, limiting the Rams to just 9 yards passing and 137 on the ground. A week ago in their 28-7 win over always tough Blair, the Blue Devils defense held the Bears to 216 total yards. Plattsmouth may also have the best linebacking corps in Class B, PLUS returning All-State safety Owen Prince to boot.

*Drew Knust, Carlos Collazo, Mack Owens, Carsen Staehr, Koby Nachtigal, Kyle Peterson-Aurora - Knust, the gutty 170 junior quarterback, completed 15 of 23 passes for 153 yards and 2 TDs, rushed 11 times for 73 yards and bolted for first downs when the Huskies needed them the most. Carlos Collazo took over the bulk of the running back duties after Mack Owens was relegated to play defense during the middle two quarters.

Collazo scored THREE HUGE touchdowns in the game. The first, an opening drive 4 yard screen pass catch that gave Aurroa an 8-0 lead. The second, a 17 yard run that pulled Aurora within 21-14 with 5:04 left in the 2nd. The other was a highlight reel 19 yard screen pass reception that lifted the Huskies to within 48-44 with 3:30 left in the 4th. Carlos finished with 53 yards on 12 touches and those two scoring pass receptions.

Mack Owens, despite limited action on offense, still powered his way for 56 yards on a dozen carries and a 5 yard TD ramble.

And then there are the special teams touchdowns that sent shockwaves up and down the Bennington sideline. First, the electrifying, momentum changing 93 yard kick return by Koby Nachtigal with NO TIME remaining on clock before halftime and Bennington leading 35-14. The second killer was the Johnny Rogers-like 72 yard punt return by speedy, elusive Carsen Staehr with Bennington up 42-30 early in the 3rd quarter.

And finally a HUGE salute to Aurora head coach Kyle Peterson for calling for an onside kick to start the game and keeping the Badger coaching staff on pins and needles all evening with his fearless, magical offensive calls.

Senior Kieshawn Porter caught a 30 yard scoring strike from Flere, one of his 8 receptions for 134 yards on the night. Klere’s classmate, sophomore TeShaun Porter, bolted for 138 yards on 24 carries, which included a sparkling 74 yard touchdown sprint by the speedy Porter.

The sophomore blazer nearly broke another long one but was dragged down by the last Westside defender after a nice 26 yard gain.

Larry Martin has assembled a talented young team that will only improve as the season progresses. Any team that plays like that against Omaha Westside is going to go places in 2021. Despite losing to the Warriors, Omaha North outgained Westside 387 to 278 in the contest.

*Kolby Brown, Dom Rezac, Grant Guyette-Omaha Westside - And…..here is how you win a game despite being outyarded by over a hundred yards. You have Kolby Brown complete 13 of 19 passes for 167 yards and two touchdowns, give the ball to Dominic Rezac 16 times and have him run for 84 yards and a 7 yard touchdown, and have Guyette catch both of Brown’s scoring tosses (5, 15 yards) and finish the win with 7 catches for 90 yards.

You also drop Dom Rezac back to receive a punt and watch him take it to the house from 89 yards away. And…...that’s how you beat Omaha North despite being outgained by over a hundred yards. Simple as that.

*Vince Genatone-North Platte- 6-1, 210 pound speed demon ran for 137 yards and two touchdowns on just 9 carries in the Bulldogs 34-0 win over Fremont. Genatone, who owns FIVE Division One offers, also made 12 tackles on defense in the Platters big “W”.

Junior Kaleb Kincade also registered 12 tackles while fellow junior Matthew Musselman added 11 stops. Kincade (2) and Genatone (1) each had sacks in the contest while Ryan Kaminski enjoyed a 90 yard Pick 6 against the Tigers.

*Blake Miller-Nebraska City Lourdes - The Lourdes Central Catholic star was at it again in the Knights 69-32 win over Guardian Angels CC. Miller completed 13 of 20 passes for 185 yards and 2 TDs, rushed 13 times for 164 yards and another 3 scores and brought a punt back to the house from 48 yards out.

Blake’s touchdown tosses were reeled in by Zach Tesarek (46 yds), and Beau Lee (14 yds). Lee led the Lourdes receivers with 4 catches for 80 yards. On defense it was senior Will Funke registering 14 stops. Joe Kearney added 6 tackles while Vance Weninger, Aiden Aldana and Michael Biquette all chipped in with 5 stops each.

Lourdes Central Catholic is currently ranked #6 in Class D-1 by the World-Herald and will visit the same Johnson-Brock team Friday that halted the BDS 50 game regular season winning streak last week in Shickley.

*Tanner Simdorn-Centura - Gritty 6-1, 195 pound senior QB/ILB was a standout in the Centurions 27-0 win over visiting Bridgeport last Friday afternoon north of Cairo. NE. Simdorm, a true field general and coach ON the football field, rushed for 85 yards and a pair of scores, completed 3-5 passes for 42 yards and yet another touchdown, and was all over the field on defense, recording 14 tackles with 10 solo stops, 3 TFL and also probably devised a game plan for this week’s game at North Platte St. Pats when he wasn’t busy doing all those other things

Tanner Simdorn is just another one of those tough Centura football figures we’ve come to know over the years and the dude absolutely knows how to operate that slick Bart Kron Flex-Bone to a Tee.

*Brady Fitzpatrick-Papillion LV South - Junior quarterback threw for 140 yards and 2 touchdowns, plus ran for another 140 yards on 19 touches and a score in the Titans 32-28 upset win over Lincoln East. Devyn Jones and Ian Medick were the recipients of Fitzpatrick’s touchdown tosses, while Jimmy Rosenthal was a demon on defense, recording 9 tackles, 3 sacks and an interception. The Titans sacked Lincoln East All-State QB Noah Walters 6 times during the game.

*Landon Johnson-Lutheran High NE - Sophomore quarterback was once again a shining star in the most recent Eagles win (30-26) over West Holt. In Week One, everyone will recall that Johnson went 14 for 14 for 279 yards and EIGHT Touchdowns in Lutheran High NE’s 74-6 trouncing of Madison.

Last Friday was a nail biter against Atkinson West Holt though, but Johnson came through by running for 165 yards on 24 totes with TD runs of 30, 23 and 15 yards. No, Landon Johnson didn’t throw 8 scoring passes, but he did complete an efficient 5 of 10 aerials, good for 152 yards.

On the defensive side, Cort McKeown had 9 tackles and 2 INTs, while Johan Rojas made 11 tackles.

*Bryce Schmidt, Coyotes Defense-Anselmo-Merna - Schmidt ran for 145 yards and 3 touchdowns on just 9 carries in the Coyotes 100-6 over Hemingford. The Anselmo-Merna defense held Hemingford to just 6 yards of total offense in the blowout win. 21 different players also registered tackles for the Coyotes in the contest.

*Blake Detamore-Doniphan-Trumbull - Senior stud ran 26 times for 201 yards and 4 touchdowns in the Cardinals nail-biting 24-20 over Gibbon. Detamore also caught a pair of passes for 12 yards and made 7 solo tackles on defense.

*Riley Sudbeck, Jake Peitz-Hartington/Newcastle - Sometimes you can pile up the stats but still wind up on the losing end of a lopsided score, as was the case in Hartington/Newcastle’s 64-23 loss to Humphrey/Lindsay Holy Family. The Sudbeck to Peitz pass/catch combination worked for 202 yards and a pair of scores, with the sophomore Sudbeck completing 12 of 16 aerials for 229 yards and three TDs.

Peitz, the senior, had 202 of those yards and a pair of scoring receptions. Sometimes the game just doesn’t seem fair, right Corey?

*Isaac Classen-Humphrey St. Francis - In typical St. Francis fashion, Classen carried the ball just 4 times for 69 yards in the Flyers 68-6 win over Emerson-Hubbard, but THREE of those went for touchdowns on runs of 39, 7 and 23 yards. Classen also threw a 9 yard TD pass to All-State QB Tanner Pfeiffer.

*Cade Hosier-Elmwood-Murdock - Ran for 196 yards and long distance touchdown scampers of 50 and 73 yards in a 46-24 loss to Clarkson-Leigh. Hosier already has 558 yards rushing after two games in 2021.

*Dillon Christensen-Garden County - The 5-10, 145 pound back rushed for 202 yards on 26 carries and 3 touchdowns, caught three passes for 57 yards and another score, went 1 for 1 passing, had 56 kick return yards, 23 punt return yards, worked the concession stand at halftime and played in the band before the game. Otherwise, it was a boring night for Christensen in Garden’s exciting 44-38 win over Sutherland.

Okay, okay, I’m not sure about the concession stand and the band thing, but I can vouch for the other stats.

*Jared Anton-Potter-Dix - 129 yards on just 8 carries and 2 touchdowns with 9 stops on defense in the Coyotes 62-6 win over Sioux County.

*Anthony Kling-Pawnee City - FRESHMAN ran 9 times for 103 yards and 2 TDs, caught a 30 yard scoring pass and led the team in tackles (7) in Pawnee’s 76-6 win over Dorchester.