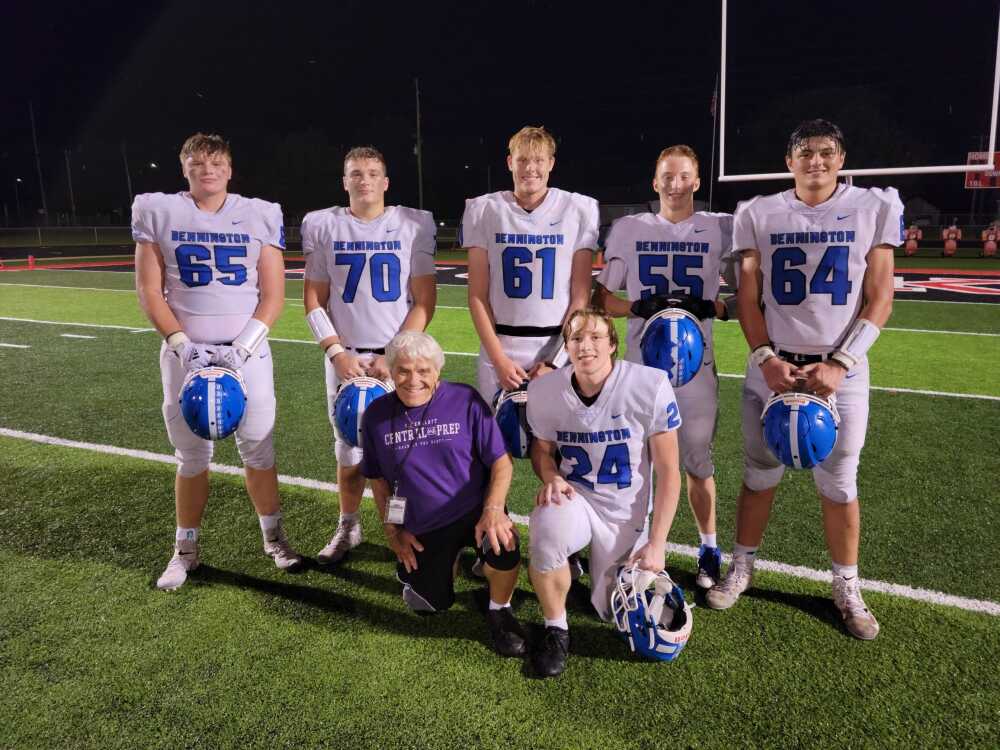 That is Bennington RB Dylan Mostek kneeling next to me in the front row. Mr. Mostek leads the Nation in Rushing Yards per Game right now. In the back row (L-R) #65 Jameson Krayneski, #70 All-Stater Jake Stier, #61 Cody Harris, #55 Nate Schaefer and #65 Carter Lerch. In my opinion, Mostek and this BADger offensive line are the best in Class B right now. *(photo shot by Tony Chapman)

*Dylan Mostek, Trey Bird, BADger Offensive Line - The remarkable Mostek blazed for 353 yards rushing yards, Bird threw for 201 more and the finest offensive line in Class B made things easier against a fine Aurora squad in the BADgers 55-44 slugfest win over the Huskies. Mostek, who leads the entire nation in Rushing Yards Per Game (354), toted the football 39 times and once again ripped off long scoring runs covering 53, 56, 48, 3, 54 yards. Dylan has 704 rushing yards after just two outings.

Bird’s passing numbers looked like this; 16 of 24 for 210 yards and touchdown tosses to Mitchell Anderson and the great Cayden Bluhm, who had 8 catches for 89 yards.

On the defensive side, Austin Holtz made 11 tackles, Connor Brecht wasn’t far behind with 10, and both Anderson and junior Owen Douglas had interceptions.

It was just a week ago that Pederson ran 35 times for 248 yards and scored all three Millard West touchdowns in a 35-21 loss to Elkhorn South. That’s 572 yards and 7 TDs in two weeks by the Wildcat senior, who ran for 951 yards in 2020 for Kirk Peterson’s squad.

*Trevin Wendt-Pleasanton - Junior standout zipped for 256 yards on 20 carries and TD runs of 47, 48, 44, 27 yards in the Bulldogs hard-fought 34-14 win over a pesky Axtell team. Wednt also caught a pair of passes for 62 yards and made 10 stops on defense. Wendt’s pal Chase Pawloski led the defense with 11.5 stops and 2.5 tackles for losses.

Wendt, by the way, has one of the biggest yards/per/carry in the state with his 13.9 stat. The dude has only carried the ball 29 times, yet has bolted for 402 yards and 7 TDs in Pleasanton’s first two contests. Trevin Wendt is a special player.

Flores, who has thrown for 3,299 career yards, tossed a 40 yard scoring stroke to classmate Joe Roll in the game.

*Braeden Stull, Sebastien Boyle, Chance Symons-Scottsbluff - 6-3, 175 Bridgeport transfer Braeden Stull completed 7 of 9 passes for 210 yards and a touchdown in the ‘Cats 40-0 win on the road at Hastings. Stull also ran for 57 yards on 13 carries and two more TDs. Braeden’s favorite was big 6-4, 215 pound TE Trevor Schwartz, who gathered in 5 receptions for 124 yards and a score.

Speedy sophomore Sebastien rushed 21 times for 137 yards and two touchdowns for the victorious Bearcats. One 29 yard scoring dash was especially impressive for the sophomore. He was nearly stopped at the line of scrimmage, but the sophomore regained his balance and continued his 29 yard TD dash.

All-State candidate Chance Symons was his usual self on defense, making 8 tackles and causing havoc on many plays.

*Ryan Dixon-Auburn - Senior back exploded for 271 yards on 21 carries and reached the end zone with runs of 5, 66 and 58 yards in the Bulldogs 28-6 win over Fort Calhoun.

*LJ Richardson, Luke Johannsen-Bellevue West - Richardson darted for 227 yards on just 9 carries with TD scampers of 81, 2, 3 and 61 yards, as the Men in Purple punished Bellevue East 59-0. QB Luke Johannsen was also brief and efficient, connecting on 7 of 9 passes for 61 yards and a pair of scores.

Backup quarterback Daniel Kaelin came in to hit 7 of 13 aerials for 83 yards. Both Division One TE recruits, Kaden Helms and Micah Riley-Ducker each hauled in TD passes in the contest.

*Brady Cook, Fletcher Dubas, Brett Bridger-Fullerton - In the Warriors 48-30 win over CWC; Brady Cook blasted his way for 159 yards on 24 carries and 4 TDs. Freshman QB Fletcher Dubas completed 12 of 26 passes for 135 yards and a score and also rushed 15 times for 64 yards, and check this out.

6-0, 190 pound sophomore Brett Bridger made NINE tackles, ALL for losses including FIVE sacks. Mother of Mercy!

The young Warriors, who have just one senior on the squad, are now 2-0 and ranked #6 by Omaha World-Herald. I really love this football team.

*Isaac Kracl, Braden Schmeckpeper-Crete - Punished McCook with his 176 yards on 31 touches and 2 touchdowns in the Cardinals 24-14 win over McCook. The fleet footed 175 pound senior scored on runs of 1 and 10 yards and also broke free for a 72 yard punt return score in the game. Kracl added 6 tackles on defense to shine on that side of the ball as well.

Quarterback Braden Schmeckpeper, Kracl’s senior classmate, completed all 5 of his pass attempts (46 yds) and added 84 rushing yards on 10 carries in the Crete win.

It was a sweet win for Crete, who rarely plays McCook in the regular season. The teams have met just 3 times in the 21st century (all in the playoffs) with Crete’s last win coming in the 2006 Class B semifinals, 28-7. The Cardinals would, of course, go on to win the Class B championship that year with a 28-14 win over Elkhorn.

Isaac Kracl has 395 rushing yards in just a pair of games this season.

*Dylan Higby-Clarkson-Leigh - 5-8, 150 pound sophomore galloped for 210 yards on 16 carries with touchdown runs of 10, 46, 65 and 29 yards in the Patriots dominating 46-24 win over a nice Elmwood-Murdock team. That Clarkson-Leigh “D” was mighty tough all night, especially in the first half when the Patriots bolted to a commanding 46-8 lead at the break.

Kanyon Held led that defense with 13 tackles (5 solos, 8 assists), both Mitchel Beeson and Drew Beeson added 12 stops each, Mason Whitmore chipped in 8 more and all-state candidate Carter Hanel made 7 tackles, 3 TFL, one of which was a sack.

This is a GOOD football team folks and it appears one of their best players, Eli Hayes, had a quiet game vs. Elmwood-Murdock, so think of how good this bunch is with Hayes contributing big time.

In the Chants surprisingly easy 55-7 win over Central City, Hurlburt rushed the ball 20 times for a monster 220 yards and 4 touchdowns (three were from 7, 8 and 76 yards out). Hurlburt was also 7 of 8 passing with 76 yards. Racek meanwhile, raced for 163 yards on 16 totes and 3 more touchdowns.

FOUR Ord defenders picked off Central City passes in the game with a pair of sophomores responsible for 3 of those. Talon Bruha, matter of fact, had 2 picks while classmate Trent McCain had one. Senior John Deriso pirated the other Kyle Jensen Aerial.

Hurlburt’s two game totals are impressive. 13 of 14 passing for 185 yards/3 TDs and 383 rushing yards on just 31 touches with 7 TDs and just think, the dude will be around for the next two years following this one!

*Caleb Fossenbarger, Hunter Gravatt-Johnson-Brock - Fossenbarger completed 15 of 24 passes for 131 yards and ONE HUGE touchdown. That touchdown, coming with 0:00 on the clock, ended a 50 game regular season winning streak by BDS.

Fossenbarger took his Johnson-Brock nearly the length of the field in the final minute of the game, then hit Gravatt for the score. Fossenbarger then completed a pass for the double PAT and the Eagles were 32-30 winners over BDS in Shickley on a Friday afternoon.

*Brett Mahony, -Kearney Catholic - Two-time All-State basketball star can play a little quarterback too. In the Stars 38-7 victory over Gothenburg, Mahony completed 7 of 10 passes for 185 yards and 3 touchdowns. The senior standout also ran 7 times for 50 yards which included a 1 yard scoring run. Mahony would have recorded a 48 yard touchdown scamper had he not been run down at the Gothenburg one yard line by Wes Kozeal.

.Mahony’s scoring receptions were gathered in by Riley Grieser (80 yards), Mason Mandernoch (39 yards) and a 16 yarder to Kade Velmer.

*Luke Carritt-Mead - Senior signal caller completed 15 of his 23 passes for 233 yards and 3 touchdowns in Meads big 38-26 win over Allen. Two of the scoring passes were gathered in by big Tight End AJ Carritt (older bro?). The remaining TD reception went to Tyler Pickworth.

And talk about having a HUGE game of defense, how about Luke’s classmate, powerful 190 Beau LaCroix? The Mead Destroyer made 18 tackles, which included 9 solo stops.