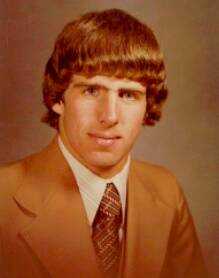 Adams star Eugene Busboom, who played his TE/LB positions back in the late 1970's at 6-3, 170 pounds and doninated.

From 1974 to 1977, Gene dominated on both sides of the line of scrimmage for the Hornets and legendary Hall of Fame Coach Ken Cook. His dominance as both a tight end and middle linebacker helped carry those Adams teams to four consecutive undefeated seasons and multiple state titles. Gene was also a key player that helped his team set a state record (at the time) with an historic 43 game winning streak. He finished each of his four high school football seasons on the number one ranked team in the state and was instrumental in helping Coach Cook build the premier 8-Man Football dynasty of the 1970’s. Gene never lost a game in his prep career and was selected 1st Team All-Conference and 1st Team All-State on several occasions. He was also named the 1977 8-Man Player of the Year and after his senior season, he was invited to play in the very first Eight Man All-Star Game in 1978. Gene later finished his football career playing at Doane College. In the mid-2000’s, his son Ryan followed in Dad’s footsteps by also being honored as an 8-Man All-State player for (Adams) Freeman High School. The NEMFCA is honored to welcome Gene into the Eight Man Football Hall of Fame Class of 2020-2021.

“Eugene Busboom….Wow! Between him and Trevor Havlovic (East Butler2016/17) those are the best hands I saw in 8-Man football. In 1977 the 6-3, 170 pound Adams senior star caught 42 passes for 844 yards for an offense that primarily ran the football. Like Havlovic, Busboom was a ferocious linebacker for Hall of Fame super coach Ken Cook who made 102 crunching tackles his senior campaign and left no doubt who called the shots when Adams was on defense.

When a player like Eugene Busboom sticks out in your memory for the past 40 some years, the dude must have been special. And speaking of special, after Cookie (Ken Cook) won that 1977 Class D 8-Man football title, his career record improved to 81-5-1. You read that correctly.

And then you wonder why I call Coach Ken Cook “God I” and Coach Doug Goltz “God II”.

At any rate, Eugene Busboom was a MAN when he roamed the gridiron back in the late ‘70’s. When most of us in this era think about an all-star tight end/linebacker, we are talking a 6-3, 215-220 pounder.

Busboom got the job done and was a man among boys at 170 pounds and that’s why he will be forever enshrined in the NEMFCA Hall of Fame come Saturday evening.