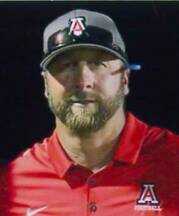 Chris Darnell, one of Falls City Sacred Heart's best ever.

From 1989 to 1992, Chris was a standout player for Sacred Heart and Hall of Fame Coach Doug Goltz. He was never on the losing side of the scoreboard during the entirety of his high school career (51-0), and in the process played part in 4 consecutive state championships for the Irish. During that span, Chris was honored on multiple occasions, including being named 1st Team All-Conference 4 times, 1st Team All-State on 3 occasions, and the multi-sport athlete of the year for 1993.

Darnell finished his high school career by winning 4 state titles in football, 3 in track, and 2 in basketball. In the summer of 1993, he was selected to play in the Nebraska Shrine Bowl and was also named the most valuable offensive player of the Eight Man All-Star Game.

Chris then went on to play college football at Northern Colorado University and Peru State College. The NEMFCA is honored to welcome him into the Eight Man Football Hall of Fame Class of 2020-21.

My thoughts on Chris Darnell: I swear Chris Darnell was sent by the gods to come through in big games for Falls City Sacred Heart. When Darnell took over the quarterbacking duties his junior season for the graduated Kent Knobbe, head coach Doug Goltz knew he had a winner from the get-go.

Darnell led the Irish through an undefeated 1991 season and came through when it mattered in the state Class D-2 semifinals with Sacred Heart trailing Bancroft-Rosalie 20-8 at halftime. Darnell’s third quarter 45 yard punt return touchdown sparked a comeback rally that resulted in a 36-26 win over the Panthers.

His senior season was even more impressive, as Sacred Heart set a state record for consecutive wins by hitting the 51 mark after their 44-14 muddy field win over a good Sumner-Eddyville-Miller team.

Once again, Chris came through when it mattered most in that 1992 D-2 Final. The papers stated “Darnell nearly sat out the championship game with a SORE SHOULDER, but this old guy thinks it was a little more than a sore shoulder. I have reason to believe Darnell played that entire game with a separated shoulder on his throwing arm and STILL came through like a shining star.

In that SEM win, Chris bolted for 166 yards on 16 carries and his 2nd quarter touchdown dashes of 48 and 64 yards broke open a close game at the time. And consider this. Darnell, who had 1,161 yards rushing coming into the championship game, had TWO other 1000 yard rushers in the backfield and could have leaned on them early on.

Darnell DID actually decide to lean on sophomore fullback Chris Carpenter in the contest. A Master of Trickery on the read option, Chris fed the ball to young Carpenter, who then exploded for 223 yards and 3 touchdowns of his own, resulting in the 44-14 conquest.

Chris Darnell’s senior stats: 1,327 yards rushing, 36 of 57 passes completed for an additional 524 yards, as Falls City Sacred Heart extended their state record of consecutive wins to an amazing 51 in a row.

Oh, and that’s not all. Darnell’s decision to lean on Chris Carpenter in that championship game vaulted Carpenter over the 1000 yard rushing mark, adding his name to a backfield that already contained thousand yarders Chris Darnell (1,327) and Nate Froeschl (1,059).

That made the 1992 Irish backfield only the 2nd backfield in history to have three one thousand yard rushers. Marquette had pulled it off in 1983 with Lynn Menke, Ken Russell and Kevin Hutsell.

This is precisely why Hall of Fame coach Doug Goltz made the statement that Chris Darnell was one of the most competitive athletes he has ever coached.

I wholeheartedly agree and that is the reason Chris Darnell, now a coach at Auburn high school, produced a son (Baily) who ended up being a two time 1000 yard rusher for Auburn and another son Brody, who was a standout quarterback this past season with 834 passing yards and 805 rushing despite playing in only 9 games. Brody was also a standout linebacker and kicker for last year’s Bulldog C-1 quarterfinals squad.

CHRIS DARNELL, an easy choice for the NEMFCA Eight Man Football Hall of Fame Class of 2020-21.