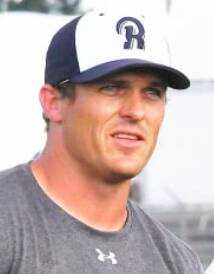 St. Edward football/track star Andrew Shanle, who later was a defensive standout for Nebraska and an NFL player for the Chicago Bears and 2007 Super Bowl Champion New York Giants. Who says 8-Man football players can't play in the NFL. The St. Ed Beavers have a pair of Shanle boys to prove that is indeed possible.

Often great things come in pairs and such is the case of those legendary Shanle boys from St. Edward high school. We previously honored Scott Shanle, now let’s turn on the spotlight for younger brother Andrew.

In high school, Andrew was an outstanding player for the Beavers and was selected 1st Team All-Area and 1st Team All-State multiple times as both a quarterback and defensive back. He finished his prep career with over 3,000 yards passing while adding nearly 2,000 yards rushing and over 80 total touchdowns.

Andrew had a senior season to remember as the well chiseled, speedy St. Edward quarterback threw for over 1,400 yards, while rushing for an additional 835. Shanle was also a defensive standout, making 90 tackles and pirating 7 passes from his safety position.

Andrew also grabbed a pair of second place medals at the State Track Meet in the 100 and 200 as a junior and won the 100 as a senior. Shanle reeled off a :10.5 hundred meter dash in a meet his senior season.

After graduation, he was then selected to play in both the 2002 Shrine Bowl and the Eight Man All-Star Game. From 2002 to 2007, Andrew moved on to a stand-out career as a defensive back for the University of Nebraska where he became a three-time 1st Team Academic All-Big 12 player and a member of the renowned “Blackshirt” Defense.

After college, he signed with the NFL’s Chicago Bears and later with the New York Giants (where he was a member of the 2008 Super Bowl XLII (42) Champions). As a Cornhusker, Andrew received the prestigious Cletus Fischer Coaching Scholarship- due to the strong relationships he developed with men like his high school coach Rich Lemburg that inspired him to become a coach himself.

Andrew is currently Campus Athletic Director and Head Football coach at Cypress Hills high school in Houston, which competes in 6A, the largest high school class in Texas.

(Andrew Shanle and his brother Scott will be inducted into the NEMFCA Hall of Fame under the “Family Legacy '' category.)