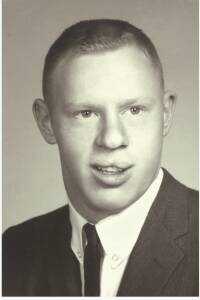 The Malcolm Meteor, the great Larry Frost. With ten flat hundred yard speed solid 200 pound frame, not many could, or wanted to, tackle him one on one in the open field......or anywhere for that matter.

From 1961 to 1964, Larry was a football player for the ages during his time as Malcolm’s do-it-all threat. He was an incredibly versatile weapon that rotated between running back and quarterback, linebacker on defense, and returning both punts and kicks on special teams. He earned 1st Team All-State honors from various media outlets and was cited as the best Eight-Man player of the 1964 season.

Frost also set a national high school record in scoring with 121 touchdowns and 765 points in his career, including nine touchdowns in a single game. Larry became the first eight-man player to earn the Nebraska Shrine Bowl’s Offensive Player of the game honors in 1965.

He then continued on his football journey by becoming a 4-year letter-winner at the University of Nebraska from 1966 to 1969, where he was named “Outstanding Back” during his senior campaign. Larry (alongside his wife Carol) went on to dedicate over 40 years of his life to coaching Nebraska High School Football. His career included several games in 8-Man territory that included stops at Mead, Lincoln Parkview Christian, and Walthill. He was previously inducted into the Nebraska High School Hall of Fame, and now The NEMFCA is honored to induct Larry into the Eight-Man Hall of Fame as well.

You had to see Larry Frost play live to realize what a rare talent this man was at the 8-Man level, specifically his senior year. Larry played for a team that ended up unrated primarily because of a 39-6 loss to Class d/8-Man #1 Norris.

I was a sophomore in high school and my GICC team played most of our home games on Saturday nights, so we had most Fridays free. I had just been issued my drivers license, so I grabbed a couple of friends and we drove to see this guy they called “The Malcolm Meteor”.

The man was incredible, simply incredible. Here is a kid weighing close to 200 pounds, runs a ten flat hundred yards, exploding out of that Malcolm backfield with a full head of steam by the time he hit the line of scrimmage. Defenders were bouncing off Frost like pin balls off of bumpers. Some simply dove at his feet to avoid the contact. It was almost humorous that night. A Man against boys.

Larry Frost was chosen to play in the Shrine Bowl and my Dad took me to the late August game in Lincoln. Larry exploded for a 74 yard touchdown on a 3rd and 1 on the South’s opening possession of the second half. One defender made a diving attempt to tackle him at the North 25. No dice.

Frost went in untouched on a third play DIVE play simply designed to get a first down deep in South territory. That was Larry Frost, and that was the only touchdown scored in that Shrine game.

Frost went on to be named the Offensive Player-of-the-Game, the first 8-Man player in history to receive the honor. Larry was a MAN against Bennett and the same against the best in the state in the 1965 Shrine Bowl.

Coach Larry Frost would always downplay his high school football accomplishments later in life when I would bug him about on the sidelines before and after games. He would just sport a faint smile and shake his head and say “that was a long time ago Bobby.”

It was a September night, the 26th to be exact, when I went to see Larry’s Lincoln Parkview Christian team play Osceola on a Thursday night. I wanted to see one of Christian’s Polivka boys (Jared?). Larry’s assistant was the incomparable Harold Simpson, the former Lincoln High head man. Carol Frost was ill and not there that evening, but Parkview won the game 38-12 and after the game finally opened a tiny bit about his glorious high school days. Not enough to give himself any credit though.

As he and I and Harold were walking off the field after the game, I said “let’s turn back the clock and have a 10 yard race and see who is the best at this point in our lives.” Of course Larry was gimping around some at that time, Harold had his notorious limp and my back had been shot for a long time.

Larry just looked at me and said “you’re living in the past Mills” and that ended that, but as I watched Larry walk off that Osceola football field, I thought about that night in Bennett and that day in Lincoln when Larry Frost was the best.

That would be the last time I ever saw Larry Frost. So I’ll tell you now like I told you then Larry…….You were good, REALLY good.

……..I kept track of a few game write-ups of runners like Larry Frost back in the day and I’ll close with a few just to illustrate how special this man was his senior season at Malcolm